During his interview with the Catalonian newspaper, Pope Francis said he was concerned about everything which has been thrown at poor Pius XII, noting the many Jews he had hidden in the convents of Rome and other Italian cities, as well as the summer residence in Castel Gadolfo. I do not mean to say that Pius XII did not make mistakes. I make many mistakes myself but his role must be read in the context of the time, Pope Francis said.

More than fifty years have now passed since the death of Pope Pius XII and his legacy remains the focus of a passionate, and sometimes acrimonious, debate among Catholic leaders, Jewish authorities and historians. The pursuit of truth and justice together paved the way for Salt+ Light Television’s documentary A Hand of Peace: Pope Pius XII and the Holocaust. Ever since German Playwright Rolf Hochhuth’s controversial 1963 play “The Deputy,” Pius XII has gradually come to be seen as something of a pariah in the public eye. The true version of events, supported by the latest historical research and the eyewitness testimony of those who lived through those perilous times, tells a vastly different story. 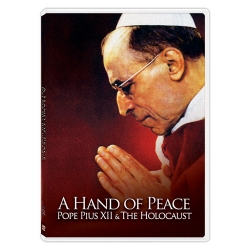 A Hand of Peace is the first film to combine rare archival footage of Pius XII, and the testimony of a wide array of experts to vindicate a great Catholic leader from the lies that have tarnished his legacy. Featuring interviews with world renowned Holocaust historian Sir Martin Gilbert; the Jesuit historian and postulator Fr. Peter Gumpel; author and ardent Pius defender Sr. Margherita Marchione, M.P.F., Ph.D., this gripping documentary explores the difficult choices Pius XII faced during the Second World War, and provides convincing proof that his bold, yet discreet, prophetic actions saved tens of thousands of Jewish lives and paved the way for a new era of Catholic-Jewish relations that have deepened over the past 50 years. The DVD is available on the Salt + Light store for $19.95. Original article New Pius XII Documentary Premiere This Sunday on S+L  was published on Nov. 22, 2008.