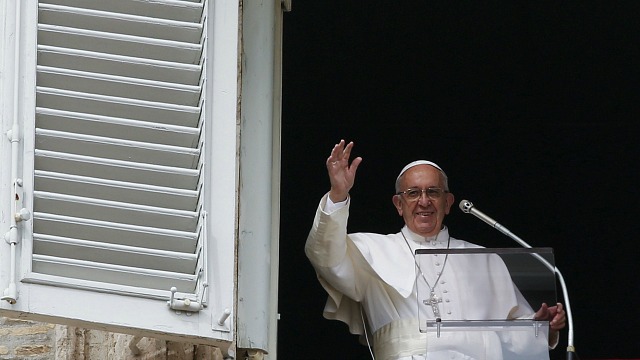 At the conclusion of the Solemn Mass for Palm Sunday, Pope Francis led the faithful in the recitation of the Angelus. In brief remarks ahead of the Marian prayer, the Holy Father greeted all those taking part in the ceremony, including those watching and listening by means of television, radio, or other means of communication. The Pope noted the 31st World Youth Day, commemorated on Sunday, which will culminate in the “great world Meeting in Krakow,” Poland, this summer. The theme of this year’s World Youth Day is “Blessed are the merciful, for they will receive mercy.” “I hope that many of you can come to Krakow, the homeland of Saint John Paul II, the founder of World Youth Day,” Pope Francis said. “We entrust to his intercession the final months of preparation for this pilgrimage, in the context of the Holy Year of Mercy, will be the Jubilee of the Young People at the level of the Universal Church.” Pope Francis also noted the many young volunteers from Krakow who were in the Square on Palm Sunday. “Returning to Poland,” he said, “they will take to the leaders of the Nation the olive branches gathered from Jerusalem, Assisi, and Montecassino” which were blessed during the ceremony, “as an invitation to cultivate proposals for peace, reconciliation, and fraternity.” He thanked them for their initiative, and encouraged them, “Go forward with courage!”