The Church certainly does her share of proclaiming saints. If you think about it, it’s an amazing act of faith--the Church, by Her relationship to the Holy Spirit is able to confidently announce that a soul is in Heaven. 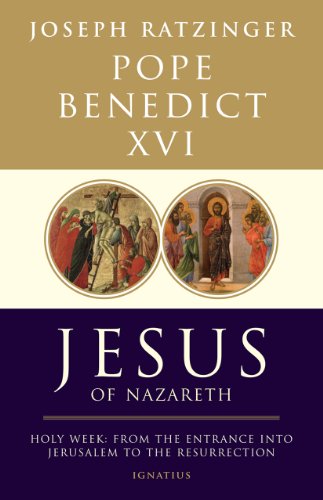 If we recall  St. Luke’s account of the good thief on the cross adjacent to Jesus; we remember that after his plea that Jesus remember him, Our Lord told him with all confidence: “This day, you will be with me in paradise.” We remember too, that he tells His disciples that whatever they bind on earth will be bound in heaven and whatever they loose on earth will be loosed in heaven. He puts complete authority in their hands and through apostolic succession, He does the same today. So, from what we know about Jesus, it is possible to know how some life stories end. Other story endings, however, have puzzled us over the millennia. One such story is that of Judas’ end. In his new book, “Jesus of Nazareth - Holy Week: from the entrance into Jerusalem to the Resurrection”, Benedict recalls the "tragic" events surrounding Judas’ betrayal of Jesus into the hands of the authorities.  As a Church, we’ve never really known what to make of this heart-wrenching betrayal; so much was unspoken and so much was not understood even by the other disciples.  So what ever became of poor Judas? The Holy Father notes that St.John’s assessment of the situation betrays his own puzzlement:

John does not offer any psychological interpretation of Judas’ conduct. The only clue he gives is a hint that Judas had helped himself to the contents of the disciples’ money box, of which he had charge (12:6). In the context of chapter 13, the evangelist merely says laconically: “Then after the morsel, Satan entered into him” (13:27). For John, what happened to Judas is beyond psychological explanation. He has come under the dominion of another. Anyone who breaks off friendship with Jesus, casting off his “easy yoke”, does not attain liberty, does not become free, but succumbs to other powers. To put it another way, he betrays this friendship because he is in the grip of another power to which he has opened himself. (p. 68)

The Holy Father closes the insightful section on the betrayal with the assertion that there were two tragedies at work here: the first was the actual betrayal and the second was Judas’ incapability to believe that forgiveness was possible for him.  Although the “light shed by Jesus into Judas’ soul was not completely extinguished”, Judas was unable to hope. Instead of showing “genuine remorse” which, the Holy Father writes  is "marked by the certainty of hope born in faith”, Judas instead "goes out into the night". The following is the entire section entitled “Mystery of the Betrayer” from Chapter 3 of “Jesus of Nazareth - Holy Week: From the entrance into Jerusalem to the Resurrection” which is set for release on March 10, 2011.