Pope in UK: Have tartan, will travel

Pope Benedict XVI donned a specially designed Papal tartan over his shoulders as he traveled from Holyroodhouse Palace to the Archbishop of Edinburgh's residence.  His route was part of a St. Ninian Day parade; the feast of the 5th century Bishop is celebrated today in Scotland. 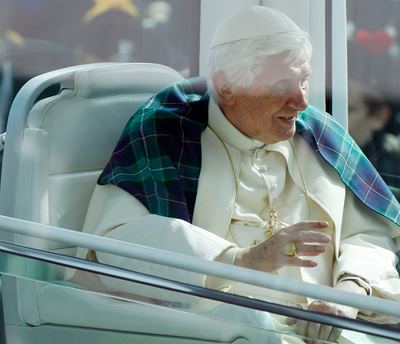 The tartan itself has great symbolism.  The white line on blue field recalls Scotland's national colours while the green reflects lichens growing on the stones of Whithorn in Galloway.  That's the location where St. Ninian first brought the Gospel to Scotland some 16oo years ago. There are also white lines accompanied by red lines, which is an acknowledgement to the colours on Cardinal Newman's coat of arms.  The yellow lines, combined with the white, are also the colours of the Vatican. Each white line on the green contains eight threads -- one for each Catholic diocese in Scotland, and there are 452 threads in the design, which represent the number of Catholic parishes. A tie or scarf was given to over 130 politicians when the tartan was unveiled last week -- First Minister Alex Salmond could be seen sporting the tartan tie this morning! - Photo CNS