Pope in UK: "We are calm" says the Vatican

As Pope Benedict XVI was meeting with students at St. Mary's University College in Twickenham, London, the news was revealed that police in London had arrested five men suspected of posing a risk to the Pope's security. 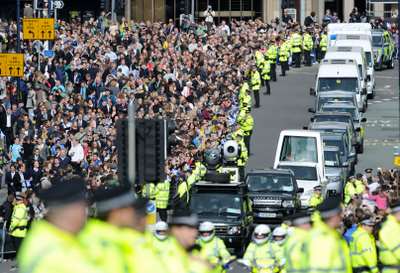 Scotland Yard, the British police force, told reporters the five men were arrested at 5:40am London time. The men, all of Algerian descent were between the ages of 24 and 50. Scotland Yard continued to search the homes of the five men, but as of noon local time nothing new had been turned up by the searches. Just after the Holy Father concluded his meeting with leaders from other religions the Vatican spokesperson Fr. Federico Lombardi spoke to journalists about the arrests. He said the Vatican had been informed of the arrests and the Pope's itinerary and security detail had been reviewed but no changes had been made. Fr. Lombardi said the pope is calm and is happy about how the visit is going. Father Lombardi added, "the situation is not particularly dangerous." Scotland Yard was continuing to search various residential and business locations and the five men were being held under under provisions of Britain's Terrorism Act. - Photo: CNS