What a whirlwind trip! After four days spent in Scotland and in England the Holy Father is bidding farewell to the faithful of the UK.
The Prime Minister of the United Kingdom, the Right Honourable David Cameron, told the Holy Father that his messages were not only heard by the Catholics of the country but also by the 60 million citizens of the United Kingdom. In his farewell speech, the Prime Minister recalled the death of his father and the birth of his daughter and reflected that we should "ask not what one can do for oneself but what one can do for others." 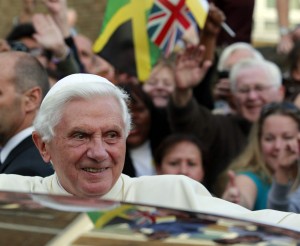 "People do not have to share a religious faith or agree with religion on everything to see the benefit of asking the searching questions that you, your Holiness, have posed to us about our society and how we treat ourselves and treat each other," the PM added. "When you think of our country, think of it as one that not only cherishes faith, but one that is deeply, but quietly, compassionate." ...and here is what the Holy Father had to say before boarding Shepherd One:

Farewell Ceremony, Birmingham Airport Address of the Holy Father Prime Minister, Thank you for your kind words of farewell on behalf of Her Majesty’s Government and the people of the United Kingdom. I am very grateful for all the hard work of preparation, on the part of both the present and the previous Government, the civil service, local authorities and police, and the many volunteers who patiently helped to prepare for the events of these four days. Thank you for the warmth of your welcome and for the hospitality that I have enjoyed. During my time with you, I have been able to meet representatives of the many communities, cultures, languages and religions that make up British society. The very diversity of modern Britain is a challenge to its Government and people, but it also represents a great opportunity to further intercultural and interreligious dialogue for the enrichment of the entire community. In these days, I was grateful for the opportunity to meet Her Majesty The Queen, as well as yourself and other political leaders, and to be able to discuss matters of common interest, both at home and abroad. I was particularly honoured to be invited to address both Houses of Parliament in the historic precincts of Westminster Hall. I sincerely hope that these occasions will contribute to confirming and strengthening the excellent relations between the Holy See and the United Kingdom, especially in cooperation for international development, in care for the natural environment, and in the building of a civil society with a renewed sense of shared values and common purpose. It was also my pleasure to visit His Grace the Archbishop of Canterbury and the Bishops of the Church of England, and later to pray with them and our fellow Christians in the evocative surroundings of Westminster Abbey, a place which speaks so eloquently of our shared traditions and culture. As Britain is home to so many religious traditions, I was grateful to have the opportunity to meet their representatives and to share some thoughts with them about the contribution that the religions can offer to the development of a healthy pluralistic society. Naturally, my visit was directed in a special way to the Catholics of the United Kingdom. I treasure the time spent with the bishops, clergy, religious and laity, and with teachers, pupils and older people. It was especially moving to celebrate with them, here in Birmingham, the beatification of a great son of England, Cardinal John Henry Newman. With his vast legacy of scholarly and spiritual writings, I am certain that he still has much to teach us about Christian living and witness amid the challenges of today’s world, challenges which he foresaw with such remarkable clarity. As I take my leave of you, let me assure you once again of my good wishes and prayers for the peace and prosperity of Great Britain. Thank you very much and God bless you all!