Pope in UK: Papal Visit to United Kingdom off to a good start

It's a grey overcast day in London, nothing new there. Despite the fact that London is home to Her Majesty Queen Elizabeth II there is undeniably an air of anticipation in the city. Although the British media has been highlighting all the reasons the Holy Father should not be visiting the UK or why taxpayers should not be paying for the visit, the reaction on the street is less cynical. One London Bobby told me this morning, "It's fantastic! As Brits we celebrate diversity in all it's forms so it's great that the Pope is coming here." Even the British media are anticipating that despite the controversy pre-trip, the Holy Father just might be welcomed with open arms. One local morning news shows cited World Youth Day 2008 in Sydney as an example of what might happen. Before the Pope's arrival in Sydney the media were highly critical of World Youth Day and the Pope's arrival. However, more people turned out to see the Pope than had turned out for the Sydney Olympics. 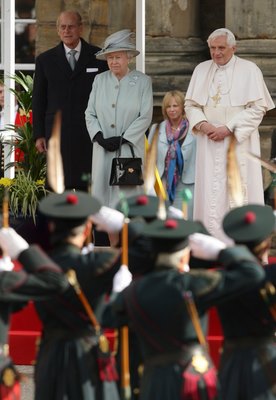 In his arrival speech at Holyrood House Palace the Pope Benedict XVI recalled Great Britain's Christian roots, pointing out that the monarchs have all been Christian.

The monarchs of England and Scotland have been Christians from very early times and include outstanding saints like Edward the Confessor and Margaret of Scotland. As you know, many of them consciously exercised their sovereign duty in the light of the Gospel, and in this way shaped the nation for good at the deepest level. As a result, the Christian message has been an integral part of the language, thought and culture of the peoples of these islands for more than a thousand years.

The Holy Father also pointed out that Britons were active in helping stop the slave trade, naming David Livingston and William Wilberforce while Florence Nightingale, he said, is an example of someone inspired by faith to strive for better standards of healthcare. Those standards, he pointed out, have been copied around the world. Great Britain has also acted on principles of justice in the political arena, standing up against "nazi tyranny" and helping push for the creation of the United Nations, examples the Holy Father also cited in his talk at Holyrood House Palace. He also called Britons, in particular British Media to continue to live out these values they have upheld for so long saying:

...because their opinions reach such a wide audience, the British media have a graver responsibility than most and a greater opportunity to promote the peace of nations, the integral development of peoples and the spread of authentic human rights. May all Britons continue to live by the values of honesty, respect and fair-mindedness that have won them the esteem and admiration of many.

After the speeches, the Holy Father traveled by Popemobile along the streets of Edinburgh where police estimate 125,000 lined the streets to greet him.  He is now at Cardinal Keith O'Brien's residence in Edinburgh for a private lunch.  There he will dine on traditional fare: haggis, neeps and tatties, roast beef, Yorkshire pudding, and apple pie.  He'll then head to Glasgow's Bellahouston Park for an open air Mass. After Mass the Pope leaves Scotland and makes his way to London where people are waiting to see just what he'll say and how he will be received. Vatican officials are pleased with how things have started.  Holy See Press Office director Fr. Federico Lombardi, SJ, told reporters it was the "best beginning of the trip that we could desire". Salt + Light returns live at noon ET with coverage of the open-air Mass.  Visit our Apostolic Journey page for all our broadcast details over the next four days, and follow us on Facebook too! - Photo CNS