Pope in UK: I have come that they may have life and have it to the full, Pope meets with teachers and students in Twickenham

It was a quaint gathering at St. Mary's College in Twickenham this morning on day 2 of Pope Benedict's visit to the UK. After having spent yesterday in Scotland, the Holy Father made his way to London and then this morning to the school in Twickenham, a suburb just west of London.
The Holy Father was greeted by thousands of smiling young faces, cheering voices, flashing cameras and roving camcorders held by eager students and teachers alike. Pope Benedict began his first speech of the day by acknowledging the "outstanding contribution made my religious men and women in this land to the noble task of education". Citing that he himself was educated by the "English Ladies" (otherwise known as the Loretto nuns), Pope Benedict expressed his deep appreciation to those who devote their lives to teaching the young. 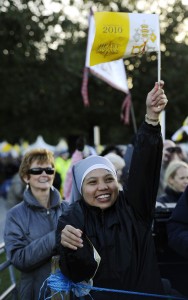 As you know, the task of a teacher is not simply to impart information or to provide training in skills intended to deliver some economic benefit to society; education is not and must never be considered as purely utilitarian. It is about forming the human person, equipping him or her to live life to the full – in short it is about imparting wisdom. And true wisdom is inseparable from knowledge of the Creator, for “both we and our words are in his hand, as are all understanding and skill in crafts” (Wis 7:16).

After his address to the teachers, the students of England and Scotland presented the Holy Father with three books; each one having special ties to the Church's history in the British Isles and each one decorated with the flags of the UK. The Holy Father, being the book lover that he is, could not have been more eager to receive such carefully-selected gifts. While in London, Pope Benedict's schedule is a packed one, to say the least. Today's schedule alone boasts of three speeches at St. Mary's University College: one addressed to teachers, one addressed to students and one addressed to religious leaders; followed by a visit with the Archbishop of Canterbury and a symbolic address in Westminster Hall, the room where St. Thomas More (a former advisor to King Henry VIII), was condemned to death for his adherence to the Catholic faith. Click here for the complete text of the Holy Father's address. Photo:CNS photo/Dylan Martinez, Reuters