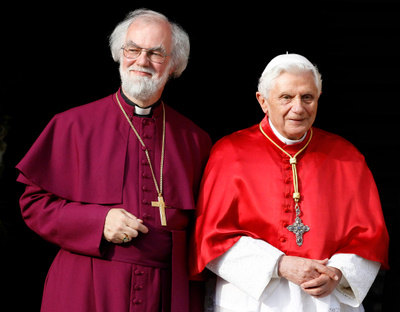 These were just three of the topics discussed in the private meeting between Pope Benedict and Archbishop Rowan Williams. Read more on the closed door meeting at Lambeth Palace from a joint communiqué released Friday afternoon:

Fifty years after the first meeting of a Pope and an Archbishop of Canterbury in modern times – that of Pope John XXIII and Archbishop Geoffrey Fisher, in December 1960 – Pope Benedict XVI paid a fraternal visit to Archbishop Rowan Williams. In the first part of their meeting they both addressed the Anglican and Roman Catholic Diocesan Bishops of England, Scotland and Wales, in the Great Hall of the Archbishop’s Library, before moving to a private meeting. In the course of their private conversation, they addressed many of the issues of mutual concern to Anglicans and Roman Catholics. They affirmed the need to proclaim the Gospel message of salvation in Jesus Christ, both in a reasoned and convincing way in the contemporary context of profound cultural and social transformation, and in lives of holiness and transparency to God. They agreed on the importance of improving ecumenical relations and continuing theological dialogue in the face of new challenges to unity from within the Christian community and beyond it. The Holy Father and the Archbishop reaffirmed the importance of continuing theological dialogue on the notion of the Church as communion, local and universal, and the implications of this concept for the discernment of ethical teaching. They reflected together on the serious and difficult situation of Christians in the Middle East, and called upon all Christians to pray for their brothers and sisters and support their continued peaceful witness in the Holy Land. In the light of their recent public interventions, they also discussed the need to promote a courageous and generous engagement in the field of justice and peace, especially the needs of the poor, urging international leadership to fight hunger and disease. Following their meeting they travelled together to the Palace of Westminster and to Evening Prayer at Westminster Abbey.