Pope in UK: A Tolkien-Newman Connection

It looks like there will be a touch of Tolkien when Pope Benedict XVI visits Birmingham, England next month. 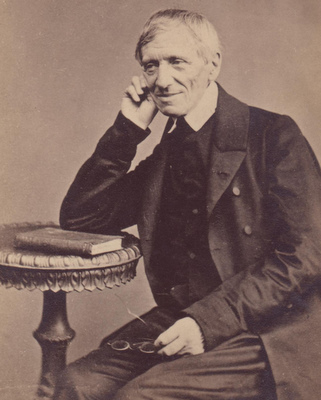 No, we're confident the Holy Father will not be quoting portions of Lord of the Rings in any homilies or addresses. However, the legendary author's great nephew, Tim Tolkien, will be sculpting a life-size statue of Cardinal John Henry Newman for Birmingham's Cofton Park. That's where the Pontiff will celebrate an open-air Beatification Mass for the holy scholar on September 19th. The steel, bronze-sprayed statue will likely be placed next to the stage, and the accomplished sculptor is hopeful the Holy Father will bless it. “It’s a great privilege," said the 47-year old, "The Pope doesn’t come often and it’s happening in this city.” Read the full article about the sculpture at the Birmingham Mail HERE. Of course, this isn't the first Tolkien-Newman connection.  The Cardinal founded the English Oratory (the Oratory of St. Philip Neri is a congregation of priests and brothers founded by St. Philip in Rome in the 16th century).  He later lived, and was buried, at the Birmingham Oratory. When his mother died, a 12-year old Tolkien was entrusted to a priest at the Birmingham Oratory (his father had died years earlier, and the family had separated themselves from them after Tolkien’s mother converted to Catholicism).  For a period Tolkien lived and attended an Oratorian run school.  In fact, there’s an amusing legend that Tolkien took great pleasure placing the house’s cat in the refectory's lazy Susan (or dumbwaiter) – offering a bit of a surprise for servers at meals! - Check back regularly to the Salt + Light blog for further updates on the trip and our broadcast details. CNS photo/courtesy Fathers of the Birmingham Oratory