Pope In Uganda: Address at Meeting with Priests, Religious and Seminarians 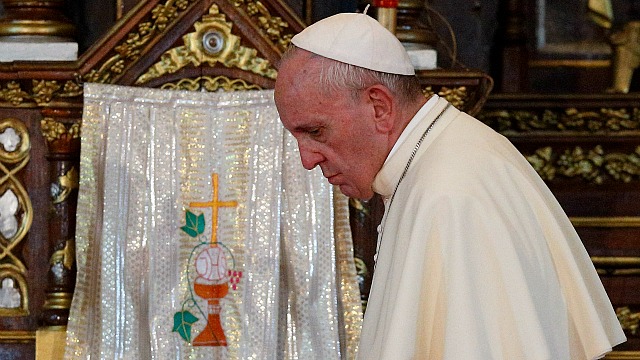 There are three things I want to tell you. First of all, in the Book of Deuteronomy, Moses reminds his people: “Don’t forget.” And he repeats it in this book various times. To not forget. To not forget everything that God did for his people.
The first thing that I want to say to you is that you ask for the grace of memory, [of remembering.] As I said to the young people: In the blood of Ugandan Catholics is mixed the blood of martyrs. Do not forget the memory of this seed. So that in this way you continue to grow.
The main enemy of memory is forgetting. But this isn’t the most dangerous enemy. The most dangerous enemy of memory is becoming accustomed to inheriting the goods of those who’ve gone before. The Church in Uganda can never become accustomed to the distant memory of its martyrs. Martyr means witness. The Church in Uganda, to be faithful to this memory, must continue to be a witness. It can’t live “piggy-backing.” The glories of the past were the beginning but you have to make the glory of the future. And this is the task that the Church gives to you. Be witnesses, as the martyrs who gave their lives for the Gospel were witnesses.
To be witnesses — the second word that I want to say to you — fidelity is necessary. Fidelity to memory. Fidelity to one’s vocation. Fidelity to apostolic zeal. Fidelity means to follow the way of holiness. Fidelity means to do what the witnesses of the past did: to be missionaries.
Perhaps here in Uganda there are dioceses that have many priests and dioceses that have few. Fidelity means offering oneself to the bishop to go to another diocese that needs missionaries. And this isn’t easy. Fidelity means persevering in the vocation. And here, I want to give thanks in a special way for the example of fidelity that the sisters from the House of Mercy gave me. Fidelity to the poor, to the ill, to the neediest. Because Christ is there.
Uganda was watered with the blood of martyrs, of witnesses. Today it is necessary to continue watering it and for this, new challenges, new testimonies, new missions.
If not, you’re going to lose the great richness that you have. And the “pearl of Africa” will end up being on display in a museum. Because the devil attacks like that — little by little. And I’m speaking not only for the priests, but also to the religious.
For the priests, I did want to speak particularly about this issue of being missionaries: That the dioceses with a lot of priests offer themselves to those with fewer clergy.
Thus, Uganda will continue to be missionary.
Memory which means fidelity and fidelity that is only possible with prayer. If a man or woman religious, a priest, abandons prayer or prays only a little, because he says he has a lot of work, he has already begun to lose memory. And he has already begun to lose fidelity.
Prayer, which also means humiliation. The humiliation of going regularly to your confessor and to say your own sins. You can’t limp with both feet. Men religious, women religious and priests cannot live a double life. If you are a sinner, ask for forgiveness. But don’t keep hidden what God doesn’t want. Don’t keep a lack of fidelity hidden away. Don’t shut memory up in a closet. Memory. New challenges, fidelity to memory. And prayer. Prayer always begins with recognizing oneself as a sinner.
With these three columns, the pearl of Africa will continue to be a pearl and not just the word missionary.
May the martyrs who gave strength to this Church help us to go forward in memory, in fidelity and in prayer.
And please, I ask you to not forget to pray for me.
Now, I invite you to pray all together an Ave Maria to the Virgin.