Pope in the Czech Republic: Visit a Success says Vatican & Highlights of the Academic Address 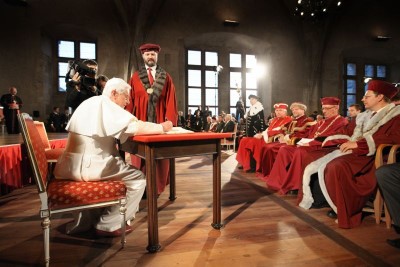 Only half way through the three day visit to the Czech Republic Pope Benedict XVI was happy with the way the visit unfolded. In a press breifing the Vatican's media spokesperson said the Holy Father was happy with way his visit had been recieved. He was especially happy that Czech President Vaclav Klaus attended all of the events on the itinerary, not the just official welcome ceremony. On Sunday, Pope Benedict flew to the city of Brno, located in the south-eastern Moravia region of the country, where he celebrated Mass with approximately 150,000 faithful. President Klaus and First Lady Livia Klausova were among those in attendance. After the Mass the Holy Father flew back to Prague for a meeting with representatives of other Christian denominations as well as two Jewish leaders. The event was not televised, perhaps due to the fact that the Holy Father's last televised Ecumenical encounter was derailed when the Chief Islamic Judge of the Palestinian Authority Sheikh Tayseer Tamimi, who was not scheduled to speak, took the podium and launched into an unscripted attack on Israel. This time the meeting was to go off smoothly. Representatives from eight different Christian denominations attended the meeting where Pope Benedict once again pointed out that this year marks the 20th anniversary of the fall of communism. He said while a just political order has been rebuilt, Christianity is still marginalized, albeit in new ways. He acknowledged it may not seem clear what the Gospel can offer the Czech Republic and reminded that the Gospel never ceases to be source of inspiration to those who put themselves at the service of their fellow humanity. Ultimately, he said, Christianity offers Salvation. "The term is replete with connotations, yet it expresses something fundamental and universal about the human yearning for well-being and wholeness. It alludes to the ardent desire for reconciliation and communion that wells up spontaneously in the depths of the human spirit," the Holy Father said, in what can be seen as yet another gentle invitation to Czech's to rediscover what their Chrisitan faith. 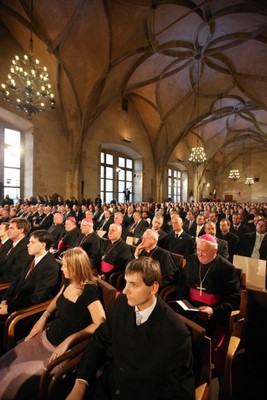 He then turned his attention to the historical figure Jan Hus and several Czech saints, pointing out that the Czech nation has a long history of both deep faith, and of conflict between faith and secularism.

Christians draw upon the example of figures such as Saint Adalbert and Saint Agnes of Bohemia. Their commitment to spreading the Gospel was motivated by the conviction that Christians should not cower in fear of the world but rather confidently share the treasury of truths entrusted to them. Likewise Christians today, opening themselves to present realities and affirming all that is good in society, must have the courage to invite men and women to the radical conversion that ensues upon an encounter with Christ and ushers in a new life of grace.

After the meeting with religious leaders the Pope Benedict moved on to a meeting with Academic leaders. Prague is home to Charles University, founded by the Emperor Charles IV in 1348. Charles university has a Catholic, a Protestant and a Hussite Faculty of Theology. Meeting with the leaders of those faculties as well as the rector of the University and other University Officials he spoke of the role of Universities in shaping society.

The great changes which swept Czech society twenty years ago were precipitated not least by movements of reform which originated in university and student circles. That quest for freedom has continued to guide the work of scholars whose diakonia of truth is indispensable to any nation's well-being.

He reminded his audience that he speaks as an academic, a former professor and as Pope, saying that in both roles he promotes the ethical and free use of reason in the search for Truth. This search for truth, he said, expresses the basic tennet of Christianity and is what gave rise to the University as an instiution

From the time of Plato, education has been not merely the accumulation of knowledge or skills, butpaideia, human formation in the treasures of an intellectual tradition directed to a virtuous life. While the great universities springing up throughout Europe during the middle ages aimed with confidence at the ideal of a synthesis of all knowledge, it was always in the service of an authentic humanitas, the perfection of the individual within the unity of a well-ordered society. And likewise today: once young people's understanding of the fullness and unity of truth has been awakened, they relish the discovery that the question of what they can know opens up the vast adventure of how they ought to be and what they ought to do.

The skills of analysis and those required to generate a hypothesis, combined with the prudent art of discernment, offer an effective antidote to the attitudes of self-absorption, disengagement and even alienation which are sometimes found in our prosperous societies, and which can particularly affect the young.

The meeting with Academic leaders was the last meeting of the day. The Holy Father was to celebrate Mass in Stara Boleslav on Monday, September 28th to mark the feast of St. Wenceslaus. - Photo by Filip Kotek @ the official Czech Republic Papal Trip Web Site