Pope in the Czech Republic: Reflecting on the Holy Father's Visit to the Infant King 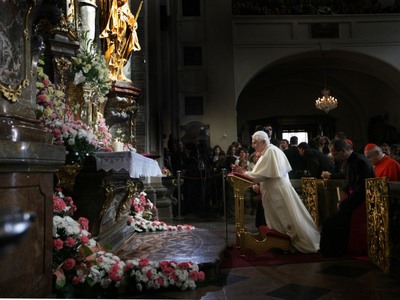 One of the highlights for me covering the Holy Father's Apostolic Journey to the Czech Republic was his visit to the Our Lady of Victory Church, and veneration of the statue of the Infant Jesus of Prague. The Infant has a special place not only in my life, but in the life of my family. We had a beautiful statue on display in our home that had been given to my parents some forty years ago as a wedding gift. Growing up, every evening we used to say a chaplet to the Infant -- three Our Fathers, 12 Hail Marys and series of other prayers. As I grew older and my own spiritual life started to grow and develop, I moved onto other devotions, and would come back only occasionally to the Infant. This past year though, He has come roaring back into my life. It may have begun with a wedding gift of the Infant statue that my wife and I now display in our home. Several months later, we made a pilgrimage to the shrine to the Infant King in Chicago. It wasn't planned to be a pilgrimage, we were simply visiting my brother-in-law who is a seminarian with the Institute of Christ the King Sovereign Priest. Their Chicago house is a shrine to the Infant King. Our time of visiting family, morphed into a time of pilgrimage and prayer, and I reacquainted myself with devotion to the Infant. Most recently, the Infant popped back into my life during Salt + Light's coverage of Pope Benedict's visit to the Czech Republic. It was when he stepped into the Church of Our Lady of Victory, where the original 47cm wood-wax statue is housed, that I realized I had never actually seen pictures of the original statue or pilgrimage Church! For me, it was a treat to see this -- even a bit of a virtual pilgrimage! The visit also offered me the opportunity to refresh myself on the history of the statue. I quote the Church's website: 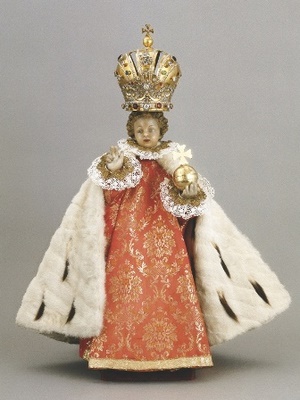 The Infant Jesus of Prague originally came from Spain. The legend tells that the Infant Jesus appeared miraculously to a certain monk, who modeled the statue based on the appearance of the apparition. According to another legend the statue belonged to St. Teresa of Avila, the founder of the Discalced Carmelites, who was aflame with a great love for the Child Jesus. She is said to have given the statue to a friend of hers, whose daughter was setting out to travel to Prague. When the Duchess Maria Manrique de Lara came to Bohemia to marry a Bohemian nobleman in 1556, she received the statue from her mother as a wedding gift. When her daughter Polyxena of Lobkowicz was widowed, she gave the precious statue to the monastery of the Discalced Carmelites attached to the church of Our Lady of Victory in 1628. The Carmelites placed the statue in the novitiate chapel, so that the young monks could learn from the virtues of the Child Jesus. At that time the Thirty Years' War was raging through Europe and even the Infant Jesus was not spared when the Saxon army occupied Prague in 1631. It was only after his return to Prague in 1637 that Father Cyril of the Mother of God, originally from Luxemburg, discovered the statue, abandoned in a corner. To his sorrow, however, he found that the Infant Jesus had had both hands broken off. At this moment it seemed to him that the Infant Jesus was saying to him: Have mercy on me and I will have mercy on you. Give me hands and I will give you peace. The more you honour me, the more I will bless you. Eventually Father Cyril had new hands made for the Infant Jesus. The gold coin invested in this was returned many times over, as the Child Jesus began to bless the monastery, the local people, and the whole of Prague. Miraculous healings were attributed to him, as was the protection of Prague when it was laid siege to by the Swedes in 1639. In 1651 the statue was carried as a pilgrim round all the churches in Prague and in 1655 it was solemnly crowned by the Bishop of Prague. This event is still remembered today on the anniversary feast-day, falling on the first Sunday in May.

As you see from the history -- a statue of the Infant of Prague is an appropriate wedding gift! As well, it is maintained that if you display an image of the Infant in your home, you will never be in material need -- much like the monastery was blessed "many times over" for the gesture that was given to the Infant. In my research for the Pope's journey, I also found an interesting article from Zenit quoting Prior Petr Sleich of the Carmelite monastery of the Holy Infant of Prague. He speculated that it was appropriate that the Pontiff begin his Czech Republic visit with the Infant. A country that is one of the least religious nations of Europe and is becoming increasingly more secularized, the Prior suggested that many in the nation may be uncertain when it comes to God. However, he noted that people can understand the Infant Jesus and He can draw people in to a real encounter with Christ:

"When people come here to our church and see God as a Child, they have no fear of him," the Carmelite observed. "On the contrary, he is a child who needs our love, our hearts, our hands, our help."

It's a wonderful insight -- it is easy for us to be drawn in by this Infant King; to get to know Christ more! This was also the Pope's message in his address to those gathered at Our Lady of Victory Church. He specifically addressed families, and children, but had a message for everyone:

The figure of the Child Jesus, the tender infant, brings home to us God's closeness and his love. We come to understand how precious we are in his eyes, because it is through him that we in our turn have become children of God. Every human being is a child of God and therefore our brother or sister, to be welcomed and respected. May our society grasp this truth! Every human person would then be appreciated not for what he has, but for who he is, since in the face of every human being, without distinction of race or culture, God's image shines forth.