Pope in the Czech Republic: Day One Draws to a Close 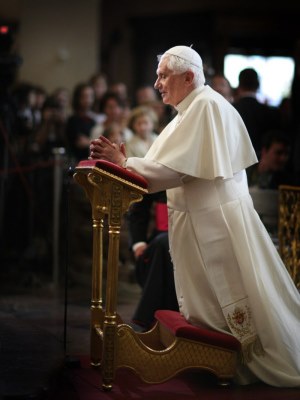 Day one of Pope Benedict XVI's Apostolic Voyage to the Czech Republic has come to an end. The day began at Stará Ruzyn, the largest airport in the Czech Republic, 10kms outside of Prague's city centre. The Holy Father was greeted by Czech President Václav Klaus and his wife Livia, Cardinal Miloslav Vlk, as well as other Church and government officials. At the airport, the President, and Pope Benedict also acknowledged that this trip comes on the 20th anniversary of the fall of communism in the country. The Pontiff noted some of the great flames of faith during that time period:

... the cost of forty years of political repression is not to be underestimated. A particular tragedy for this land was the ruthless attempt by the Government of that time to silence the voice of the Church. Throughout your history, from the time of Saint Wenceslaus, Saint Ludmila and Saint Adalbert to the time of Saint John Nepomuk, there have been courageous martyrs whose fidelity to Christ spoke far louder and more eloquently than the voice of their executioners. This year marks the fortieth anniversary of the death of the Servant of God Cardinal Josef Beran, Archbishop of Prague. I wish to pay tribute both to him and to his successor Cardinal František Tomášek, whom I had the privilege of knowing personally, for their indomitable Christian witness in the face of persecution. They, and countless brave priests, religious and lay men and women kept the flame of faith alive in this country. Now that religious freedom has been restored, I call upon all the citizens of this Republic to rediscover the Christian traditions which have shaped their culture, and I invite the Christian community to continue to make its voice heard as the nation addresses the challenges of the new millennium. "Without God, man neither knows which way to go, nor even understands who he is" (Caritas in Veritate, 78). The truth of the Gospel is indispensable for a healthy society, since it opens us to hope and enables us to discover our inalienable dignity as God’s children.

The Pope traveled then to the heart of the city to venerate the statue of the Infant Jesus of Prague, at the Church of Our Lady of Victory. In the address that the Pontiff delivered he spoke specifically to young children, and to families.

Our reflections should lead us to prayer, as we call upon the Child Jesus for the gift of unity and harmony for all families. We think especially of young families who have to work so hard to offer their children security and a decent future. We pray for families in difficulty, struggling with illness and suffering, for those in crisis, divided or torn apart by strife or infidelity. We entrust them all to the Holy Infant of Prague, knowing how important their stability and harmony is for the true progress of society and for the future of humanity.

The vast Castle of Prague then played host to a closed door meeting with President Klaus, after which he spoke to civic authorities and diplomats. In that speech he encouraged those gathered to remember the Christian roots of the land as they look to the future. He acknowledged that tensions, misunderstandings, and wars have played out in the region, but acknowledged that Christianity has been a great source of healing.

Christian roots have nourished a remarkable spirit of forgiveness, reconciliation and cooperation which has enabled the people of these lands to find freedom and to usher in a new beginning, a new synthesis, a renewal of hope. Is it not precisely this spirit that contemporary Europe requires?

The final event of the day was a moving Vespers in a packed Cathedral of Sts. Vitus, Wenceslaus, and Adalbert. The Holy Father was joined by priests, deacons, men and women religious, seminarians and representatives of lay movements. The Pope referred to those who struggled for the faith under communism and acknowledged that there is still difficulty today.

... you are well aware that even today it is not easy to live and bear witness to the Gospel. Society continues to suffer from the wounds caused by atheist ideology, and it is often seduced by the modern mentality of hedonistic consumerism amid a dangerous crisis of human and religious values and a growing drift towards ethical and cultural relativism. In this context there is an urgent need for renewed effort throughout the Church so as to strengthen spiritual and moral values in present-day society. I know that your communities are already actively engaged on several fronts, especially in charitable work, carried out under the auspices of Caritas. Your pastoral activity in the field of educating new generations should be undertaken with particular zeal. Catholic schools should foster respect for the human person; attention should also be given to the pastoral care of young people outside the school environment, without neglecting other groups of the faithful. Christ is for everyone!

Visit the Catholic News Service blog for full Vatican text of the speeches: Be sure to stay tuned to our ongoing coverage of Pope Benedict XVI's Apostolic Journey to the Czech Republic! The Pontiff visits Brno on Sunday, and Monday, September 28th, will celebrate Holy Mass on the feast day of St. Wenceslaus, a patron and national hero of the Czech Republic. - Photo by Filip Kotek @ the official Czech Papal Trip Web Site