Pope in Spain: Mass in the Plaza del Obradoiro 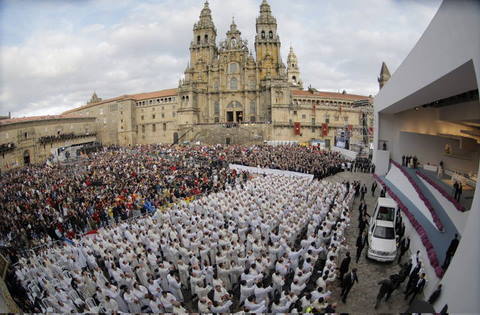 The first Mass of the Pope's Apostolic Visit to Spain took place in Obradoiro Square next to the Cathedral of Santiago de Compostela. The square was filled to capacity with over 7,000 people  present, including an estimated 600 priests and 100 Cardinals and Bishops. Another 20,000 people were in the vicinity for the event. The Archbishop of Santiago de Compostela welcomed the Holy Father in the local Galician language.  In his address, the Archbishop warmly thanked the Pope for his visit, saying that their desire to have him join them had finally come true. He called Pope Benedict a pilgrim of faith and witness of the risen Christ.  He reflected on some of the oldest Christian pilgrimages in our history. He said Jerusalem, Rome and Santiago are routes for the man who refuses to choke on materialism. He reiterated Pope Benedict's earlier remarks inside the Cathedral; that the country of Spain needs  a revitalization of its faith. He says the Church is Spain must find the strength to go on a pilgrimage to re-evangelize. The music throughout the Mass was performed by the Royal Philharmonic Orchestra of Galicia, accompanied by the Choir of the Cathedral of Santiago de Compostela. The music was all performed in a classical style, known to be the Pope's favourite type of music. One of their pieces was a beautiful rendition of Mozart's Kyrie Eleison. Pope Benedict's Homily focused on the Christian roots of European Continent. He called for a return to faith and a rejection of Western secularism.  The Pope once again called himself a pilgrim among pilgrims who are thirsting for faith. The pilgrim symbol resonated throughout the Pope's Homily. 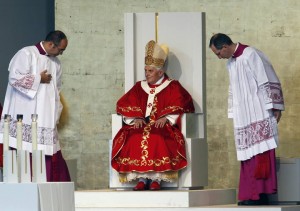 Find the full text below:

The remainder of Pope Benedict's time in Santiago de Compostela will include a private meeting with the leader of the Spanish political opposition party in the sacristy. He will then make his way back to airport and head to Barcelona. If you missed today's events we'll be airing a REPEAT of the Pope's visit to the Cathedral of Santiago de Compostela TONIGHT @ 8 pm ET And a REPEAT of the Mass in the Plaza de Obradoiro at 9pm ET CLICK HERE for all the programming details Photos: EFE, RTVE