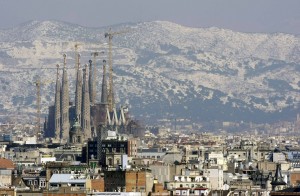 It was an event over 120 years in the making. A day that Catalan architect, Antoni Gaudi had always dreamed about. The day that the greatest work of his life and career would be consecrated by the leader of the Catholic Church.
The Sagrada Familia Church garners over 4 million visitors a year, but up until today it was not considered to be a legitimate place of worship due to its incomplete construction. Many factors have delayed the construction of the Church; the untimely death of Antoni Gaudi, its primary architect, the obstacles for various architects in attempting to achieve Gaudi's vision for the Church, funding and resources. The Church is expected to be completely finished for 2026. The current chief architect, Jordi Bonet Armengo said he hopes the Pope's visit will boost funding for the Church's completion which comes from private donors and tourists. Sagrada Familia will be the tallest Church in the world once its construction is complete. 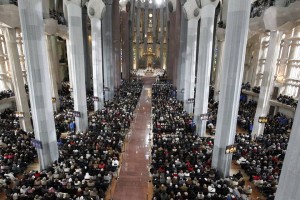 Today's Mass and Consecration ceremony began with opening addresses from the Archbishop of Barcelona, Cardinal Lluis Martinez Sistach and the current architect Jordi Bonet Armengo. The ceremony was one of great reverence, accounting for the solemnity of the Consecration and its historical significance for the Church.  The Pope spread holy oil along the Church altar thus performing the rite of Consecration. Over 6,500 people were present inside the Church, with tens of thousands watching the Mass outdoors on a large screen in the square.
A repeat of the Mass will air TONIGHT at 7:30 pm ET
CLICK HERE for programming details. 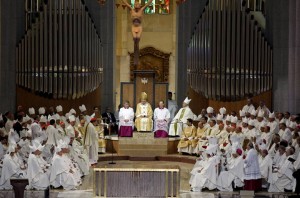 The Pope's Homily recalled the role and history of the Church structure as well as the significance of the Sagrada Familia Church. He praised the architect Antoni Gaudi for his ability to bring the realms of man and God together in his work.  he described Gaudi's use ofthe elements of nature throughout the Sagrada Familia combined together with the sacred images of Jesus' birth, passion, death and resurrection. An interesting parallel between Saint André of Montreal and Antoni Gaudi arose in the homily. The Pope remarked that Gaudi dedicated the Church to St. Joseph and would not live to see its completion, just as Br. André dedicated the Oratory in Montreal to St. Joseph and did not live to see its completion. Both Saint André and Gaudi are interred in their respective projects. Pope Benedict also said it was particularly significant that he is the Pope performing the dedication of the Basilica, because his baptismal name is after all, Joseph.
Read the FULL TEXT of the Pope's Homily below:

Finally, I wish to commend to the loving protection of the Mother of God, Mary Most Holy, April Rose, Mother of Mercy, all who enter here and all who in word or deed, in silence and prayer, have made this possible this marvel of architecture.  May Our Lady present to her divine Son the joys and tribulations of all who come in the future to this sacred place so that here, as the Church prays when dedicating religious buildings, the poor may find mercy, the oppressed true freedom and all men may take on the dignity of the children of God.  Amen.