Twice during our coverage of Pope Benedict’s trip to Spain this past weekend, S+L interviewed Carol Glatz from Catholic News Service. Glatz covered the papal visit as one of the Vatican Accredited Media Personnel (VAMP). She was among 61 reporters, photographers and cameramen who were privy to a much closer view of the Pope than the other 2000 accredited media. 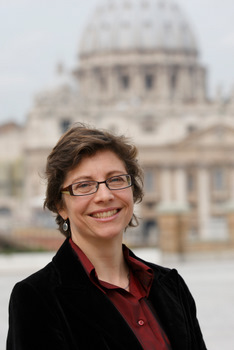 The VAMP experience is no holiday. Along with David Naglieri, I was accredited to the press corps for S+L’s coverage of the papal visit to the United States in 2008. The Vatican press corps enjoys access to embargoed texts before other media—provided we pick up our copies at the prescribed time, well before dawn. An intimidating official commands the press pool’s movements with military efficiency. Still, given that David and I were already in North America, we were not among those on the papal plane arriving from Rome, and so we missed out on one of the most thrilling opportunities for a Catholic journalist: the customary in-flight news conference with the Pope. Though this question and answer session is not guaranteed, the Holy Father did not disappoint on his trip to Spain. “Everyone is very excited,” says Glatz of the atmosphere on board Shepherd One. She explains that that the pontiff always answers the questions off-the-cuff. Journalists send them in advance to the Holy See Press Office. It's director, Fr. Federico Lombardi, sometimes synthesizes similar queries, which was the case with one of Glatz’s submissions that was answered by the Pope. “It's assumed that Fr. Lombardi tells the Pope ahead of time what the questions are about,” says Glatz. “Maybe he submits them to Msgr. Georg Gänswein [the Pope’s personal secretary], but that is speculation.” Judging by the thoughtfulness of Pope Benedict's responses, it’s evident that, in any regard, these are topics he has been reflecting upon. Here is the full transcript of the Q&A, as published by the Vatican Information Service. Read on for the Pope's clear indication about whether he expects to return to Spain next year for World Youth Day.