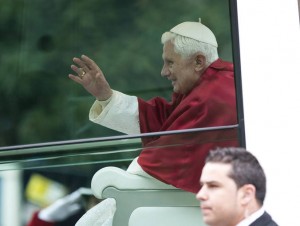 And then it was time for Spain to say goodbye to Pope Benedict, at least until next year for World Youth Day Madrid.   Upon his arrival at the International airport of Barcelona, the Pope  had a private meeting with the President of the Spanish Government, Jose Luis Rodriguez Zapatero. King Juan Carlos I of Spain gave the farewell address to the Pope. He  thanked him for his love and fraternity. The King also expressed his enthusiasm for the special events the Pope took part in over the weekend. He finished by saying 'see you soon!', referring to next year's World Youth Day, Madrid. In his farewell address, Pope Benedict thanked the people of Spain for their hospitality. He expressed his gratitude for the gestures of warmth and affection that he received throughout the visit. He also highlighted his experiences in the cities of Santiago de Compostela as a pilgrim to the Cathedral and in  Barcelona where he consecrated the Church of the Sagrada Familia. Read his full address below:

Farewell Ceremony, International Airport of Barcelona Nov 7 2010 Address of the Holy Father Your Majesties, Your Eminences the Archbishop of Barcelona and the Cardinal President of the Spanish Bishops’ Conference, Dear Brother and Sisters, Dear Friends, Thank you very much.  I wish to convey in these brief words my deep sentiments of gratitude at the conclusion of my visit to Santiago de Compostela and Barcelona.  I thank Your Majesties for coming here today.  I am grateful to Your Majesty for your gracious words in which you expressed the affection of this noble people to the Successor of Peter.  I also wish to express my heartfelt gratitude to the authorities present, to the Archbishops of Santiago de Compostela and Barcelona, to the Spanish Bishops and to all those who, without counting the cost, have helped to bring this journey to a happy conclusion.  I am grateful for the many constant and touching gestures of attention offered in these days to the Pope, clear signs of the openness and hospitality characteristic of the people of these lands so dear to my heart. At Compostela, as a pilgrim, I joined the many people from Spain and Europe and elsewhere who come to the tomb of the apostle to fortify their faith and to receive forgiveness and peace.  As Peter’s Successor I also came to strengthen my brothers and sisters in the faith that at the very dawn of Christianity came to these lands and took such deep root that it has constantly shaped the spirit, customs, art and character of its peoples.  The preservation of this rich spiritual patrimony demonstrates the love of your country for its history and culture, yet it is also a privileged way of transmitting to younger generations those fundamental values so necessary for building up a common future of harmony and solidarity. The paths that cross Europe on the way to Santiago differed greatly, each marked by its own language and its particular characteristics, but the faith was the same.  There was a common language, the Gospel of Christ.  In any place pilgrims could feel at home.  Beyond national differences, they knew that they were members of one great family to which the other pilgrims and people along the way also belonged.  May this faith find new vigour on this continent and become a source of inspiration.  May it give rise to an attitude of solidarity towards all, especially towards those communities and nations in greater need. [in Catalan:] Here in Barcelona, I have had the immense joy of consecrating the Basilica of the Sagrada Familia, which Gaudí conceived as a monument of praise in stone to God.  I also visited an important charitable institution of the Church. They stand in today’s Barcelona as two symbols of the fruitfulness of that faith which has marked this people deeply and which, through charity and the mystery of God’s beauty, contributes to the creation of a society more worthy of man.  Truly, beauty, holiness and the love of God enable people to live with hope in this world. I return to Rome after visiting only two places in this beautiful country.  Nevertheless, in my thoughts and prayers, I have wished to embrace all Spaniards without exception and all those born elsewhere but now living here.  I hold all of you in my heart and I pray for you, especially for those who suffer.  I place you under the maternal protection of Mary Most Holy, so greatly venerated and invoked in Galicia, Catalonia and throughout Spain.  I ask her to obtain for you from Almighty God abundant heavenly gifts, that you may live as one family, guided by the light of faith.  I bless you in the name of the Lord.  With his help, we will meet again next year in Madrid, to celebrate World Youth Day.  Adios!

The Holy Father then boarded the Papal plane back to Rome's Ciampino airport and headed back to the Vatican. After a busy few weeks of Canonizations, a Synod on the Middle East, appointments, resignations and a whirlwind trip/mini-pilgrimage to Spain, I'd say he's due for some much needed rest. If you missed any of today's events CLICK HERE for repeat times later on in the day. Photo: EFE