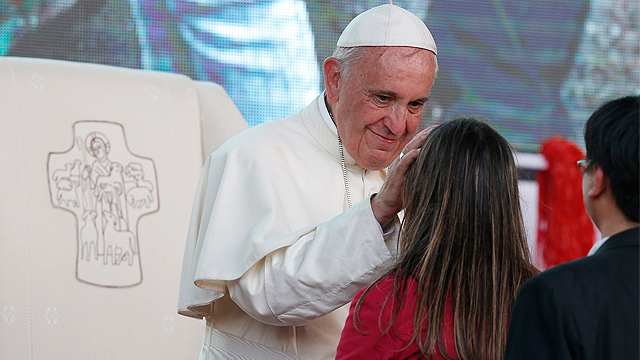 Below you will find the full text of Pope Francis' impromptu address to the youth in Paraguay:

Note from Fr. Thomas Rosica:
As promised in the previous bulletin, I am sending you a summary of Pope Francis’ unscripted remarks to over 600,000 young people gathered the riverfront near the Presidential Palace for the final event of his Apostolic Journey. The meeting consisted of an allegorical representation of the situation of young people today.  Responding to questions from the testimony of a young woman and man, Liz and Manuel, and a third young man, Orlando, who read the Gospel of the Beatitudes, Pope Francis set aside his prepared remarks saying: "speeches are boring." He than gave a stirring address to the huge crowd.
Allow me to speak as one who led a World Youth Day in Canada in 2002, and one who has worked on several World Youth Days and large youth events in several countries.  I have never experienced anything as I did this evening. Pope Francis connected with the crowd, and indeed with young people around the world.  This evening’s meeting with young people was a fitting conclusion to a remarkable homecoming of sorts for a man whom the Cardinals chose from the ends of the earth in 2013. Thanks to the ZENIT International News Service for this report.  A full transcipt of the Pope’s remarks will be forthcoming.