Pope in Mauritius: Meeting with the Authorities, Civil Society and the Diplomatic Corps 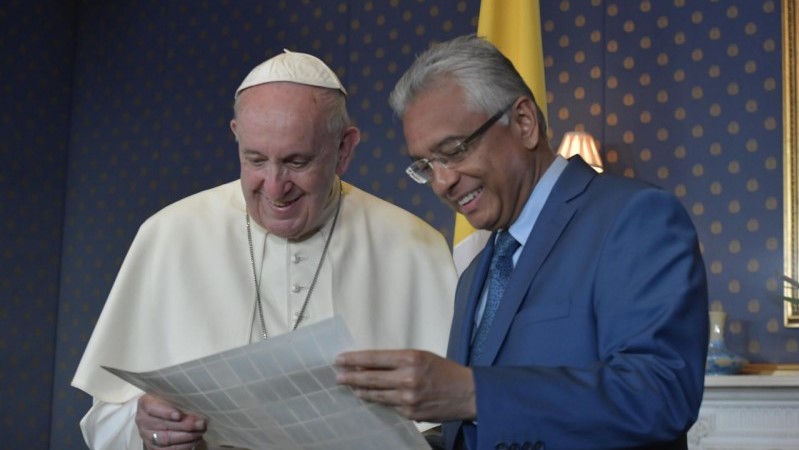 Pope Francis with the Prime Minister of Mauritius during his Apostolic Visit on Sept. 9, 2019 (Vatican Media)
Mr President, Mr. Prime Minister, Honourable Members of Government and the Diplomatic Corps, Distinguished Representatives of Civil Society and the different Religious Confessions, Ladies and Gentlemen, I offer a cordial greeting to the authorities of the State of Mauritius and I thank them for the invitation to visit your Republic. I thank the Prime Minister for his kind words and for the reception that he and the President accorded to me. I greet the Members of Government, the representatives of civil society, and the Diplomatic Corps. I would also acknowledge the presence among us of representatives of other Christian confessions and of the different religions present in Mauritius, and I thank them fraternally. Thanks to this brief visit, I have the pleasure of encountering your people, known not only for cultural, ethnic and religious diversity, but above all for the beauty born of the ability to acknowledge, respect and harmonize existing differences in view of a common project. This sums up the history of your people, born of the arrival of migrants from different horizons and continents who brought their own traditions, cultures and religions, and gradually learned to be enriched by the difference of others and to find ways of living together and striving to build a society committed to the common good. In this regard, you possess an authoritative voice, one that has taken on life. A voice that can remind us that it is possible to achieve lasting peace when we start with the conviction that “diversity is a beautiful thing when it can constantly enter into a process of reconciliation and seal a sort of cultural covenant resulting in a ‘reconciled diversity’” (Evangelii Gaudium, 230). This in turn serves as a foundation for the opportunity to build true fellowship within the greater human family, without feeling the need to marginalize, exclude or reject anyone. Your people’s DNA preserves the memory of those movements of migration that brought your ancestors to this island and led them to be open to differences, to integrate them and to promote them for the benefit of all. For this reason, I encourage you, in fidelity to your roots, to take up the challenge of welcoming and protecting those migrants who today come looking for work and, for many of them, better conditions of life for their families. Make an effort to welcome them, following the example of your ancestors, who welcomed one another. Be protagonists and defenders of a true culture of encounter that enables migrants (and everyone) to be respected in their dignity and their rights. 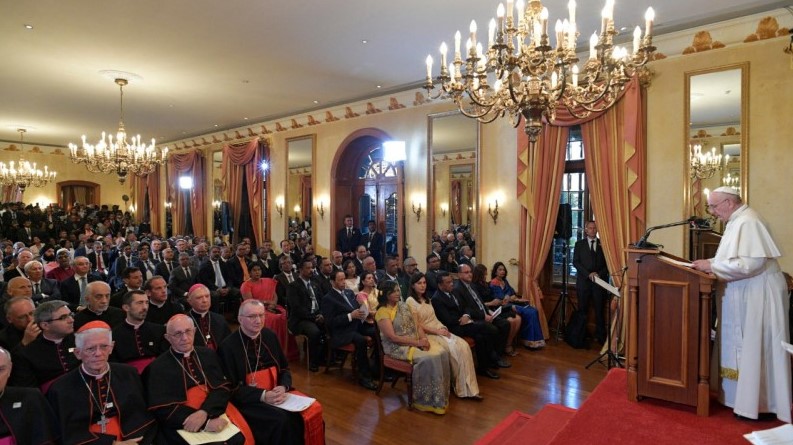 Pope Francis speaks during a Meeting with Authorities, Civil Society and the Diplomatic Corps in Mauritius on Sept. 9, 2019 (Vatican Media)
Recalling the recent history of your people, I would like to render homage to the democratic tradition that took root following your independence and that helps to make Mauritius a haven of peace. I express the hope that this art of living democracy can be cultivated and developed, especially by resisting every form of discrimination. For “authentic political life, grounded in law and in frank and fair relations between individuals, experiences renewal whenever we are convinced that every woman, man and generation brings the promise of new relational, intellectual, cultural and spiritual energies” (Message for the 2019 World Day of Peace, 1 January 2019). May those of you engaged in the political life of the Republic of Mauritius be examples to the men and women who count on you, and in particular to the young. By your conduct and your determination to combat all forms of corruption, may you demonstrate the grandeur of your commitment in service to the common good, and always be worthy of the trust placed in you by your fellow citizens. Since its independence, your country has experienced a steady economic development that should certainly be a reason to rejoice, but also to be on guard. In the present context, it appears that economic growth does not always profit everyone and even sets aside – by certain of its mechanisms and processes – a certain number of people, particularly the young. That is why I would like to encourage you to promote an economic policy focused on people and in a position to favour a better division of income, the creation of jobs and the integral promotion of the poor (cf. Evangelii Gaudium, 204). To encourage you not to yield to the temptation of an idolatrous economic model that feels the need to sacrifice human lives on the altar of speculation and profit alone, considering only immediate advantage to the detriment of protecting the poor, the environment and its resources. This entails moving forward with that constructive approach that, as Cardinal Piat wrote on the fiftieth anniversary of Mauritius’ independence, works for an integral ecological conversion. A conversion that seeks not only to avoid terrible climatic phenomena or extreme natural catastrophes, but also to promote a change in the way we live, so that economic growth can really benefit everyone, without the risk of causing ecological catastrophes or serious social crises. Ladies and Gentlemen, I would like to express my appreciation for the way that here in Mauritius the different religions, while respecting their specific identities, work hand-in-hand to contribute to social harmony and to uphold the transcendent value of life against every kind of reductionism. And I express once more the desire of the Catholics of Mauritius to continue to participate in this fruitful dialogue that has so deeply marked the history of your people. Thank you for your witness. Once again, I thank all of you for your warm welcome. I ask God to bless your people and every effort you make to foster the encounter of different cultures, civilizations and religious traditions in the promotion of a just society, one that does not forget its young and, above all, those who are most vulnerable. May God’s love and mercy continue to accompany you and to protect you! 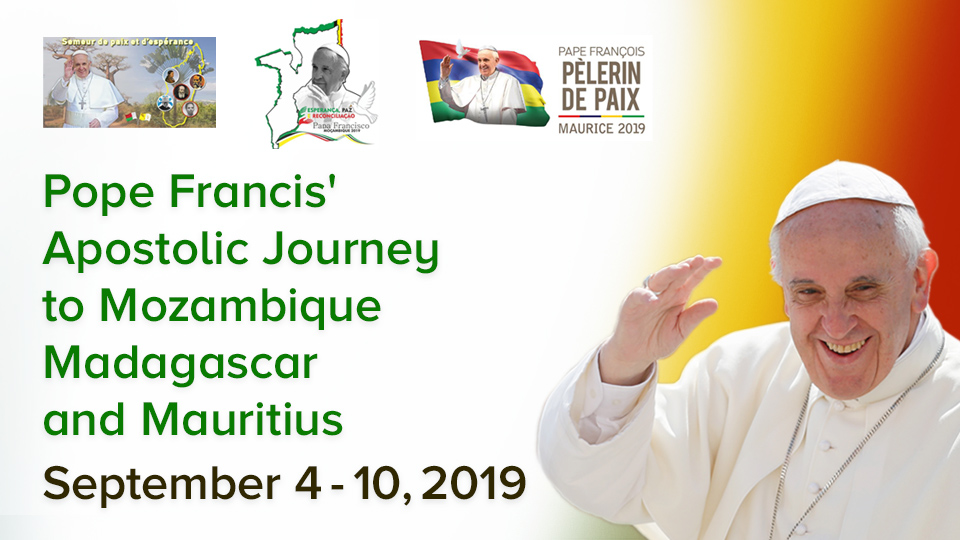