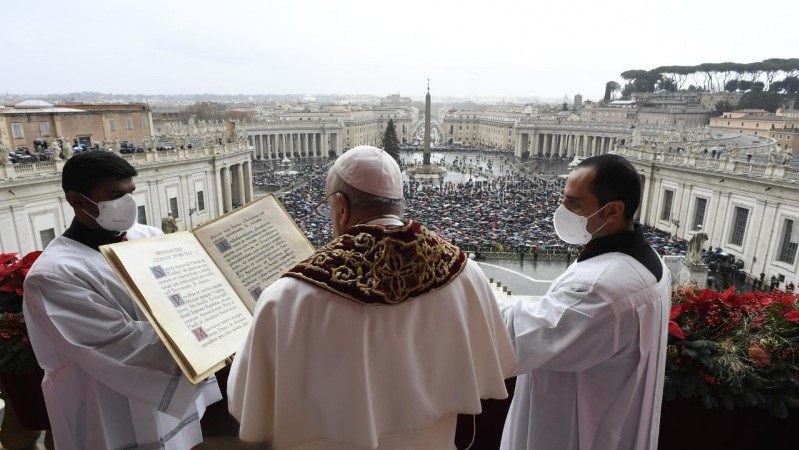 At noon on December 25, 2021, Pope Francis gave the traditional Christmas blessing "urbi et orbi" (to the city and to the world) from the central loggia (also known as the Loggia of the Blessings) of St. Peter's Basilica in the Vatican. As is also traditional, the Holy Father delivered a Christmas message to all the faithful before giving his apostolic blessing. Read below the full text of his message for Christmas 2021:

Dear brothers and sisters, Happy Christmas! The Word of God, who created the world and who gives meaning to history and to humanity’s journey, became flesh and came to dwell among us. He came like a whisper, like the murmur of a gentle breeze, to fill with wonder the heart of every man and woman who is open to this mystery. The Word became flesh in order to dialogue with us. God does not desire to carry on a monologue, but a dialogue. For God himself, Father, Son and Holy Spirit, is dialogue, an eternal and infinite communion of love and life. By the coming of Jesus, the Person of the Word made flesh, into our world, God showed us the way of encounter and dialogue. Indeed, he made that way incarnate in himself, so that we might know it and follow it, in trust and hope. Sisters and brothers, “what would our world be like without the patient dialogue of the many generous persons who keep families and communities together?” (Fratelli Tutti, 198). In this time of pandemic, we have come to realize this more and more. Our capacity for social relationships is sorely tried; there is a growing tendency to withdraw, to do it all by ourselves, to stop making an effort to encounter others and do things together. On the international level too, there is the risk of avoiding dialogue, the risk that this complex crisis will lead to taking shortcuts rather than setting out on the longer paths of dialogue. Yet only those paths can lead to the resolution of conflicts and to lasting benefits for all. Indeed, even as the message of the birth of the Saviour, the source of true peace, resounds in our hearts and in the whole world, we continue to witness a great number of conflicts, crises and disagreements. These never seem to end; by now we hardly even notice them. We have become so used to them that immense tragedies are now being passed over in silence; we risk not hearing the cry of pain and distress of so many of our brothers and sisters. 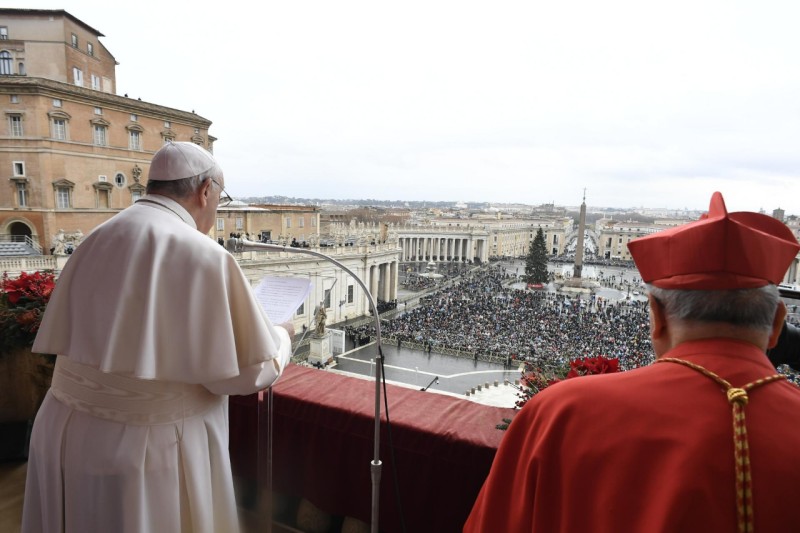 Pope Francis delivers his message before the traditional Christmas Urbi et Orbi blessing from St. Peter's Basilica in the Vatican on December 25, 2021. Photo courtesy of Vatican Media.
Let us think of the people of Syria, who for more than a decade have experienced a war that has resulted in many victims and an untold number of displaced persons. Let us look to Iraq, which still struggles to recover from a lengthy conflict. Let us listen to the cry of children arising from Yemen, where an enormous tragedy, overlooked by everyone, has silently gone on for years, causing deaths every day. Let us recall, too, the continuing tensions between Israelis and Palestinians that drag on without a resolution, with ever more serious social and political consequences. Nor should we forget Bethlehem, the place of Jesus’ birth, which is experiencing hardship also from the economic repercussions of the pandemic, preventing pilgrims from visiting the Holy Land and adversely affecting the life of the people. Let us think of Lebanon, which is undergoing an unprecedented crisis, accompanied by very troubling economic and social conditions. Yet, in the heart of the night, look! The sign of hope! Today, “the Love that moves the sun and the other stars” (Paradiso, XXXIII, 145), as Dante says, became flesh. He came in human form, he shared in our plight and he broke down the wall of our indifference. In the cold of the night, he stretches out his tiny arms towards us: he is in need of everything, yet he comes to give us everything. Let us ask him for the strength to be open to dialogue. On this festive day, let us implore him to stir up in the hearts of everyone a yearning for reconciliation and fraternity. Let us now turn to him in prayer. 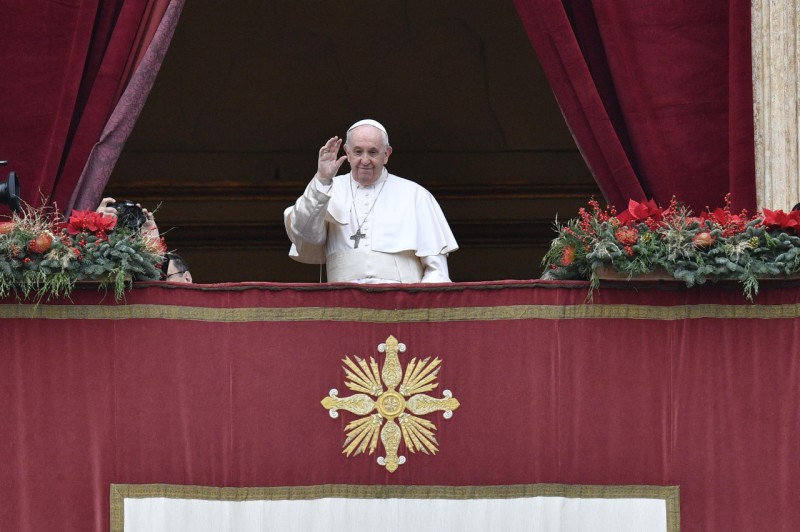 Pope Francis greets the crowd in St. Peter's Square in the Vatican on December 25, 2021. Photo courtesy of Vatican Media.
Baby Jesus, grant peace and concord to the Middle East and the whole world. Sustain all those who provide humanitarian aid to peoples forced to flee from their homelands; comfort the Afghan people, who for more than forty years have been sorely tested by conflicts that have driven many to leave the country. King of all peoples, help political authorities bring peace to societies roiled by tension and conflict. Sustain the people of Myanmar, where intolerance and violence not infrequently target the Christian community and its places of worship, clouding the peaceful countenance of that people. Be a source of light and support for all those who believe in and strive, despite all obstacles, to advance encounter and dialogue. In Ukraine, prevent fresh outbreaks of a long-festering conflict. Prince of Peace, help Ethiopia to find once again the path of reconciliation and peace through a forthright encounter that places the needs of the people above all else. Listen to the plea of those living in the Sahel region, who experience the violence of international terrorism. Turn your gaze to the peoples of the countries of North Africa, tormented by divisions, unemployment and economic inequality. Alleviate the pain of our many brothers and sisters who suffer from internal conflicts in Sudan and South Sudan. Grant that, through dialogue, mutual respect and recognition of the rights and cultural values of every human being, the values of solidarity, reconciliation and peaceful coexistence may prevail in the hearts of the peoples of the Americas. Son of God, comfort the victims of violence against women, which has increased in this time of pandemic. Offer hope to young children and adolescents suffering from bullying and abuse. Show consolation and warmth to the elderly, especially those who feel most alone. Give serenity and unity to families, the first educators of their children and the basis of the fabric of society. God-with-us, grant health to the infirm and inspire all men and women of good will to seek the best ways possible to overcome the current health crisis and its effects. Open hearts to ensure that necessary medical care – and vaccines in particular – are provided to those peoples who need them most. Repay those who generously devote themselves to caring for family members, the sick and the most vulnerable in our midst. Child of Bethlehem, grant that the many military and civilian prisoners of war and recent conflicts, and all those imprisoned for political reasons, may soon return home. Do not leave us indifferent before the tragic situation of migrants, displaced persons and refugees. Their eyes beg us not to look the other way, ignoring our common humanity, but instead to make their stories our own and to be mindful of their plight.[1] Eternal Word become flesh, make us attentive to our common home, which is suffering from the carelessness with which we so often treat it. Inspire political leaders to reach effective agreements, so that future generations can live in an environment respectful of life. 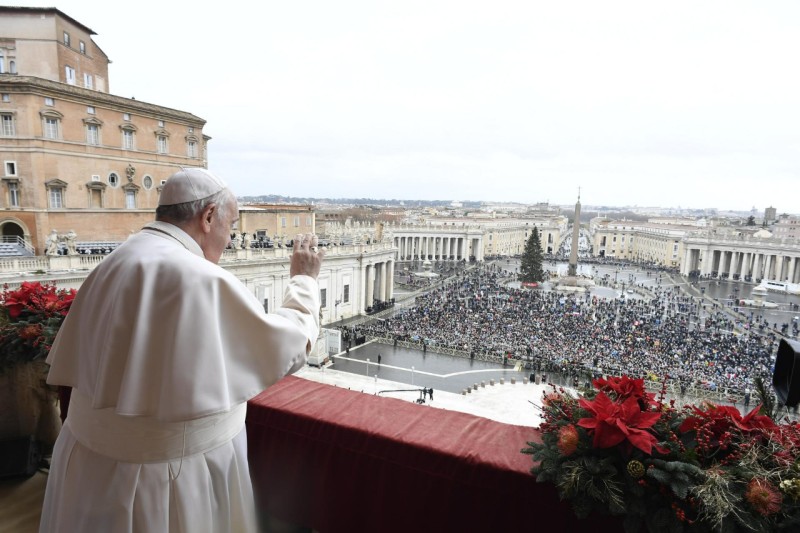 Pope Francis greets the crowd in St. Peter's Square in the Vatican on December 25, 2021. Photo courtesy of Vatican Media.
Dear brothers and sisters, amid all the many problems of our time, hope prevails, “for to us a child is born” (Is 9:6). He is the word of God, who became an infant, capable only of crying, and in need of help for everything. He wished to learn how to speak, like every other child, so that we might learn to listen to God, our Father, to listen to one another and to dialogue as brothers and sisters. O Christ, born for our sake, teach us to walk beside you on the paths of peace. Happy Christmas to all! [1] Cf. Address at the “Reception and Identification Centre”, Mytilene, 5 December 2021.   Text courtesy of Libreria Editrice Vaticana