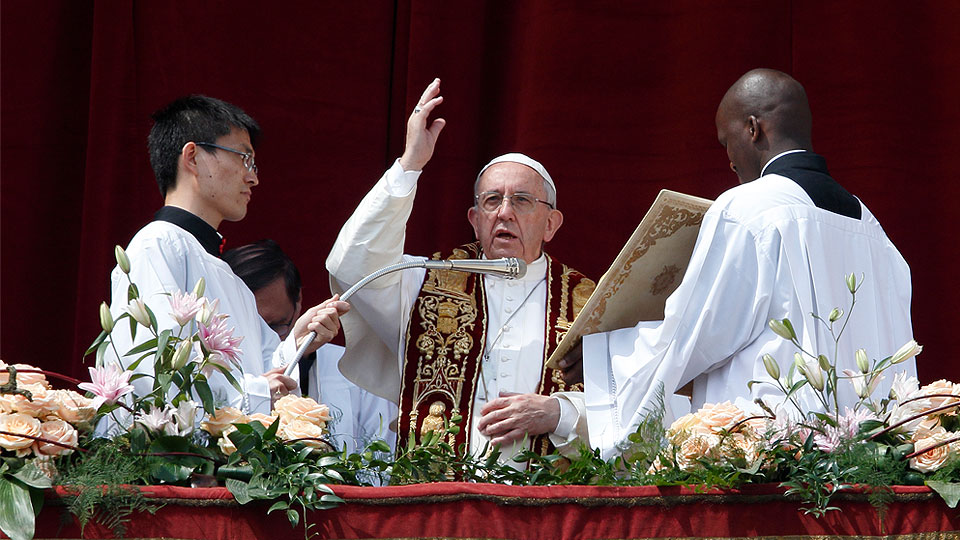 CNS photo/Paul Haring
During the Easter Sunday Mass in St. Peter’s Square, the Holy Father gave an unscripted homily. The Pope’s Easter message “Urbi et Orbi” is given to the world at the end of mass, from the central loggia of the Vatican Basilica. Here is the English language translation of the “Urbi et Orbi” message:

Dear Brothers and Sisters, Happy Easter! Today, throughout the world, the Church echoes once more the astonishing message of the first disciples: “Jesus is risen!” – “He is truly risen, as he said!” The ancient feast of Passover, the commemoration of the liberation of the Hebrew people from slavery, here finds fulfilment. By his resurrection, Jesus Christ has set us free from the slavery of sin and death, and has opened before us the way to eternal life. All of us, when we let ourselves be mastered by sin, lose the right way and end up straying like lost sheep. But God himself, our shepherd, has come in search of us. To save us, he lowered himself even to accepting death on the cross. Today we can proclaim: “The Good Shepherd has risen, who laid down his life for his sheep, and willingly died for his flock, alleluia” (Roman Missal, IV Sunday of Easter, Communion antiphon). In every age, the Risen Shepherd tirelessly seeks us, his brothers and sisters, wandering in the deserts of this world. With the marks of the passion – the wounds of his merciful love – he draws us to follow him on his way, the way of life. Today too, he places upon his shoulders so many of our brothers and sisters crushed by evil in all its varied forms. The Risen Shepherd goes in search of all those lost in the labyrinths of loneliness and marginalization. He comes to meet them through our brothers and sisters who treat them with respect and kindness, and help them to hear his voice, an unforgettable voice, a voice calling them back to friendship with God. He takes upon himself all those victimized by old and new forms of slavery, inhuman labour, illegal trafficking, exploitation and discrimination, and grave forms of addiction. He takes upon himself children and adolescents deprived of their carefree innocence and exploited, and those deeply hurt by acts of violence that take place within the walls of their own home. The Risen Shepherd walks beside all those forced to leave their homelands as a result of armed conflicts, terrorist attacks, famine and oppressive regimes. Everywhere he helps these forced migrants to encounter brothers and sisters, with whom they can share bread and hope on their journey. In the complex and often dramatic situations of today’s world, may the Risen Lord guide the steps of all those who work for justice and peace. May he grant the leaders of nations the courage they need to prevent the spread of conflicts and to put a halt to the arms trade. Especially in these days, may he sustain the efforts of all those actively engaged in bringing comfort and relief to the civil population in Syria, prey to a war that continues to sow horror and death. May he grant peace to the entire Middle East, beginning with the Holy Land, as well as in Iraq and Yemen. May the Good Shepherd remain close to the people of South Sudan, Sudan, Somalia and the Democratic Republic of Congo, who endure continuing hostilities, aggravated by the grave famine affecting certain parts of Africa. May the Risen Jesus sustain the efforts of all those who, especially in Latin America, are committed to ensuring the common good of societies marked at times by political and social tensions that in some cases have resulted in violence. May it be possible for bridges of dialogue to be built, by continuing to fight the scourge of corruption and to seek viable and peaceful solutions to disputes, for progress and the strengthening of democratic institutions in complete respect for the rule of law. May the Good Shepherd come to the aid of Ukraine, still beset by conflict and bloodshed, to regain social harmony. May he accompany every effort to alleviate the tragic sufferings of those affected by the conflict.