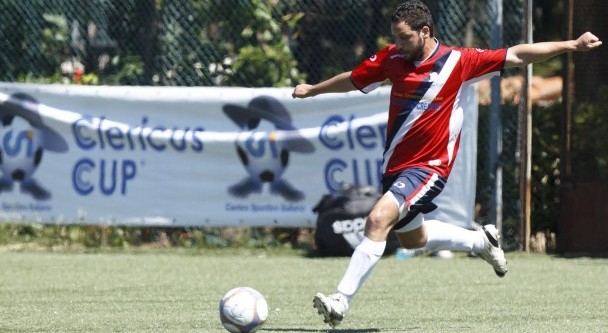 Pope Francis has been a surprise in many ways. Alot of things he does are things we are not use to seeing in a pope. One of the things that makes this pope different from other popes: he is a Soccer fan.  He is even a card carrying member of the athletic association where he used to play basketball as a teenager.  The same association is home to his favourite soccer team.
The team is San Lorenzo Almagro, but the roots of this team are Catholic! It all goes back to a Salesian priest, Fr. Lorenzo Massa who decided to open the doors of the oratory of Saint Anthony in order to take the young neighbourhood soccer enthusiasts off the streets and hopefully prevent them from picking up habits like alcohol and drugs.
On 1 April 1908, an assembly was held in the Almagro district of Buenos Aires with the purpose of establishing an athletic club. During the meeting, several names were proposed. The first option was "Los Forzozos de Almagro" (the name used by the boys to name their street football squad, which means "the powerful") which did not sit well with Fr. Massa (who was present at the assembly). The other proposal was to name the club"San Lorenzo", in homage to Fr. Massa. However, he refused to be honored that way. The name was finally accepted by the priest, but only after he announced that the name would honor St. Lawrence of Rome ("San Lorenzo" in Spanish) and the Battle of San Lorenzo, one of the most important battles in the fight for the independence of Argentina. Another founding member, Federico Monti, suggested adding the name of the neighborhood, Almagro, where most of the members lived in. This was accepted by the assembly.
Even the colours of the club have Catholic origins. The team wears blue and scarlet striped jerseys. The colours  come from the Salesian devotion to Our lady help of the Christians.
Pope Francis, or at that time the young Jorge Bergoglio, played basketball with the club. However, his connection to the club started when as just a little kid.  He would go with his father to watch the team play in the Viejo Gasometro, the team's first stadium.
Pope Francis has had a membership card with the club since his days playing basketball.  When he was elected pope the club published a photo of his membership card on their official web page. Another visible reminder of his connection to the team was a giant team flag waving above the crowd  at his installation mass.
---
(CNS Photo / Paul Haring)