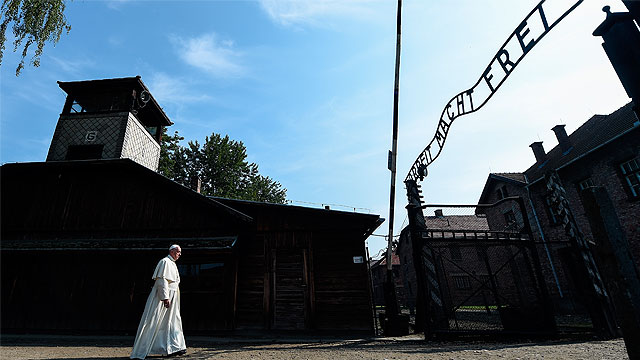 In the weeks leading up to World Youth Day Krakow, I came up with the idea of doing a series of “WYD Memories” for our network, interviewing members of our team who attended past WYDs. Here at S+L we have many great personal memories of the WYDs since Rome in 2000 and we thought it would be a great idea to relive some of them with our viewers!

Memory is an important element of the World Youth Days. So much happens at every World Youth Day that it can be overwhelming, and sometimes we forget significant moments or events. But there are also those moments that we’ll “never forget” for this or that reason, and they can even accrue greater meaning through life. When Pope Francis returned to Rome from Krakow he reflected on his visit. On August 3 he held his regular weekly audience, and then wrote a letter of appreciation to the Polish bishops. At the audience and in the letter Francis mentioned one particular experience that he will never forget: his visit to Auschwitz-Birkenau on Friday, July 29. “The moment of prayer in the concentration camp at Auschwitz is especially dear to me,” he told the bishops. The visit to the notorious death camp took place in complete silence, by request of Pope Francis. In his own words at the general audience, “The great silence of the visit to Auschwitz-Birkenau was more eloquent than any word spoken could have been.” Later that day (July 29), Francis participated in the Way of the Cross, a staple of the World Youth Day triduum, which takes believers through fourteen scriptural events of Jesus’ passion and death. The theme of WYD Krakow was “Blessed are the merciful, for they shall receive mercy.” (Matt 5:7) Bishop Grzegorz Rys, the author of the reflections for the stations and an auxiliary bishop of Krakow, connected each station with one of the corporal and spiritual works of mercy. As the hundreds of thousands of pilgrims in Blonia Park—and the millions more watching on TV around the world—prayed the stations, Jesus’ experience was relived through the trials and weakness of people today: the unwelcome experienced by countless refugees, the lack of solidarity that perpetuates world hunger, our quickness to judge, our inability to forgive, our collective indifference to human suffering. Many people who prayed the Way of the Cross that evening were touched by the relevancy and potency of the reflections. Like all good pastoral preaching and teaching, the reflections brought the gospel message into dialogue with the contemporary reality. The experience at Auschwitz combined with the powerful Way of the Cross moved Pope Francis deeply. Late on Friday evening Francis appeared at the window of the archbishop’s residence and spoke about the day:

This morning… I went to Auschwitz, to Birkenau, to remember the suffering of seventy years ago… Such pain, such cruelty!  Is it possible that we men, created in the image and likeness of God, are capable of such things? These things were done. I don’t want to make you sad, but I must speak the truth. Cruelty did not end at Auschwitz, at Birkenau: today too, people are tortured; many prisoners are tortured at once, to make them speak… It is terrible! Today there are men and women in overcrowded prisons; they live – I’m sorry – like animals. Today there is this cruelty. We say: yes, we saw the cruelty of seventy years ago, how people were put to death by being shot, or hanged, or with gas. But today in many places in the world, where there is war, the same thing is happening.

In his general audience on August 3, Francis reiterated these sentiments:

“In that great silence [at Auschwitz], I prayed for all the victims of violence and war: and there, in that place, I realized more than ever how precious is memory; not only as a record of past events, but as a warning, and a responsibility for today and tomorrow, that the seed of hatred and violence not be allowed to take root in the furrows of history.”

When I look back at WYD Krakow, the most memorable thing to me was witnessing the most memorable thing to Pope Francis: realizing the value of memory. At WYD, we realized that we are living through a time of profoundly unjust and unnecessary human suffering, when the lessons of history and our faith tradition should be enough to make us better; that we are human beings with great potential but incapable of living up to it on our own. In this sense we can better understand Francis’ desire for silence in Auschwitz. In the face of the memory of that unthinkable suffering, and the continuation of it today to various degrees, what can be said? It is the great unanswerable, as Francis said from the window of the archbishop’s residence in response to the question, why do children suffer? “It is a mystery. There are no answers to these questions.” WYD Krakow was a witness to the world that the Church knows what is happening in it. The Church is aware of the suffering of people, and feels very uneasy about it. The most honest response we can give to this suffering is to bow our heads in respectful silence, and live concrete acts of mercy. That, at least, is the path Francis has chosen. Photo: CNS