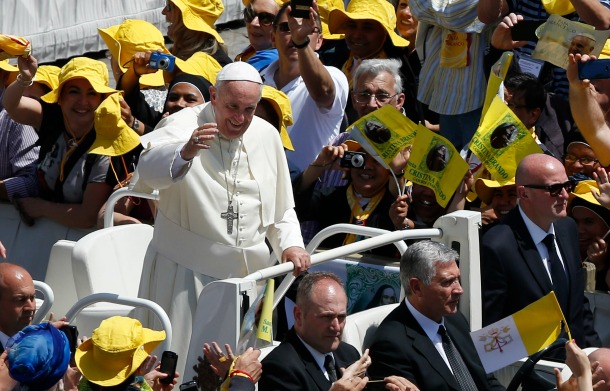 Pope Francis appealed on Sunday (May 17th) for an end to the violence in Burundi and urged its people to act responsibly for the good of the nation. Burundi saw an attempted coup earlier this week and has been the scene of violent clashes between supporters and opponents of the president. The Pope's appeal for peace in Burundi came during his address just before the recitation of the traditional Easter Marian prayer, the Regina Coeli. Below, please find Vatican Radio’s translation of Pope Francis' remarks ahead of the Regina Coeli:

Dear brothers and sisters,
At the end of this celebration, I want to greet all of you who have come to pay homage to the new Saints, in a particular way the official Delegations from Palestine, France, Italy, Israel, and Jordan. I greet with affection the Cardinals, Bishops, priests, as well as the spiritual daughters of the four Saints. Through their intercession, may the Lord grant a new missionary impulse to their respective countries. Inspired by their example of mercy, charity, and reconciliation, may the Christians of these lands look to the future with hope, continuing in the journey of solidarity and fraternal coexistence.
I extend my greetings to the families, the parish groups, the associations, and the schools present, especially to those being confirmed from the Archdiocese of Genoa. I address a special though to the faithful of the Czech Republic, gathered in the sanctuary of Svatý Kope?ek, near Olomouc, who today are remembering the twentieth anniversary of the visit of Saint John Paul II.
Yesterday, in Venice was the beatification of the priest Luigi Caburlotto, pastor, educator, and founder of the Daughters of Saint Joseph. Let us give thanks to God for this exemplary pastor, who led an intense spiritual and apostolic life, totally dedicated to the good of souls.
I wish to invite all you to pray for the beloved people of Burundi which is living through a delicate moment: May the Lord help all people to flee the violence and to act responsibly for the good of the nation. With filial love let us turn now to the Virgin Mary, Mother of the Church, Queen of the Saints, and model of all Christians:
Regina coeli...