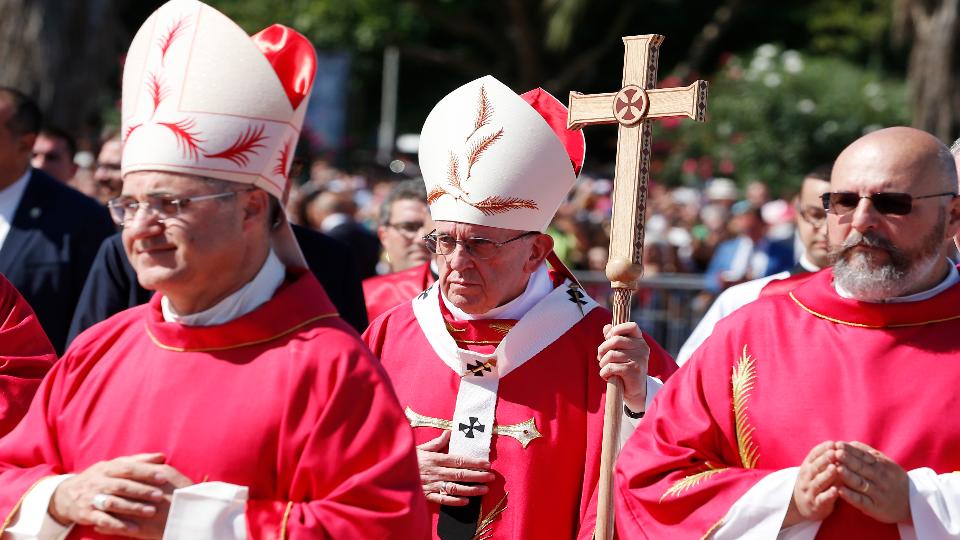 CNS Photo/Paul Haring
Pope Francis to Palermo clergy and religious: “Life speaks louder than words”  Pope Francis addresses the clergy, seminarians, and men and women religious of the Italian city of Palermo, and takes the example of Blessed Father Pino Puglisi to highlight the importance of living the Gospel in daily life. By Francesca Merlo In his prepared remarks, Pope Francis commemorated three fundamental aspects of Father Pino Puglisi’s priesthood, in this way, he explained the importance of bringing to life what is preached using “three simple verbs”. Celebration The first verb is “to celebrate”, began Pope Francis. “Take and eat: this is my Body given up for you”. He explained that these words of Jesus, recited today like any other day, “must not remain on the altar.” "They must be carried into life” because they remind us that the priest is a man who offers his whole life for others. “Ours, dear priests, is not a career, but a gift of self; it is not a job, but a mission. Each day, with no holidays, with no rest”. “This”, said Pope Francis, “is how Father Pino lived”. ‘Priestly workout’ 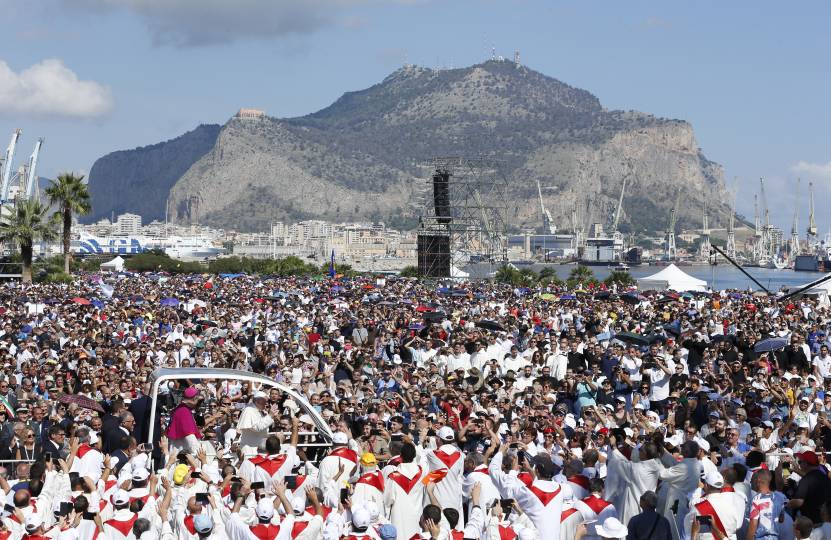 He said priests share with the world the peace Jesus gives. The Pope said priests bring “understanding where there is discord, harmony where there is dispute and serenity where there is hostility”. The priest is also called to “bring to life” the words: “I absolve you from all your sins”, making him a “man of forgiveness”. “The gym in which the priest trains to become a man of forgiveness is the seminary... For the consecrated religious it is in the community”, said Pope Francis. “It is there”, he said, that the “desire to unite needs to be cultivated.” “Think of Father Pino”, said Pope Francis, “who always made himself available to everyone and waited for all with an open heart - even the delinquent.”
Accompaniment
The second verb is “to accompany”. Pope Francis said accompanying “is the keystone to being a priest today”. He remembered that Father Pino “spoke to young people more than speaking ofyoung people.”. “Drawing out of them the truest questions, and the most beautiful answers.” This, Pope Francis said is a mission that “stems from patience, listening, and from having the heart of a father”.
Mother Church
Pope Francis briefly addressed women religious. He told them that their mission is an important one, because “the Church is a Mother, and her way of accompanying must always have a maternal trace to it”. So Pope Francis invited women religious to “reveal the Church’s maternal face.” Witnessing 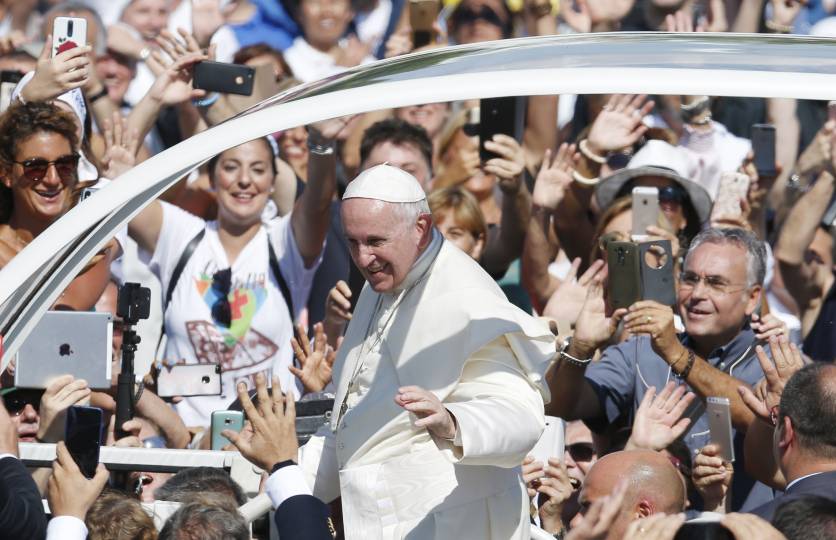 Pope Francis said the final verb is “to bear witness”, which, he said, “concerns us all”. He said that in Pino Puglisi’s home, a “genuine simplicity stands out”. The Pope explained that Father Pino’s simple life is “the eloquent sign of a life consecrated to the Lord, one that seeks neither consolation nor glory from the world”. He said that “Life speaks louder than words” and that we “serve in simplicity”. Finally, Pope Francis invited the men and women religious, seminarians and clergy of Palermo to “bear witness to hope”. “The person who witnesses to hope does not indicate what hope is”, the Pope said, “but who hope is. Christ is hope”. Pope Francis urges Sicilian youth not give up hope for a better future The last public event of Pope Francis’ day-long visit to the Italian island of Sicily was a meeting with young people in Palermo. The youth asked the Pope some questions to which the Pope responded. By Robin Gomes To the first question on how to listen to the voice of the Lord, the Pope’s response was in 4 verbs: walk, search, dream and serve.
Listening to God
The Pope said one listens to and discovers God while walking and not seated in an armchair, because sitting, he said, creates interference with the Word of God, which is dynamic. “God hates laziness and loves action,” the Pope said and pointed to examples from the Bible such as the disciples of Emmaus, David and Samuel, who were on the move. “But,” the Pope said, “it is not about moving to keep fit, but about moving the heart. The Lord speaks to those in search. The Pope said that one does not search for the Lord on the mobile phone, the television, the deafening music, going high on drugs or alone in front of the mirror of your closed room. Saying that God speaks in relationships, the Pope urged the young people not to close themselves in, but seek Him going out as He awaits them there, at the door of their hearts. He asked them to share their experiences and live the Church by making friends, meeting others, walking together.
Dreaming
Pope Francis urged the young people also to never stop dreaming, and dreaming big, without being afraid of cutting a poor figure. Cutting a poor figure is not the biggest drama of life. The biggest drama of life, he said, is not facing life and not giving life. It’s better to ride beautiful dreams with a few bruises than to retire into a quiet life. Better a good idealist than a lazy realist. Better a Don Quixote than a Sancho Panza! The Pope urged the young people not to extinguish their dreams, saying having great dreams dilates the heart and allows the Lord to enter. After walking, searching and dreaming, the Pope said, comes serving, which helps one to tune in to the Lord’s frequency. Serving and volunteering, he pointed out, gives spice to life, and helps us feel alive. Welcome and human dignity Talking about Sicily as a land of welcome and encounter, the Pope said faith is based on encounter, because God did not leave man alone, but came down to meet us. God wanted that we be together as a people not alone and selfish, and man’s dignity, welcome and solidarity are distinctive Christian traits. Pope Francis spoke about getting involved and spending oneself for others, of dirtying ones hands for others. As a great Italian author wrote, “Life is not explained, it is lived," the Pope said, it applies more to Christian life of putting one’s talents and time for others.
Building the future
The Pope told the young Sicilians that they are the builders of the future which is in their hands, and they should build with their hands, their hearts, their passion, their love and their dreams together with others. The Pope said Sicily needs genuine men and women who denounce malpractice and exploitation, who live free and liberating relationships, who love the weakest and are passionate about legality, mirroring inner honesty.