Build a world where enemies recognize themselves as brothers 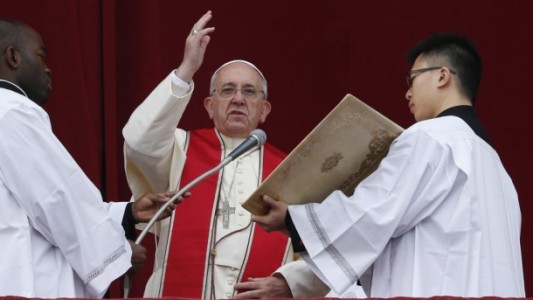 Pope Francis offered New Year’s greetings of peace Wednesday to the tens of thousands of pilgrims gathered in St. Peter’s Square to recite with the Holy Father the Angelus prayer at the start of 2014.
The Pope said his wishes for the new year are “those of the Church:” Christian wishes that put Jesus Christ at the center of history and at its end: “the Kingdom of God, Kingdom of peace, justice, liberty in love.” And the Holy Spirit, the Holy Father said, is the force which propels us towards that end.
Recalling that on January first, the Church celebrates the feast of Mary, the Holy Mother of God as well as World Day of Peace, Pope Francis referred to his Message of Peace for the Day: ‘Fraternity: the Foundation and Pathway to Peace’ saying it stems from the conviction that we are “all children of one God and are part of the same human family,” sharing a common destiny.
We all have a responsibility, the Pope stressed, to build a world which “becomes a community of brothers who respect each other, accept each other’s differences, and take care of each other.”
We are also called to acknowledge “the violence and injustices present in many places around the world” and we cannot allow ourselves to be “indifferent and immobile,” the Pope said. Everyone must work to build a society of solidarity and “truly more just.”
Here, Pope Francis departed from his prepared remarks to say he was moved by a letter he recently received from a man touched by personal tragedy and who asked him why so many terrible things are happening in today’s world: ‘What has happened to the hearts of men?’ the man wrote. The Pope repeated the question, asking the faithful: “what has happened in the hearts of men, in the heart of humanity? It is time to stop!! It is time to stop!”
Today, believers around the world pray to the Lord for the gift of peace and the ability to spread it everywhere the Pope said. May the Lord lead us down the path of justice and peace “more decisively,” the Pope prayed, invoking the Holy Spirit to “loosen” the fastenings and hardening of hearts so that they will open up to “the tenderness and weakness of the Child Jesus.” “Peace,” he said, “requires the force of meekness, the force of nonviolence of truth and of love.”
To “Mary, Mother of the Redeemer,” Pope Francis entrusted the “cries for peace of populations oppressed by war and violence so that the courage of dialogue and reconciliation prevails over temptations of revenge, of arrogance (it: prepotenza), of corruption.” Pope Francis prayed that “the Gospel of fraternity announced and witnessed by the Church will speak to every conscience and break down the walls that prevent enemies from recognizing each other as brothers.”
Post Angelus
Following the Angelus, Pope Francis thanked Italian President Giorgio Napoletano for his good wishes expressed in a televised address on New Year’s Eve, and invoked a blessing on the Italian people so that with the “responsible” and fraternal “contribution of everyone, they may look to the future with trust and hope.”
The Pope concluded his remarks by welcoming the many initiatives taken up around the globe for the World Day of Peace.