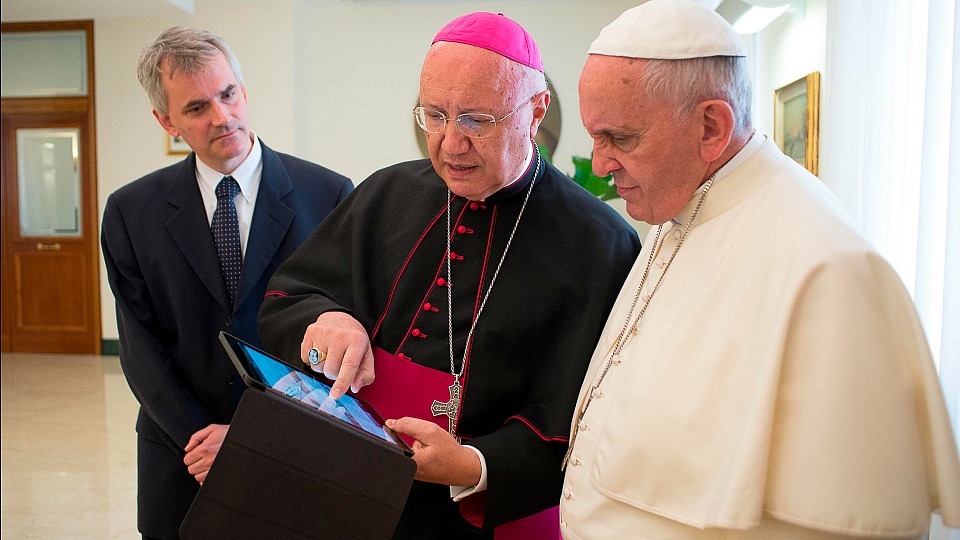 Below is Pope Francis’ Message for the 53rd World Day of Social Communications, which will be celebrated this year on Sunday, June 2, 2019. The Vatican releases this message each year on January 24, the Memorial of St. Francis de Sales, patron saint of journalists.

«We are members one of another» (Eph 4:25). From social network communities to the human community

Dear Brothers and Sisters, Ever since the internet first became available, the Church has always sought to promote its use in the service of the encounter between persons, and of solidarity among all. With this Message, I would like to invite you once again to reflect on the foundation and importance of our being-in-relation and to rediscover, in the vast array of challenges of the current communications context, the desire of the human person who does not want to be left isolated and alone.

The metaphors of the net and community

Today’s media environment is so pervasive as to be indistinguishable from the sphere of everyday life. The Net is a resource of our time. It is a source of knowledge and relationships that were once unthinkable. However, in terms of the profound transformations technology has brought to bear on the process of production, distribution and use of content, many experts also highlight the risks that threaten the search for, and sharing of, authentic information on a global scale. If the Internet represents an extraordinary possibility of access to knowledge, it is also true that it has proven to be one of the areas most exposed to disinformation and to the conscious and targeted distortion of facts and interpersonal relationships, which are often used to discredit. We need to recognize how social networks, on the one hand, help us to better connect, rediscover, and assist one another, but on the other, lend themselves to the manipulation of personal data, aimed at obtaining political or economic advantages, without due respect for the person and his or her rights. Statistics show that among young people one in four is involved in episodes of cyberbullying. [1] In this complex scenario, it may be useful to reflect again on the metaphor of the net, which was the basis of the Internet to begin with, to rediscover its positive potential. The image of the net invites us to reflect on the multiplicity of lines and intersections that ensure its stability in the absence of a centre, a hierarchical structure, a form of vertical organization. The net works because all its elements share responsibility. From an anthropological point of view, the metaphor of the net recalls another meaningful image: the community. A community is that much stronger if it is cohesive and supportive, if it is animated by feelings of trust, and pursues common objectives. The community as a network of solidarity requires mutual listening and dialogue, based on the responsible use of language. Everyone can see how, in the present scenario, social network communities are not automatically synonymous with community. In the best cases, these virtual communities are able to demonstrate cohesion and solidarity, but often they remain simply groups of individuals who recognize one another through common interests or concerns characterized by weak bonds. Moreover, in the social web identity is too often based on opposition to the other, the person outside the group: we define ourselves starting with what divides us rather than with what unites us, giving rise to suspicion and to the venting of every kind of prejudice (ethnic, sexual, religious and other). This tendency encourages groups that exclude diversity, that even in the digital environment nourish unbridled individualism which sometimes ends up fomenting spirals of hatred. In this way, what ought to be a window on the world becomes a showcase for exhibiting personal narcissism. The Net is an opportunity to promote encounter with others, but it can also increase our self-isolation, like a web that can entrap us. Young people are the ones most exposed to the illusion that the social web can completely satisfy them on a relational level. There is the dangerous phenomenon of young people becoming “social hermits” who risk alienating themselves completely from society. This dramatic situation reveals a serious rupture in the relational fabric of society, one we cannot ignore. This multiform and dangerous reality raises various questions of an ethical, social, juridical, political and economic nature, and challenges the Church as well. While governments seek legal ways to regulate the web and to protect the original vision of a free, open and secure network, we all have the possibility and the responsibility to promote its positive use. Clearly, it is not enough to multiply connections in order to increase mutual understanding. How, then, can we find our true communitarian identity, aware of the responsibility we have towards one another in the online network as well?

“We are members one of another”

A possible answer can be drawn from a third metaphor: that of the body and the members, which Saint Paul uses to describe the reciprocal relationship among people, based on the organism that unites them. “Therefore, putting away falsehood, speak the truth, each to his neighbour, for we are members one of another” (Eph 4:25). Being members one of another is the profound motivation with which the Apostle invites us to put away falsehood and speak the truth: the duty to guard the truth springs from the need not to belie the mutual relationship of communion. Truth is revealed in communion. Lies, on the other hand, are a selfish refusal to recognize that we are members of one body; they are a refusal to give ourselves to others, thus losing the only way to find ourselves. The metaphor of the body and the members leads us to reflect on our identity, which is based on communion and on “otherness”. As Christians, we all recognize ourselves as members of the one body whose head is Christ. This helps us not to see people as potential competitors, but to consider even our enemies as persons. We no longer need an adversary in order to define ourselves, because the all-encompassing gaze we learn from Christ leads us to discover otherness in a new way, as an integral part and condition of relationship and closeness. Such a capacity for understanding and communication among human persons is based on the communion of love among the divine Persons. God is not Solitude, but Communion; he is Love, and therefore communication, because love always communicates; indeed, it communicates itself in order to encounter the other. In order to communicate with us and to communicate himself to us, God adapts himself to our language, establishing a real dialogue with humanity throughout history (cf. Second Vatican Ecumenical Council, Dogmatic Constitution Dei Verbum, 2). By virtue of our being created in the image and likeness of God who is communion and communication-of-Self, we carry forever in our hearts the longing for living in communion, for belonging to a community. “Nothing, in fact, is as specific to our nature as entering into a relationship one with another, having need of one another,” says Saint Basil.[2] The present context calls on all of us to invest in relationships, and to affirm the interpersonal nature of our humanity, including in and through the network. All the more so, we Christians are called to manifest that communion which marks our identity as believers. Faith itself, in fact, is a relationship, an encounter; and under the impetus of God’s love, we can communicate, welcome and understand the gift of the other and respond to it. Communion in the image of the Trinity is precisely what distinguishes the person from the individual. From faith in God who is Trinity, it follows that in order to be myself I need others. I am truly human, truly personal, only if I relate to others. In fact, the word “person” signifies the human being as a “face”, whose face is turned towards the other, who is engaged with others. Our life becomes more human insofar as its nature becomes less individual and more personal; we see this authentic path of becoming more human in one who moves from being an individual who perceives the other as a rival, to a person who recognizes others as travelling companions.

The image of the body and the members reminds us that the use of the social web is complementary to an encounter in the flesh that comes alive through the body, heart, eyes, gaze, breath of the other. If the Net is used as an extension or expectation of such an encounter, then the network concept is not betrayed and remains a resource for communion. If a family uses the Net to be more connected, to then meet at table and look into each other’s eyes, then it is a resource. If a Church community coordinates its activity through the network, and then celebrates the Eucharist together, then it is a resource. If the Net becomes an opportunity to share stories and experiences of beauty or suffering that are physically distant from us, in order to pray together and together seek out the good to rediscover what unites us, then it is a resource. We can, in this way, move from diagnosis to treatment: opening the way for dialogue, for encounter, for “smiles” and expressions of tenderness... This is the network we want, a network created not to entrap, but to liberate, to protect a communion of people who are free. The Church herself is a network woven together by Eucharistic communion, where unity is based not on “likes”, but on the truth, on the “Amen”, by which each one clings to the Body of Christ, and welcomes others.

From the Vatican, January 24, 2019 The Memorial of Saint Francis de Sales