"Pope Francis is great, but what do you really think?" 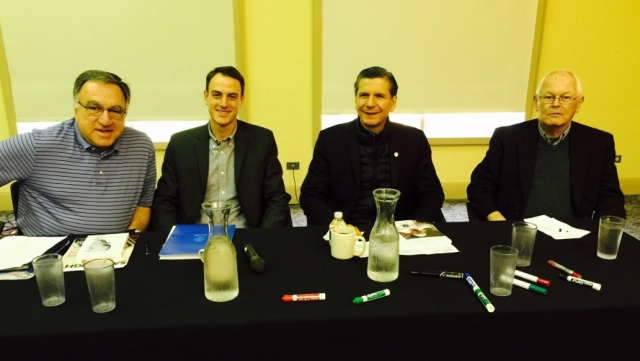 Photo: Three of the four participants on the closing panel of the 2015 De Mazenod Conference were Canadians.  From left to right: Fr. Thomas Rosica, Sebastian Gomes, Archbishop Gustavo García-Siller and Fr. Ronald Rolheiser discuss the Francis effect on the Catholic Church. (S+L: Feb. 1, 2015) This past weekend I had the privilege of addressing the 2015 De Mazenod Conference, held at the Oblate Renewal Center, on the campus of the Oblate School of Theology in San Antonio, Texas.  It was a stimulating and spirit-filled event that brought members of the Missionary Oblate Partnership together from across the country to discuss Pope Francis and his visionary exhortation The Joy of the Gospel. We began the conference with a screening of S+L’s documentary The Francis Effect, in which an entire chapter is dedicated to what we called “the blueprint,” that is, Francis’ apostolic exhortation.  The film received a very positive response from the group and it set the tone for our further reflections on Francis. Over the course of the weekend a number of themes came up: Francis’ vision of the Church as a field hospital after battle; his impact on the recent Synod of Bishops on the family; questions about authentic joy and the value of doubts, as well as specific issues like the role of women in the Church and engagement with younger generations. By the end of the weekend we still had many unanswered questions, of course.  And one in particular struck me and is worth further reflection.  It is the question of why most Catholics seem to respond positively to Pope Francis and why a smaller, though significant number is sincerely critical of some of the things he says and does. The general response of the conference participants to the Pope was overwhelmingly positive.  It should be pointed out, too, that the conference was in no way made up of individuals who share one particular ideological position.  And so it was interesting to watch the particular discussions develop and almost inevitably turn to the question I just posed. 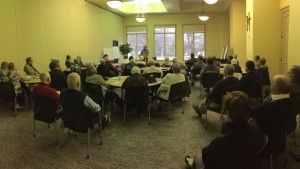 The Archbishop of San Antonio is Gustavo García-Siller, who celebrated Mass with us and joined our panel discussion on the final day of the conference.  In his homily he took an earnest stand in defense of church unity—not unity among the Christian traditions, but specifically unity among Roman Catholics.  In his mind, the conversation about Pope Francis that is taking place everywhere in the Church these days cannot ignore the ensuing reactions that seem to expose a chasm between those who believe the Pope is doing exactly what we need today and those who—to put it delicately—do not. We Catholics have a long and tumultuous history, where individuals have been excommunicated and even executed for their disobedience to the popes and their challenges to the Church’s teachings.  We do, after all, boldly claim a consistent belief through the epochs of history back to the Apostles who were the closest confidantes of Jesus.  No one should expect the historical journey of our community to be without some major scandals. Yet we claim a consistent belief and a body of teachings.  And all of that weight of the apostolic tradition bears down on the shoulders of sincere believers and everyone feels the pressure of it when the topic of Pope Francis arises.  It matters little whether you are happy about his ministry or not, his two years in office have put the question of fidelity to our two-thousand-year-old tradition on the table. But why?  There are a number of specific cases that we can look at to see the effects of this.  Notably among them was the Pope’s famous, “Who am I to judge?” comment on the plane back from Rio de Janeiro in 2013, and more recently his desire for an open and honest discussion of Catholic family life at the Synod of Bishops that, according to some, caused confusion and threatened what is believed to be unchangeable Church teaching on marriage. Generally speaking, the divergent reactions among Catholics to these kinds of comments and gestures by the Pope hinge on a fixed understanding of the nature of the Church, and more specifically on the nature of reform in the Church.  Pope Francis is a reforming pope; there is no doubt about it.  For those who fear reform, therefore, the freewheeling pontificate of Francis must be challenging, if not unbearable.  Resistance should be expected. There was an insightful book written in the late 90's called, The Reform of the Papacy by the former Archbishop of San Francisco John Quinn.  Quinn traces the attitude of resistance to reform back to the Reformation of the 16th century.  The Protestant Reformers, he says, “used the word “reform” to include rejection of the papacy, rejection of the priesthood, the Mass, the intercession of Our Lady and the saints, monastic and religious life, and other things.” No wonder, he continues, that after the Reformation, “discomfort with use of the word “reform” and grim resistance to criticism developed within the Catholic Church.” In his reflection on the beginnings of the Reformation, Chesterton noted that prior to it the differences of opinion between Catholics were always a matter of emphasis.  Some stressed “the idea of the impotence of man before God, the omniscience of God about the destiny of man, the need for holy fear and the humiliation of intellectual pride [which Chesterton associates with the thought of St. Augustine], more than the opposite and corresponding truths of free will or human dignity or good works [St. Thomas Aquinas].”  But, he continues, “a time was coming when emphasizing the one side was to mean flatly contradicting the other.”  He was referring, of course, to the official schism between the Protestant Reformers and the Catholic Church in the 16th century. If we jump forward 500 years to the recent Synod of Bishops, for example, we find modern topics of dispute around the Church’s teaching on marriage and family life.  Unlike the Reformation period, today it is the Pope himself who is responsible for opening and encouraging the discussion.  It is the same with other comments he makes; the reactions, both positive (hopeful) and negative (fearful), are related to the degree to which one believes a particular change will come about. Ironically, the source of fear among Catholics who want no change in doctrine is simultaneously the source of frustration among Catholics who hope for it.  The truth is that Pope Francis has neither obliged the latter group, nor conceded to the former.  In other words, he hasn’t changed a single doctrine or teaching of the Catholic Church.  Perspective is of the essence today.  If you read the Pope’s final address to the Synod of Bishops last October, you will see clearly that he does not believe in a Church where emphasizing the one side means flatly contradicting the other. Perhaps there is something to be said about our differences of opinions in terms of emphasis.  Yes, the Pope is emphasizing mercy and forgiveness before the rules and regulations.  Yes, he is emphasizing mission and evangelization before catechesis.  Yes, he is emphasizing the Church's pastoral outreach above concern for its own institutional security.  But he is not, in any way, rejecting, dismissing or contradicting those teachings of the Church that are essential to the Christian Faith. More than anything else, the memory of the Reformation should provoke Catholics to a deeper and humbler dialogue with each other, and an awareness of the beauty and fragility of our communion.  The words of Vatican II still ring true:

It happens rather frequently, and legitimately so, that with equal sincerity some of the faithful will disagree with others on a given matter. Even against the intentions of their proponents, however, solutions proposed on one side or another may be easily confused by many people with the Gospel message. Hence it is necessary for people to remember that no one is allowed in the aforementioned situations to appropriate the Church's authority for his opinion. (Gaudium et Spes, 43)