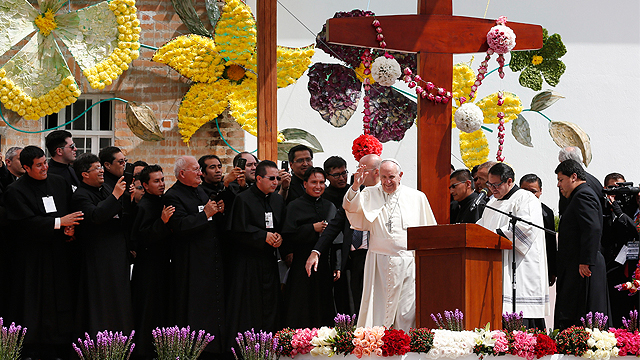 On Wednesday morning, July 8, 2015, Pope Francis arrived at the Sanctuary of "El Quinche" for the meeting with the clergy, men and women religious and seminarians. Upon arrival, the Holy Father was welcomed by the Rector of the Shrine at the main entrance of the church, which was full of priests and religious elders. The Holy Father then walk the "Campo Mariano" where a copy of the statue of the Virgen de El Quinche is exposed. The meeting then opened with the welcome address of Mons. Celmo Lazzari, CSI, Apostolic Vicar of San Miguel de Sucumbíos and Head of the Episcopal Conference of Ecuador for Consecrated Life, and the delivery of gifts to the Pope. A priest and a nun presented their testimony and, finally, after praying to the "Virgen del Quinche", the Holy Father addressed the congregation off the cuff, setting aside his prepared text. Below you will find the full text of his impromptu speech: