Pope Francis' homily for the Solemnity of SS. Peter and Paul 2021 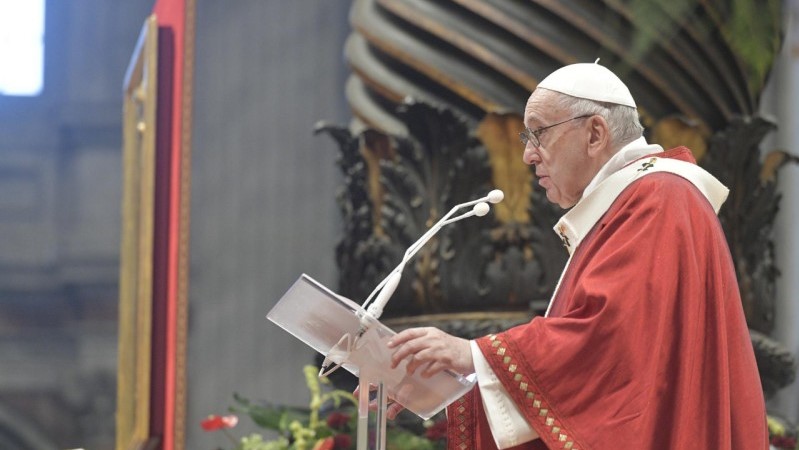 Pope Francis celebrates Mass for the Solemnity of Saints Peter and Paul in St. Peter's Basilica on June 29, 2021. Photo courtesy of Vatican Media.

Every year on June 29, the Church observes the Solemnity of Saints Peter and Paul. Traditionally on this day, the pope blesses the pallia– the archbishop's symbol of office – for all the metropolitan archbishops newly created during the previous year. It has also become a traditional day, along with the feast of St. Andrew in November, for the exchange of delegations between the pope and the Patriarch of Constantinople. Today, Pope Francis celebrated Mass in St. Peter's Basilica in the Vatican in the presence of bishops, cardinals, and members of the lay faithful, as well as a delegation led by Metropolitan Emmanuel of Chalcedon. Read the full text of his homily below:

Holy Mass and Blessing of the Sacred Pallium for the New Metropolitan Archbishops on the Solemnity of Saints Peter and Paul, Apostles Tuesday, 29 June 2021

Two great Apostles of the Gospel and two pillars of the Church: Peter and Paul.  Today we celebrate their memory. Let us take a closer look at these two witnesses of faith. At the heart of their story is not their own gifts and abilities; at the centre is the encounter with Christ that changed their lives. They experienced a love that healed them and set them free. They then became apostles and ministers of freedom for others. Peter and Paul were free because they were set free. Let us reflect on this central point. Peter, the fisherman from Galilee, was set free above all from his sense of inadequacy and his bitter experience of failure, thanks to the unconditional love of Jesus. Although a skilled fisher, many times, in the heart of the night, he tasted the bitterness of frustration at having caught nothing (cf. Lk 5:5; Jn 21:5) and, seeing his empty nets, was tempted to pull up his oars. Though strong and impetuous, Peter often yielded to fear (cf. Mt 14:30). Albeit a fervent disciple of the Lord, he continued to think by worldly standards, and thus failed to understand and accept the meaning of Christ’s cross (cf. Mt 16:22). Even after saying that he was ready to give his life for Jesus, the mere suspicion that he was one of Christ’s disciples led him in fright to deny the Master (cf. Mk 14:66-72). Jesus nonetheless loved Peter and was willing to take a risk on him. He encouraged Peter not to give up, to lower his nets once more, to walk on water, to find the strength to accept his own frailty, to follow him on the way of the cross, to give his life for his brothers and sisters, to shepherd his flock. In this way, Jesus set Peter free from fear, from calculations based solely on worldly concerns. He gave him the courage to risk everything and the joy of becoming a fisher of men. It was Peter whom Jesus called to strengthen his brothers in faith (cf. Lk 22:32). He gave him – as we heard in the Gospel – the keys to open the doors leading to an encounter with the Lord and the power to bind and loose: to bind his brothers and sisters to Christ and to loosen the knots and chains in their lives (cf. Mt 16:19). All that was possible only because – as we heard in the first reading – Peter himself had been set free. The chains that held him prisoner were shattered and, as on the night when the Israelites were set free from bondage in Egypt, he was told to arise in haste, fasten his belt and put on his sandals in order to go forth. The Lord then opened the doors before him (cf. Acts 12:7-10). Here we see a new history of opening, liberation, broken chains, exodus from the house of bondage. Peter had a Passover experience: the Lord set him free. 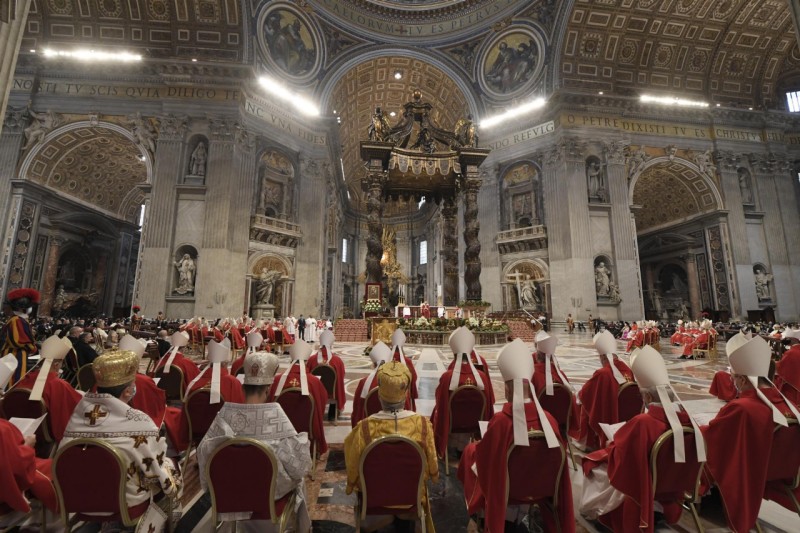 Pope Francis celebrates Mass for the Solemnity of Saints Peter and Paul in St. Peter's Basilica on June 29, 2021. Photo courtesy of Vatican Media.
The Apostle Paul also experienced the freedom brought by Christ. He was set free from the most oppressive form of slavery, which is slavery to self. From Saul, the name of the first king of Israel, he became Paul, which means “small”. He was also set free from the religious fervour that had made him a zealous defender of his ancestral traditions (cf. Gal 1:14) and a cruel persecutor of Christians. Set free. Formal religious observance and the intransigent defence of tradition, rather than making him open to the love of God and of his brothers and sisters, had hardened him: he was a fundamentalist. God set him free from this, yet he did not spare him the frailties and hardships that rendered his mission of evangelization more fruitful: the strain of the apostolate, physical infirmity (cf. Gal 4:13-14); violence and persecution, shipwreck, hunger and thirst, and, as he himself tells us, a painful thorn in the flesh (cf. 2 Cor 12:7-10). Paul thus came to realize that “God chose what is weak in the world to shame the strong” (1 Cor 1:27), that we can do all things through him who strengthens us (cf. Phil 4:13), and that nothing can ever separate us from his love (cf. Rom 8:35-39). For this reason, at the end of his life – as we heard in the second reading – Paul was able to say: “the Lord stood by me” and “he will rescue me from every evil attack” (2 Tim 4:17). Paul had a Passover experience: the Lord set him free. Dear brothers and sisters, the Church looks to these two giants of faith and sees two Apostles who set free the power of the Gospel in our world, only because first they themselves had been set free by their encounter with Christ. Jesus did not judge them or humiliate them. Instead, he shared their life with affection and closeness. He supported them by his prayer, and even at times reproached them to make them change. To Peter, Jesus gently says: “I have prayed for you that your own faith may not fail” (Lk 22:32). And to Paul: “Saul, Saul, why do you persecute me?” (Acts 9:4). He does the same with us: he assures us of his closeness by praying and interceding for us before the Father, and gently reproaching us whenever we go astray, so that we can find the strength to arise and resume the journey. We too have been touched by the Lord; we too have been set free. Yet we need to be set free time and time again, for only a free Church is a credible Church. Like Peter, we are called to be set free from a sense of failure before our occasionally disastrous fishing. To be set free from the fear that paralyzes us, makes us seek refuge in our own securities, and robs us of the courage of prophecy. Like Paul, we are called to be set free from hypocritical outward show, free from the temptation to present ourselves with worldly power rather than with the weakness that makes space for God, free from a religiosity that makes us rigid and inflexible; free from dubious associations with power and from the fear of being misunderstood and attacked. 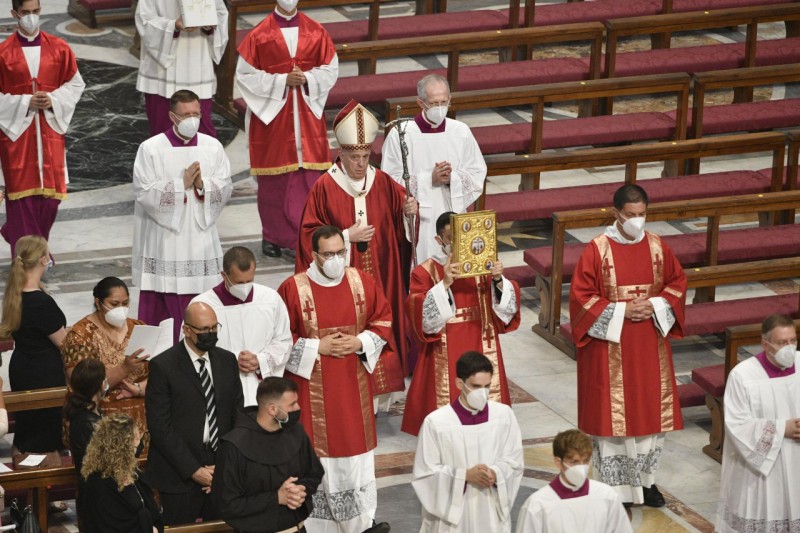 Pope Francis celebrates Mass for the Solemnity of Saints Peter and Paul in St. Peter's Basilica on June 29, 2021. Photo courtesy of Vatican Media.
Peter and Paul bequeath to us the image of a Church entrusted to our hands, yet guided by the Lord with fidelity and tender love, for it is he who guides the Church. A Church that is weak, yet finds strength in the presence of God. The image of a Church set free and capable of offering the world the freedom that the world by itself cannot give: freedom from sin and death, from resignation, and from the sense of injustice and the loss of hope that dehumanizes the lives of the women and men of our time. Let us ask, today in this celebration but afterwards as well: to what extent do our cities, our societies and our world need freedom? How many chains must be shattered and how many doors long shut must be opened! We can help bring this freedom, but only if we first let ourselves be set free by the newness of Jesus, and walk in the freedom of the Holy Spirit. Today our brother Archbishops receive the pallium. This sign of unity with Peter recalls the mission of the shepherd who gives his life for the flock. It is in giving his life that the shepherd, himself set free, becomes a means of bringing freedom to his brothers and sisters. Today, too, we are joined by a Delegation from the Ecumenical Patriarchate, sent for this occasion by our dear brother Bartholomew. Your welcome presence is a precious sign of unity on our journey of freedom from the distances that scandalously separate believers in Christ. Thank you for your presence. We pray for you, for all Pastors, for the Church and for all of us: that, set free by Christ, we may be apostles of freedom throughout the world. Text courtesy of Libreria Editrice Vaticana (click here for original source) 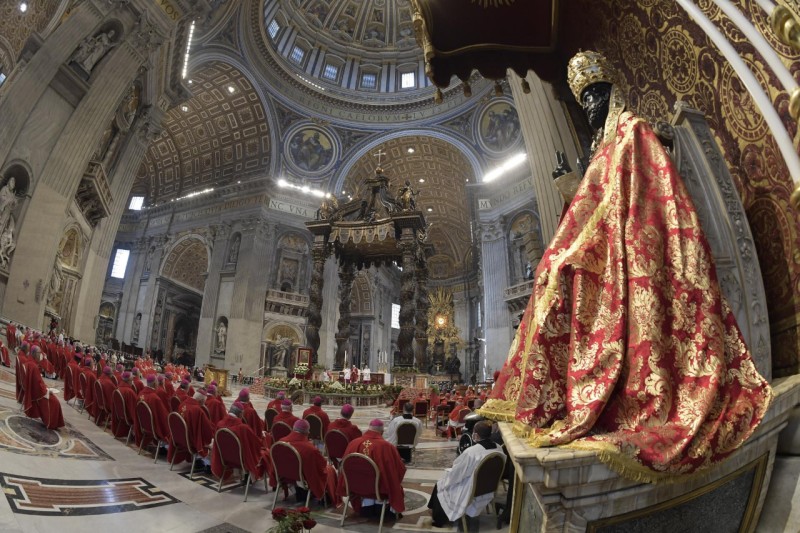 Pope Francis celebrates Mass for the Solemnity of Saints Peter and Paul in St. Peter's Basilica on June 29, 2021. Photo courtesy of Vatican Media.