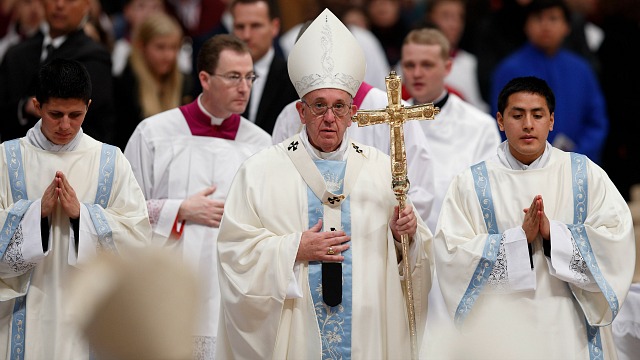 We have heard the words of the Apostle Paul: “When the fullness of time had come, God sent his Son, born of a woman” (Gal 4:4).
What does it mean to say that Jesus was born in “the fullness of time”?  If we consider that particular moment of history, we might quickly be deluded.  Rome had subjugated a great part of the known world by her military might.  The Emperor Augustus had come to power after five civil wars.  Israel itself had been conquered by the Roman Empire and the Chosen People had lost their freedom.  For Jesus’ contemporaries, it was certainly not the best of times.  To define the fullness of time, then, we should not look to the geopolitical sphere.
Another interpretation is needed, one which views that fullness from God’s standpoint.  It is when God decided that the time had come to fulfil his promise, that the fullness of time came for humanity.  History does not determine the birth of Christ; rather, his coming into the world enables history to attain its fullness.  For this reason, the birth of the Son of God inaugurates a new era, a new computation of time, the era which witnesses the fulfilment of the ancient promise.  As the author of the Letter to the Hebrews writes: “God spoke to our ancestors in many and various ways by the prophets, but in these last days he has spoken to us by a Son, whom he appointed heir of all things, through whom he also created the world.  He is the reflection of God’s glory and the exact imprint of God’s very being, and he sustains all things by his powerful word” (1:1-3).  The fullness of time, then, is the presence of God himself in our history.  Now we can see his glory, which shines forth in the poverty of a stable; we can be encouraged and sustained by his Word, made “little” in a baby.  Thanks to him, our time can find its fullness.
Nonetheless, this mystery constantly clashes with the dramatic experience of human history.  Each day, as we seek to be sustained by the signs of God’s presence, we encounter new signs to the contrary, negative signs which tend to make us think instead that he is absent.  The fullness of time seems to fade before the countless forms of injustice and violence which daily wound our human family.  Sometimes we ask ourselves how it is possible that human injustice persists unabated, and that the arrogance of the powerful continues to demean the weak, relegating them to the most squalid outskirts of our world.  We ask how long human evil will continue to sow violence and hatred in our world, reaping innocent victims.  How can the fullness of time have come when we are witnessing hordes of men, women and children fleeing war, hunger and persecution, ready to risk their lives simply to encounter respect for their fundamental rights?  A torrent of misery, swollen by sin, seems to contradict the fullness of time brought by Christ.
And yet this swollen torrent is powerless before the ocean of mercy which floods our world.  All of us are called to immerse ourselves in this ocean, to let ourselves be reborn, to overcome the indifference which blocks solidarity, and to leave behind the false neutrality which prevents sharing.  The grace of Christ, which brings our hope of salvation to fulfilment, leads us to cooperate with him in building an ever more just and fraternal world, a world in which every person and every creature can dwell in peace, in the harmony of God’s original creation.
At the beginning of a new year, the Church invites us to contemplate Mary’s divine maternity as an icon of peace.  In her, the ancient promise finds fulfilment.  She believed in the words of the angel, conceived her Son and thus became the Mother of the Lord.  Through her, through her “yes”, the fullness of time came about. The Gospel we have just heard tells us that the Virgin Mary “treasured all these words and pondered them in her heart” (Lk2:19).  She appears to us as a vessel filled to the brim with the memory of Jesus, as the Seat of Wisdom to whom we can have recourse to understand his teaching aright.  Today Mary makes it possible for us to grasp the meaning of events which affect us personally, events which also affect our families, our countries and the entire world.  Where philosophical reason and political negotiation cannot reach, there the power of faith, which brings the grace of Christ’s Gospel, can reach, opening ever new pathways to reason and to negotiation.
Blessed are you, Mary, for you gave the Son of God to our world.  But even more blessed are you for having believed in him.  Full of faith, you conceived Jesus first in your heart and then in your womb, and thus became the Mother of all believers (cf. Saint Augustine, Sermo 215,4).  Send us your blessing on this day consecrated to your honour.  Show us the face of Jesus your Son, who bestows upon the entire world mercy and peace.

Pope Francis: Angelus appeal for peace on New Year’s Day
Pope Francis renewed his calls for peace and goodwill throughout the Earth on Friday, New Year’s Day, the Solemnity of the Mother of God and the World Day of Peace. The Holy Father’s appeal came at the Angelus prayer with pilgrims and visitors gathered in St. Peter’s Square after Mass in St. Peter’s Basilica. “Today we celebrate the World Day of Peace, whose theme is: ‘Overcome Indifference and win Peace’,” said Pope Francis. “That peace, which God the Father wants to sow in the world, must be cultivated by us,” he continued. “Not only: it must also be ‘conquered’. This involves a real struggle, a spiritual battle that takes place in our hearts, for the enemy of peace is not only war, but also indifference, which makes us think only of ourselves and creates barriers, suspicions, fears and closures [of mind and heart].”
Pope Francis went on to say, “We have, thank God, much information; but sometimes we are so inundated with news that we are distracted from reality, from the brother and sister who needs us: let us begin to open our hearts, awakening attention to the next.”
“This,” said Pope Francis, “is the way to win the peace.”
After the traditional prayer of Marian devotion, Pope Francis returned the New Year’s greetings he received the evening before from the President of the Italian Republic, Sergio Mattarella, and offered thanks to all those involved in peace initiatives in Rome, throughout Italy and in all the world.
“I express gratitude for the many initiatives of prayer and action for peace organized all over the world on the occasion of today's World Day of Peace,” he said, making particular mention of the National March that took place New Year’s Eve in the city of Molfetta, under the joint sponsorship of the Italian Bishops’ Conference, Caritas Internationalis, Pax Christi and Catholic Action. “It is good to know that many people, especially young people, have chosen this way of ringing in the New Year.”
The Angelus prayer followed shortly after the conclusion of Mass in St. Peter’s Basilica to mark the New Year’s Solemnity of the Mother of God, over which Pope Francis presided and at which he delivered the homily. “At the beginning of a new year,” said Pope Francis, “the Church invites us to contemplate Mary’s divine maternity as an icon of peace.  In her, the ancient promise finds fulfilment.” The Holy Father went on to say, “She believed in the words of the angel, conceived her Son and thus became the Mother of the Lord.  Through her, through her ‘yes’, the fullness of time came about."
The Gospel reading of the day tells of how the Virgin Mary treasured all the words the Angel spoke to her, and contemplated them in her heart (Cf. Lk2:19). “She appears to us,” continued Pope Francis, “as a vessel filled to the brim with the memory of Jesus, as the Seat of Wisdom to whom we can have recourse to understand his teaching aright.”
“In this day,” he said, “Mary makes it possible for us to grasp the meaning of events which affect us personally, events which also affect our families, our countries and the entire world.”
Watch Pope Francis celebrate Mass for the Solemnity of Mary, Mother of God below:
--
CNS photo/Paul Haring