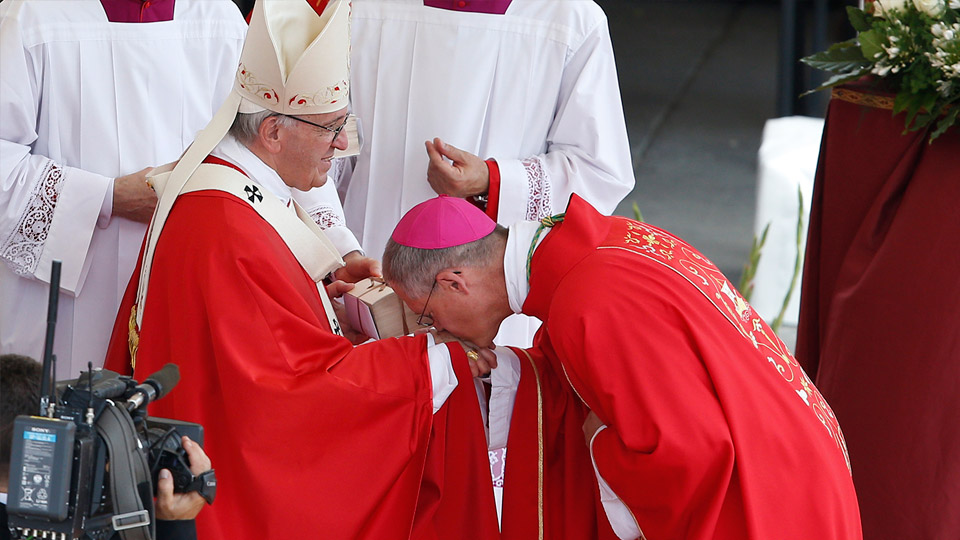 CNS photo/Paul Haring
On the Solemnity of the Apostles Peter and Paul, at 9:30 am at St. Peter's Square, Pope Francis blessed the pallia (plural of pallium), taken from the Confession of the Apostle Peter and destined for Metropolitan Archbishops appointed during the past year. The pallium will then be imposed on each Metropolitan Archbishop by the Pontifical Representative in their respective Metropolitan Sees. After the Pope's Blessing Rite, the Pope presided over the Eucharistic Celebration with the College of Cardinals, with Metropolitan Archbishops, Bishops and Priests. Traditionally on this feast of the Apostles Peter and Paul, Patrons of the City of Rome, there is present at this mass a delegation of the Ecumenical Patriarchate of Constantinople, sent by His Beatitude Bartholomew and led by His Eminence Job, Archbishop of Telmessos, accompanied by by Reverend Fathers Ambrosios Chorozidis and Agathanghelos Siskos. During the Eucharistic Celebration, after the proclamation of the Gospel, the Pope gave the following homily:

What is the significance of the pallium (Latin plural is “pallia”) in today’s liturgical celebration? This ancient sign, which the Bishops of Rome have worn since the fourth century, may be considered an image of the yoke of Christ, which the Bishop takes upon his shoulders. The pallium is a circle of wool that hangs around the neck and shoulders with two long pieces draping one over the chest and the other along the back. It is decorated with six black crosses and weighed with pieces of lead. The wool for the pallium comes from two lambs offered every year to the Pope on January 21, Feast of St. Agnes. They are first taken to the Church of St. Agnes to be blessed. The lambs arrive wearing floral crowns, one white and one red. These represent the purity of Agnes, which the archbishops should emulate, and the martyrdom of Agnes, which the archbishops should be prepared to follow. The lambs are then shorn and the pallia are made. On the eve of the feast of the great apostles Peter and Paul, (June 28) the pallia are stored overnight in the silver casket above Peter's tomb in the Vatican crypt. The following day (June 29) the pallia are given to the newly appointed metropolitan bishops, the only occasion in which more than one bishop can be seen wearing the pallium at the same time. Symbolically, the Pope is sharing his mission to "Feed my sheep and lambs" with the archbishops. The wool over the shoulders evokes the lamb over the shoulders of the Good Shepherd. It also reminds the archbishops of the burdens of their office. By investing each new Archbishop with the pallium, the Holy Father confers some of his own weight and responsibilities on him.