Pope Francis’ Homily at Mass on the Solemnity of Mary, Mother of God and on the 50th World Day of Prayer for Peace 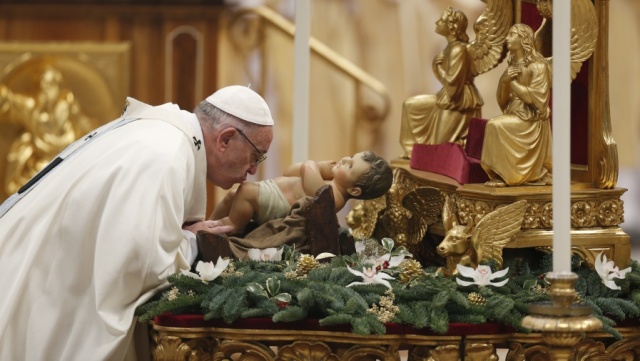 (Photo: CNS/Paul Haring)
At 10 am this morning in the Vatican Basilica, Pope Francis presided at the celebration of the Mass on the Solemnity of Mary, Mother of God in the Octave of Christmas and in commemoration of the 50th World Day of Peace on the theme: “Nonviolence: A Style of Politics for Peace.” Below you will find the Holy Father’s homily at mass: “Mary treasured all these things and pondered them in her heart!” (Lk 2:19). In these words, Luke describes the attitude with which Mary took in all that they had experienced in those days. Far from trying to understand or master the situation, Mary is the woman who can treasure, that is to say, protect and guard in her heart, the passage of God in the life of his people. Deep within, she had learned to listen to the heartbeat of her Son, and that in turn taught her, throughout her life, to discover God’s heartbeat in history. She learned how to be a mother, and in that learning process she gave Jesus the beautiful experience of knowing what it is to be a Son. In Mary, the eternal Word not only became flesh, but also learned to recognize the maternal tenderness of God. With Mary, the God-Child learned to listen to the yearnings, the troubles, the joys and the hopes of the people of the promise. With Mary, he discovered himself a Son of God’s faithful people. 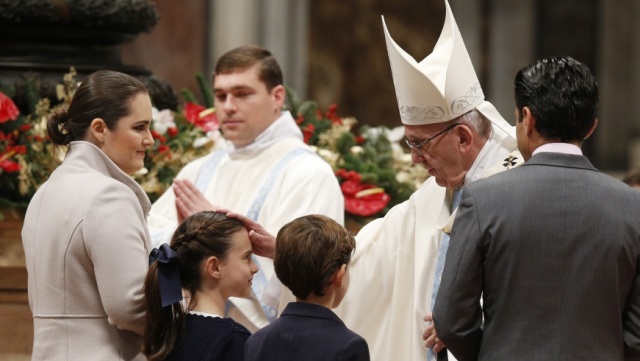 (Photo: CNS/Paul Haring)
In the Gospels, Mary appears as a woman of few words, with no great speeches or deeds, but with an attentive gaze capable of guarding the life and mission of her Son, and for this reason, of everything that he loves. She was able to watch over the beginnings of the first Christian community, and in this way she learned to be the mother of a multitude. She drew near to the most diverse situations in order to sow hope. She accompanied the crosses borne in the silence of her children’s hearts. How many devotions, shrines and chapels in the most far-off places, how many pictures in our homes, remind us of this great truth. Mary gave us a mother’s warmth, the warmth that shelters us amid troubles, the maternal warmth that keeps anything or anyone from extinguishing in the heart of the Church the revolution of tenderness inaugurated by her Son. Where there is a mother, there is tenderness. By her motherhood, Mary shows us that humility and tenderness are not virtues of the weak but of the strong. She teaches us that we do not have to mistreat others in order to feel important (cf. Evangelii Gaudium, 288). God’s holy people has always acknowledged and hailed her as the Holy Mother of God. To celebrate Mary as Mother of God and our mother at the beginning of the new year means recalling a certainty that will accompany our days: we are a people with a Mother; we are not orphans. 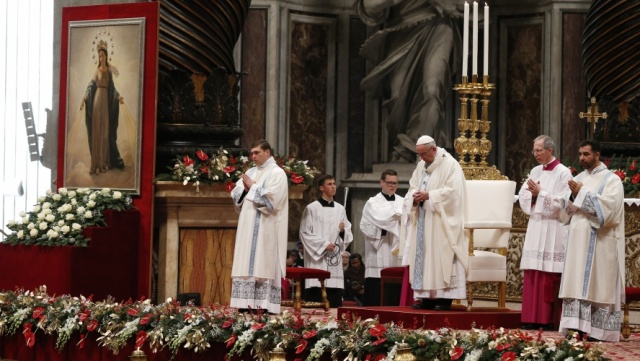 (Photo: CNS/Paul Haring)
Mothers are the strongest antidote to our individualistic and egotistic tendencies, to our lack of openness and our indifference. A society without mothers would not only be a cold society, but a society that has lost its heart, lost the “feel of home”. A society without mothers would be a merciless society, one that has room only for calculation and speculation. Because mothers, even at the worst times, are capable of testifying to tenderness, unconditional self-sacrifice and the strength of hope. I have learned much from those mothers whose children are in prison, or lying in hospital beds, or in bondage to drugs, yet, come cold or heat, rain or draught, never stop fighting for what is best for them. Or those mothers who in refugee camps, or even the midst of war, unfailingly embrace and support their children’s sufferings. Mothers who literally give their lives so that none of their children will perish. Where there is a mother, there is unity, there is belonging, belonging as children. To begin the year by recalling God’s goodness in the maternal face of Mary, in the maternal face of the Church, in the faces of our own mothers, protects us from the corrosive disease of being “spiritual orphans”. It is the sense of being orphaned that the soul experiences when it feels motherless and lacking the tenderness of God, when the sense of belonging to a family, a people, a land, to our God, grows dim. This sense of being orphaned lodges in a narcissistic heart capable of looking only to itself and its own interests. It grows when what we forget that life is a gift we have received – and owe to others – a gift we are called to share in this common home. 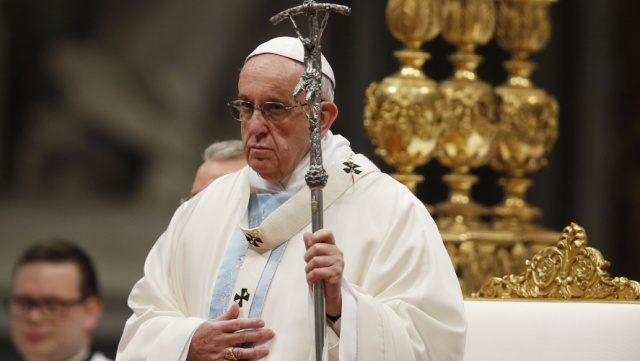 (Photo: CNS/Paul Haring)
It was such a self-centred orphanhood that led Cain to ask: “Am I my brother's keeper?” (Gen 4:9). It was as if to say: he doesn’t belong to me; I do not recognize him. This attitude of spiritual orphanhood is a cancer that silently eats away at and debases the soul. We become all the more debased, inasmuch as nobody belongs to us and we belong to no one. I debase the earth because it does not belong to me; I debase others because they do not belong to me; I debase God because I do not belong to him, and in the end we debase our very selves, since we forget who we are and the divine “family name” we bear. The loss of the ties that bind us, so typical of our fragmented and divided culture, increases this sense of orphanhood and, as a result, of great emptiness and loneliness. The lack of physical (and not virtual) contact is cauterizing our hearts (cf. Laudato Si’, 49) and making us lose the capacity for tenderness and wonder, for pity and compassion. Spiritual orphanhood makes us forget what it means to be children, grandchildren, parents, grandparents, friends and believers. It makes us forget the importance of playing, of singing, of a smile, of rest, of gratitude. Celebrating the feast of the Holy Mother of God makes us smile once more as we realize that we are a people, that we belong, that only within a community, within a family, can we as persons find the “climate”, the “warmth” that enables us to grow in humanity, and not merely as objects meant to “consume and be consumed”. To celebrate the feast of the Holy Mother of God reminds us that we are not interchangeable items of merchandise or information processors. We are children, we are family, we are God’s People. Celebrating the Holy Mother of God leads us to create and care for common places that can give us a sense of belonging, of being rooted, of feeling at home in our cities, in communities that unite and support us (cf. Laudato Si’, 151). Jesus, at the moment of his ultimate self-sacrifice, on the cross, sought to keep nothing for himself, and in handing over his life, he also handed over to us his Mother. He told Mary: Here is your son; here are your children. We too want to receive her into our homes, our families, our communities and nations. We want to meet her maternal gaze. The gaze that frees us from being orphans; the gaze that reminds us that we are brothers and sisters, that I belong to you, that you belong to me, that we are of the same flesh. The gaze that teaches us that we have to learn how to care for life in the same way and with the same tenderness that she did: by sowing hope, by sowing a sense of belonging and of fraternity. Celebrating the Holy Mother of God reminds us that we have a Mother. We are not orphans. We have a Mother. Together let us all confess this truth. I invite you to acclaim it three times, like the faithful of Ephesus: Holy Mother of God, Holy Mother of God, Holy Mother of God.