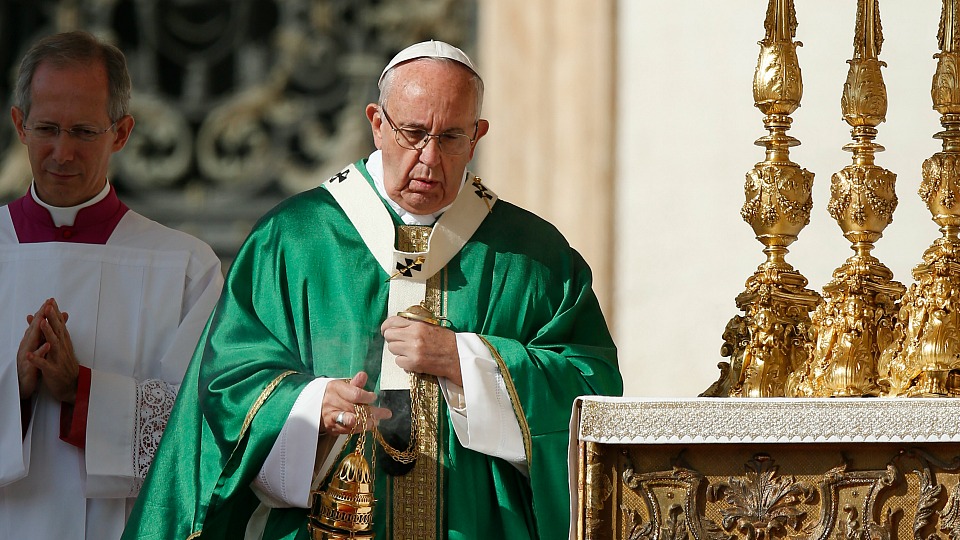 Look to the model of Mary

Pope Francis celebrated Mass for the Marian Jubilee on Sunday as part of the celebrations for the Year of Mercy. In his homily he told the faithful present in St Peter's Square that, "we are given a model, indeed the model, to whom we can look: Mary, our Mother." The Pope also stressed the importance of gratitude saying, "to be able to offer thanks, to be able to praise the Lord for what he has done for us: this is important!" Below find the English translation of the Pope's Homily:

This Sunday’s (cf. Lk 17,11-19) Gospel invites us to acknowledge God’s gifts with wonder and gratitude. On the way to his death and resurrection, Jesus meets ten lepers, who approach him, keep their distance and tell their troubles to the one whom their faith perceived as a possible saviour: “Jesus, Master, have mercy on us!” (v. 13). They are sick and they are looking someone to heal them. Jesus responds by telling them to go and present themselves to the priests, who according to the Law were charged with certifying presumed healings. In this way, Jesus does not simply make them a promise; he tests their faith. At that moment, in fact, the ten were not yet healed. They were restored to health after they set out in obedience to Jesus’ command. Then, rejoicing, they showed themselves to the priests and continued on their way. They forgot the Giver, the Father, who cured them through Jesus, his Son made man. All but one: a Samaritan, a foreigner living on the fringes of the chosen people, practically a pagan! This man was not content with being healed by his faith, but brought that healing to completion by returning to express his gratitude for the gift received. He recognized in Jesus the true Priest, who raised him up and saved him, who can now set him on his way and accept him as one of his disciples. To be able to offer thanks, to be able to praise the Lord for what he has done for us: this is important! So we can ask ourselves: Are we capable of saying “Thank you”? How many times do we say “Thank you” in our family, our community, and in the Church? How many times do we say “Thank you” to those who help us, to those close to us, to those who accompany us through life? Often we take everything for granted! This also happens with God. It is easy to approach the Lord to ask for something, but to return and give thanks... That is why Jesus so emphasizes the failure of the nine ungrateful lepers: “Were not ten made clean? But the other nine, where are they? Was no one found to return and give praise to God except this foreigner?” (Lk 17:17-18). On this Jubilee day, we are given a model, indeed the model, to whom we can look: Mary, our Mother. After hearing the message of the Angel, she lifted up her heart in a song of praise and thanksgiving to God: “My soul magnifies the Lord…” Let us ask our Lady to help us recognize that everything is God’s gift, and to be able to say “Thank you”. Then our joy will be complete. It also takes humility to be able to give thanks. In the first reading we heard the singular story of Naaman, the commander of the army of the King of Aram (cf. 2 Kg 5:14-17). In order to be cured of his leprosy, he accepts the suggestion of a poor slave and entrusts himself to the prophet Elisha, whom he considered an enemy. Naaman was nonetheless ready to humble himself. Elisha asks nothing of him, but simply orders him to bathe in the waters of the River Jordan. This request leaves Naaman perplexed, even annoyed. Can a God who demands such banal things truly be God? He would like to turn back, but then he agrees to be immersed in the Jordan and immediately he is cured. The heart of Mary, more than any other, is a humble heart, capable of accepting God’s gifts. In order to become man, God chose precisely her, a simple young woman of Nazareth, who did not dwell in the palaces of power and wealth, who did not do extraordinary things. Let us ask ourselves if we are prepared to accept God’s gifts, or prefer instead to shut ourselves up within our forms of material security, intellectual security, the security of our plans. Significantly, Naaman and the Samaritans were two foreigners. How many foreigners, including persons of other religions, give us an example of values that we sometimes forget or set aside! Those living beside us, who may be scorned and sidelined because they are foreigners, can instead teach us how to walk on the path that the Lord wishes. The Mother of God, together with Joseph her spouse, knew what it was to live far from home. She too was long a foreigner in Egypt, far from her relatives and friends. Yet her faith was able to overcome the difficulties. Let us cling to this simple faith of the Holy Mother of God; let us ask her that we may always come back to Jesus and express our thanks for the many benefits we have received from his mercy.