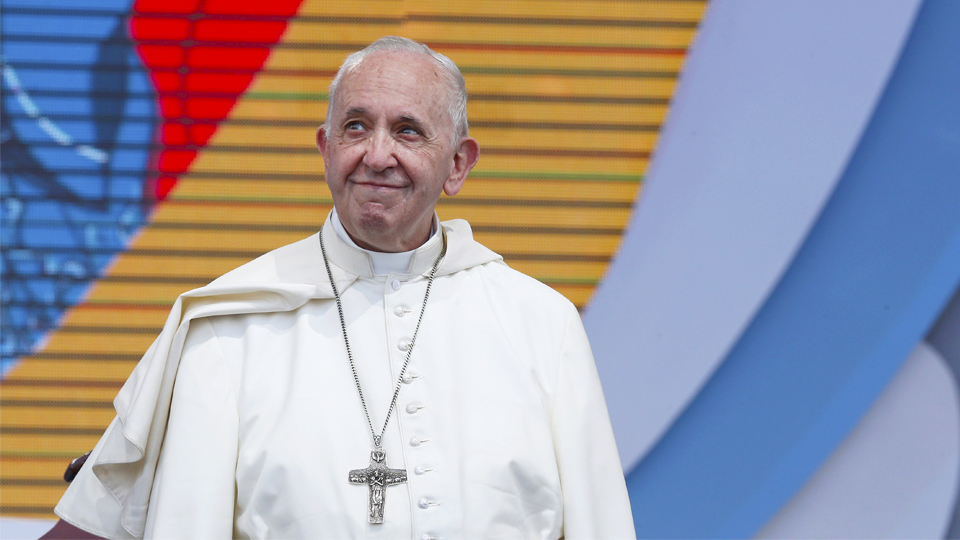 (Credit: CNS/Paul Haring)
6 years ago today, Catholics gathered in front of computer and television screens for their first glimpse of the man who would succeed Benedict XVI as pope. Amidst cheers from the crowd in St. Peter's Square, we caught through the camerlengo's Latin a last name: Bergoglio. But there was no time to find out who this Bergoglio was because soon Cardinal Tauran was announcing what we wanted to know even more (and perhaps had been taking bets on): qui sibi nomen imposuit (who takes the name)....Franciscum! Pope Francis. It seemed strange at the time. And it took people a while to stop saying "Pope Francis I". But how quickly this unfamiliar face from Argentina became a part of our lives. In honour of the sixth anniversary of this historic occasion, here are some of my favourite photos from the past year in the life of our Holy Father. 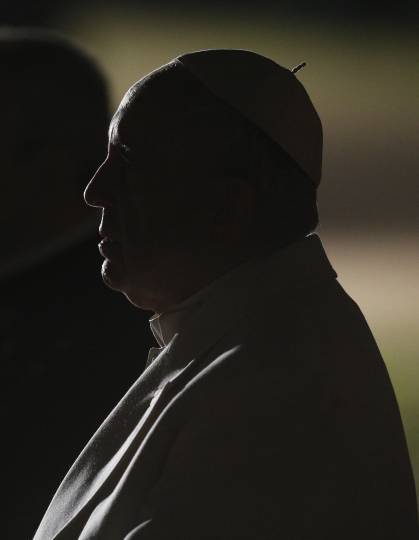 (Credit: CNS/Paul Haring)
As usual, it's been a busy year for our pontiff. As well as meetings public and private,  he's led the Church through a Synod of Bishops... 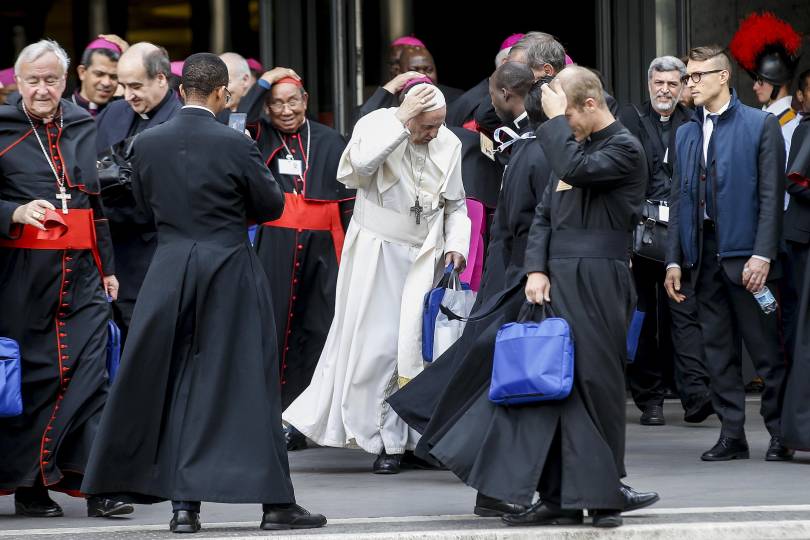 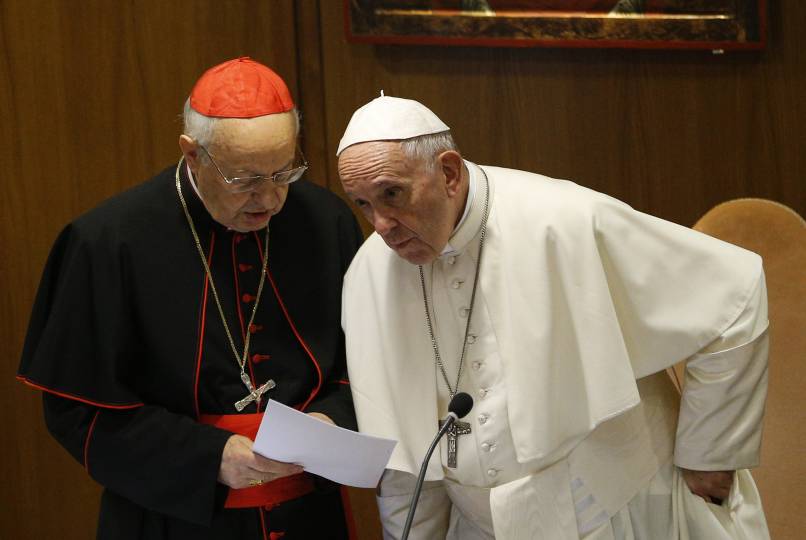 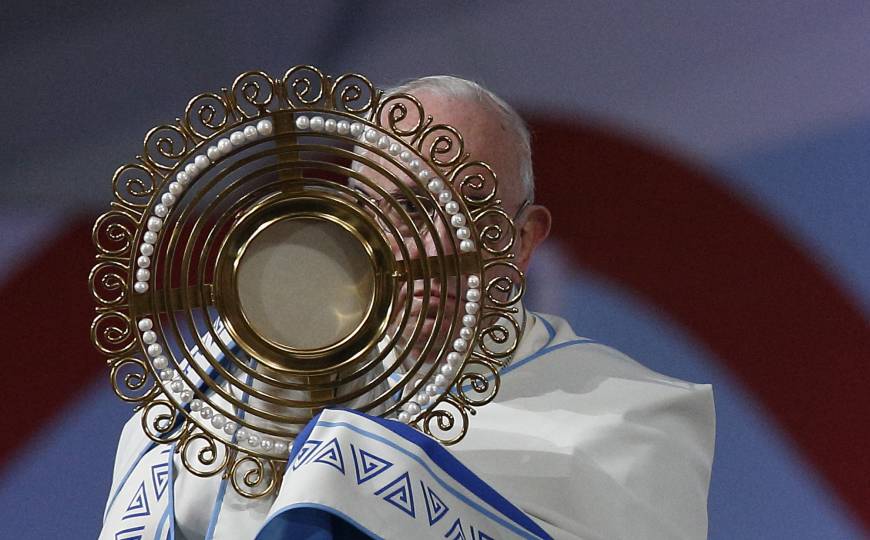 (Credit: CNS/Paul Haring)
...and a sexual abuse scandal that continues to rear its ugly head. 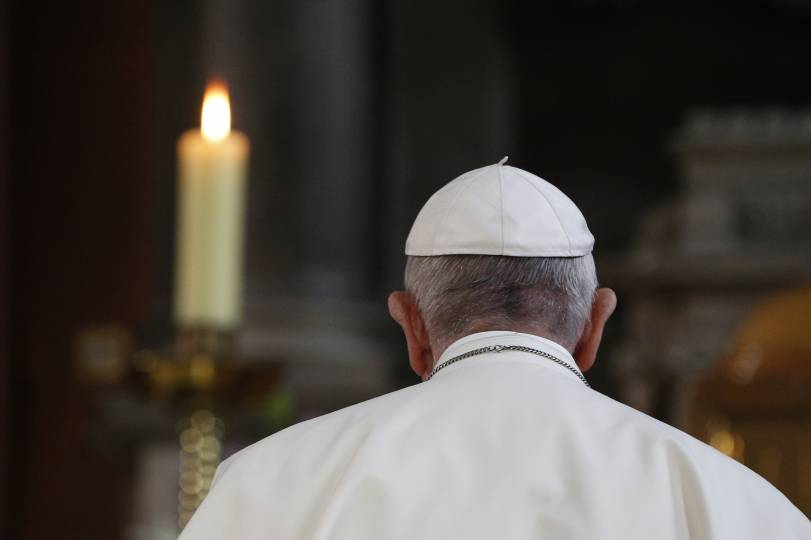 
I think this is one of the most moving photographs of the year.

Remember Alfie Evans? His parents fought, and lost, a battle to keep him on life support in England. Here, Alfie's father meets privately with Pope Francis. 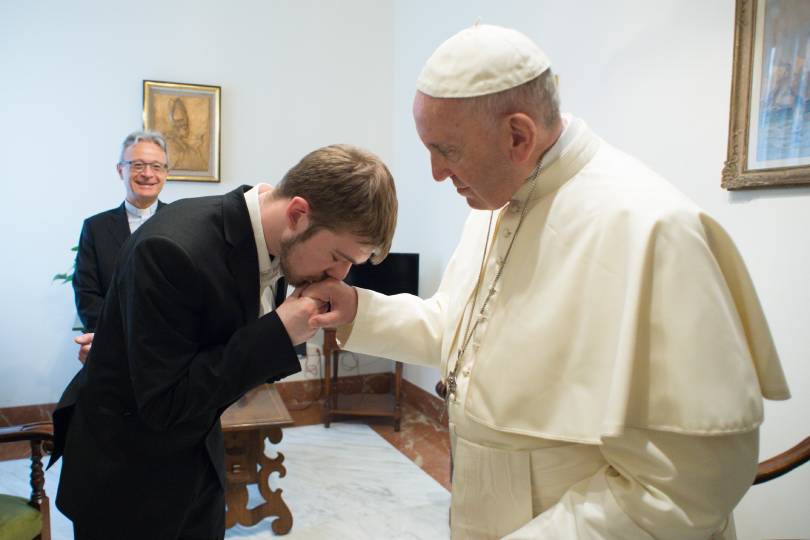 (Credit: CNS/Vatican Media)
And who can forget this moment of tenderness which reminded us that along with his authoritative, administrative, and diplomatic responsibilities, the pope is first and foremost a spiritual father? 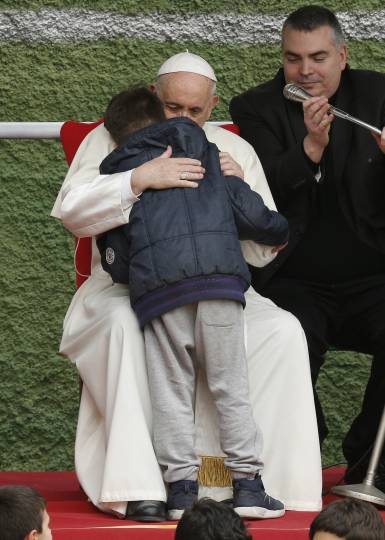 (Credit: CNS/Paul Haring)
And although a picture is worth a thousand words, sometimes you just need a video: watch it here. But make sure to locate your tissues first.   For all the images of Pope Francis embracing, shaking hands with, signing documents with, or exchanging gifts with other religious leaders, it is this candid moment from the prayer meeting in Bari last July that I believe best expresses the spirit of ecumenism and encounter that Pope Francis leads us into. 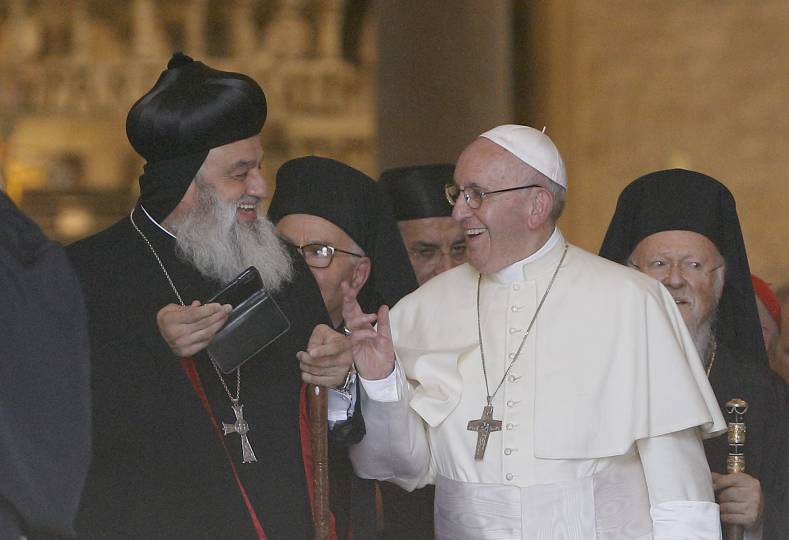 
And what about unity within the Catholic Church?

So often warring factions within the Church use one pope or the other as a rallying point. But this photo is a good reminder that they both encourage us to love and unity. The camera here has captured a beautiful expression of mutual affection and respect. 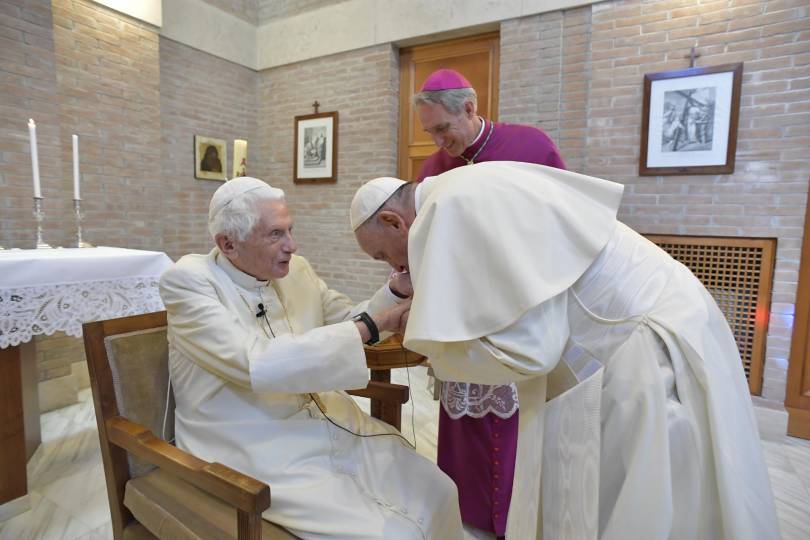 (Credit: CNS/Vatican Media)
And in this touching photo from the Feast of the Epiphany earlier this year, Pope Francis reminds us of the source of our unity. 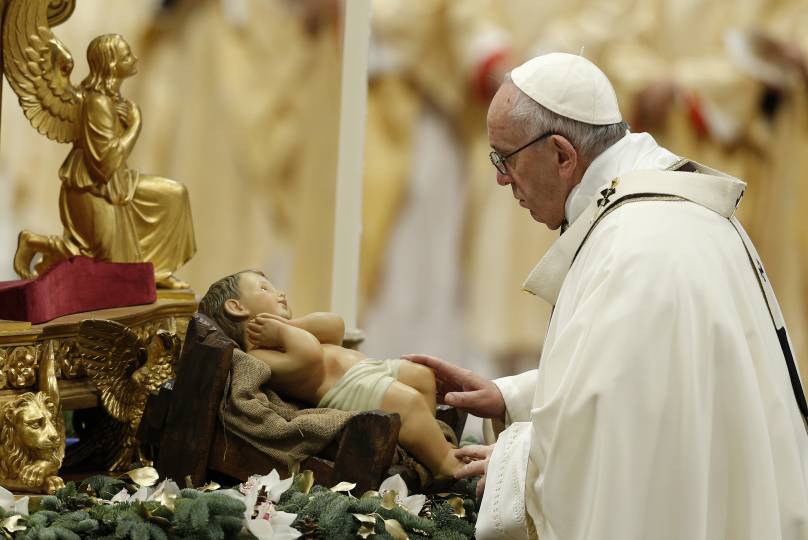 
Pope Francis is a man on the move.

Sometimes it seems like every time I turn around he's flying off to somewhere else for an intensive few days of meetings and greetings and speeches. I am constantly amazed by the energy of this 82-year-old man! 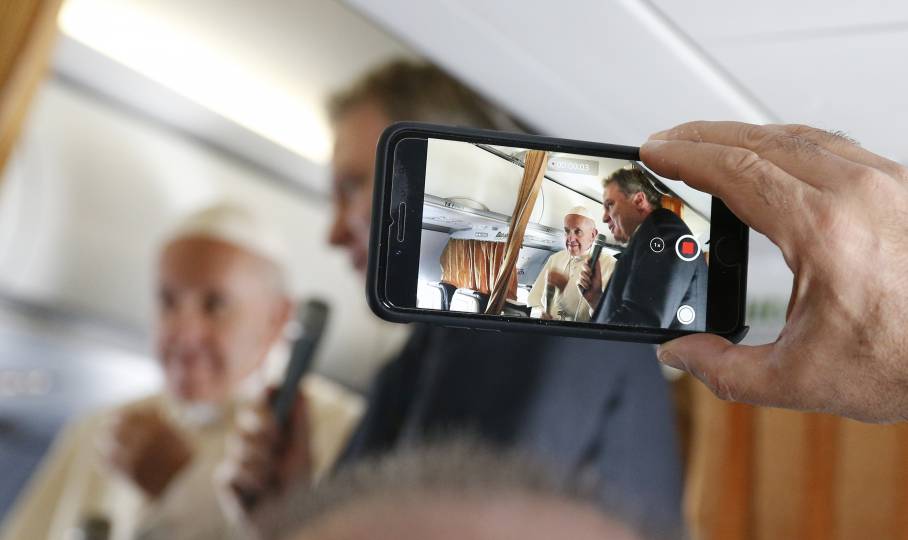 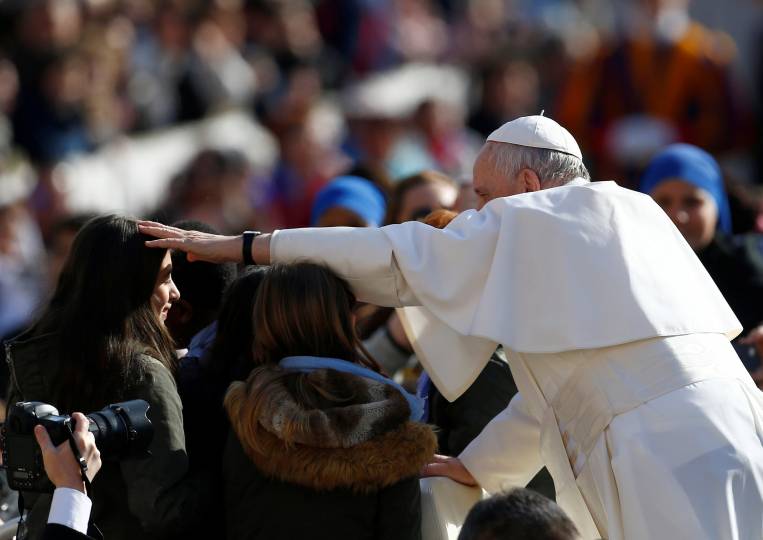 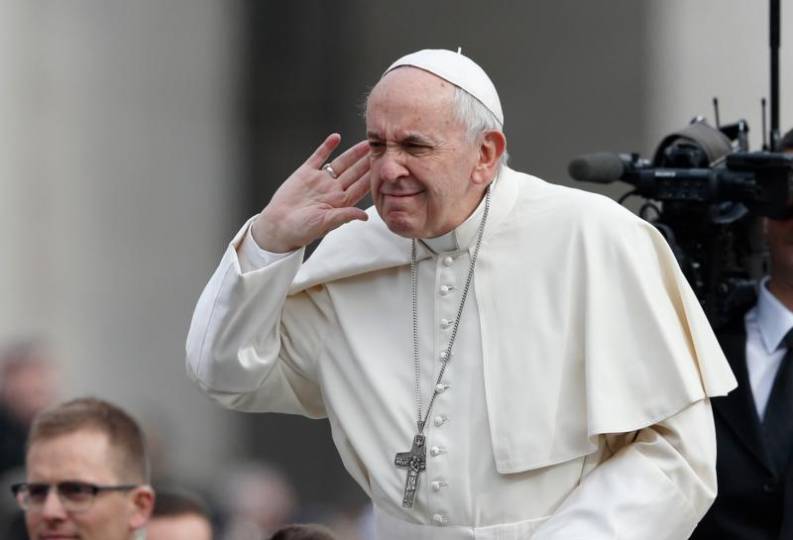 (Credit: CNS/Paul Haring)
In an interview for a S+L original documentary commemorating the 75th anniversary of the Canadian Conference of Catholic Bishops, Bishop Pierre Morissette says of Pope Francis:

I see what he means. 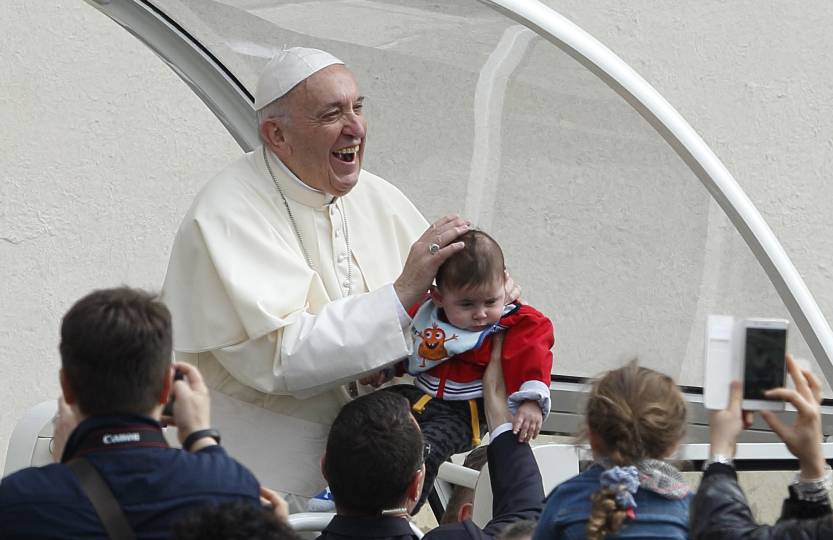 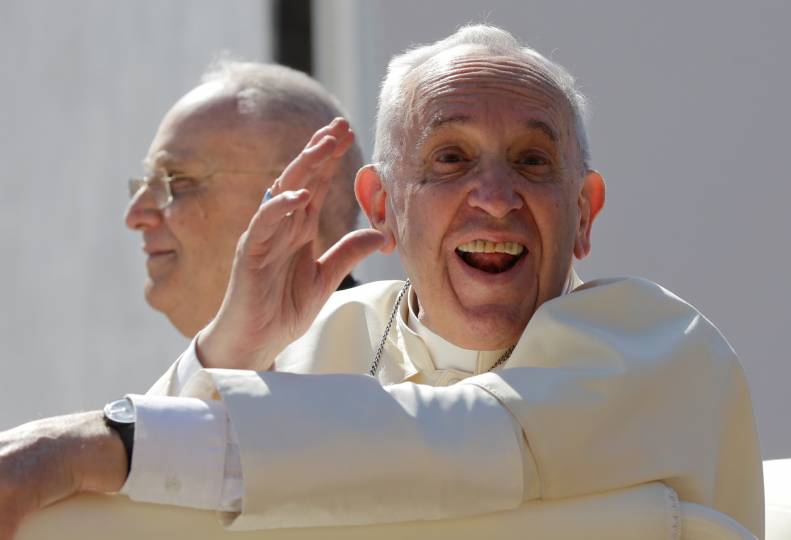 In December, S+L producer Sebastian Gomes had the opportunity to interview Pope Francis for his forthcoming documentary The Francis Impact (find out more HERE). 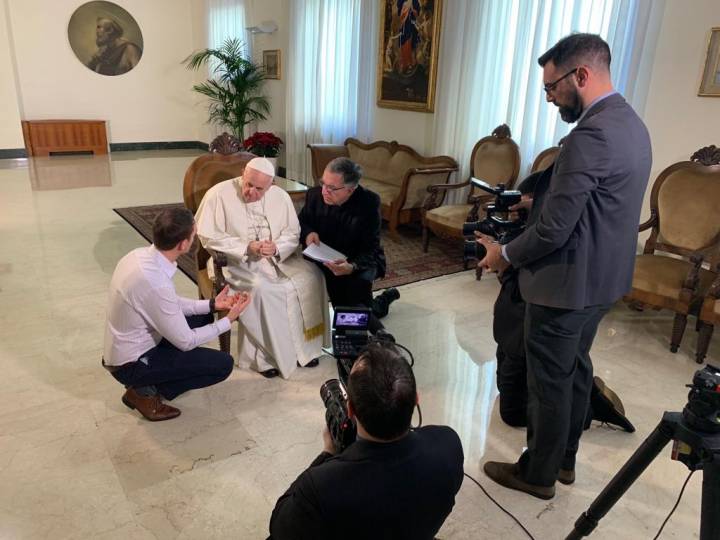 Thank you, Holy Father, for another great year!