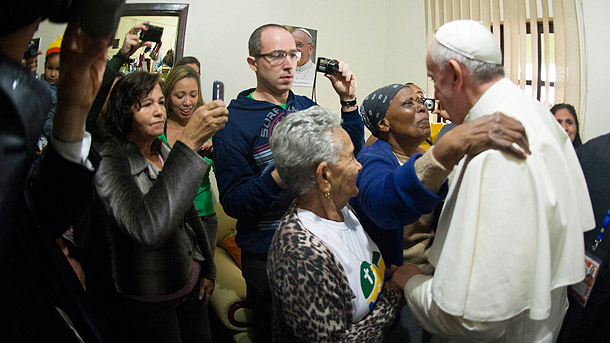 During his July 22-29 visit to Brazil, Pope Francis' homilies and addresses had a simplicity and directness that inspired the faithful with confidence in God's love, hope for reform and love of neighbor, especially the poor. But two of his speeches went beyond pastoral exhortations to lay out his vision and agenda for the church -- his July 27 address to the Brazilian bishops and his address the next day to the episcopal council of CELAM, the Latin American conference of bishops. Where does Francis want to lead the church? What does he want the bishops to do? Church as reconciler: In his address to the Brazilian bishops, Francis retells the story of the Madonna of Aparecida as a parable of the Latin American church. Tired fishermen, who have experienced failure in a dilapidated boat with old, torn nets, find a broken statue that must be mended. "In Aparecida, from the beginning, God's message was one of restoring what was broken, reuniting what had been divided," Francis explained. "Walls, chasms, differences which still exist today are destined to disappear. The church cannot neglect this lesson: She is called to be a means of reconciliation." Church of the heart: For Francis, faith enters the church through the heart of the poor, not through the heads of intellectuals. Francis confessed that "perhaps we have reduced our way of speaking about mystery to rational explanations, but for ordinary people the mystery enters through the heart." This leads him to understand the missionary role of the church not as winning an argument but as offering something beautiful. "Only the beauty of God can attract. God's way is through enticement, allure," he told the bishops. "He reawakens in us a desire to call our neighbors in order to make known his beauty. Mission is born precisely from this divine allure, by this amazement born of encounter." A church with a simple message: Francis concluded, "The results of our pastoral work do not depend on a wealth of resources, but on the creativity of love." He argued that the message should be kept simple. "At times we lose people because they don't understand what we are saying, because we have forgotten the language of simplicity and import an intellectualism foreign to our people." This church does not obsess over whether Jesus is "one in being" or "consubstantial" with the Father. Rather, it presents Jesus as the compassion of God. Church of Emmaus: Using the Gospel story of Emmaus, Francis talked to the bishops about people who have left the church because they "now think that the church -- their Jerusalem -- can no longer offer them anything meaningful and important." He does not blame the culture, he does not harangue against relativism, consumerism and other "isms"; rather, he calls for self-examination by the bishops. Perhaps the church appeared too weak, perhaps too distant from their needs, perhaps too poor to respond to their concerns, perhaps too cold, perhaps too caught up with itself, perhaps a prisoner of its own rigid formulas, perhaps the world seems to have made the church a relic of the past, unfit for new questions; perhaps the church could speak to people in their infancy but not to those come of age. Faced with this Emmaus situation, what does Francis suggest?

Francis then presented practical challenges for the Brazilian (and other) bishops that follow from this ecclesiology: In speaking to the coordinating committee of CELAM, Francis continued to flesh out his agenda for the bishops. The center is Jesus Christ. Missionary discipleship does not allow for self-absorption or self-centeredness. "Either it points to Jesus Christ or it points to the people to whom he must be proclaimed," Francis said. Neither the missionary nor the church is the "center," he proclaimed. "The center is Jesus Christ, who calls us and sends us forth." When the church "makes herself the 'center,' she becomes merely functional, and slowly but surely turns into a kind of NGO." With his usual humility, Pope Francis acknowledged that he and the bishops are lagging in what he calls "pastoral conversion" and could do better. He sets a high standard to which he and other bishops should aspire.

Bishops must be pastors, close to people, fathers and brothers, and gentle, patient and merciful. Men who love poverty, both interior poverty, as freedom before the Lord, and exterior poverty, as simplicity and austerity of life. Men who do not think and behave like "princes." Men who are not ambitious, who are married to one church without having their eyes on another. Men capable of watching over the flock entrusted to them and protecting everything that keeps it together, guarding their people out of concern for the dangers which could threaten them, but above all instilling hope, so that light will shine in people's hearts. Men capable of supporting with love and patience God's dealings with his people. The bishop has to be among his people in three ways: in front of them, pointing the way; among them, keeping them together and preventing them from being scattered; and behind them, ensuring that no one is left behind, but also, and primarily, so that the flock itself can sniff out new paths.

It is clear from this description that Francis will make pastoral qualities a high priority in the selection of new bishops. If he is successful in finding such bishops, a new style of leadership will spread from Rome throughout the Catholic world. [Jesuit Fr. Thomas Reese is a senior analyst for NCR. His email address is treese@ncronline.org.] - Photo: Pope Francis is embraced by a woman during a visit with residents at a home in the Varginha slum in Rio de Janeiro July 25. (CNS photo/L'Osservatore Romano via Reuters)