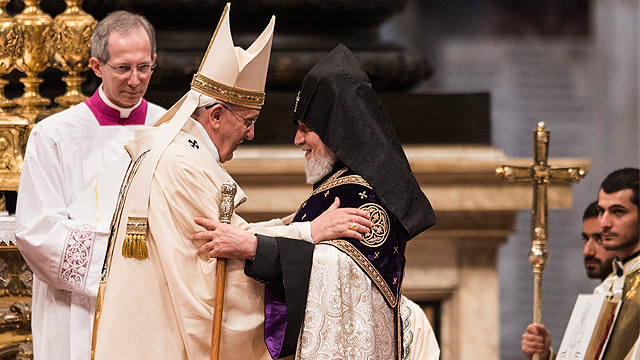 Pope Francis celebrated Mass in St. Peter's Basilica on Sunday morning - the Octave of Easter and Divine Mercy Sunday, sometimes called Quasimodo Sunday after the first word of the entrance antiphon, which sings of how we are to desire, like newborn babes, the pure spiritual milk that shall nourish us on our way to salvation - with the Patriarch of the Armenian Catholic Church, His Beatitude Nerses Bedros XIX, and in the presence of His Holiness Karekin II, Catholicos of All Armenians, and His Holiness Aram I, Catholicos of the Holy See of Cilicia of the Armenian Apostolic Church.
During the course of the liturgy, the Holy Father declared St. Gregory of Narek - a 10th century Armenian monk and mystic - Doctor of the Church.
The Mass is also marking the 100th anniversary of the beginning of the Medz Yeghern, in which as many as 1.5 million Armenians perished under the Ottoman Empire. Below, please find the official English translation of the Holy Father's prepared homily, along with his message to the Armenians:

Saint John, who was in the Upper Room with the other disciples on the evening of the first day after the Sabbath, tells us that Jesus came and stood among them, and said, “Peace be with you!” and he showed them his hands and his side (Jn 20:19-20); he showed them his wounds.  And in this way they realized that it was not an apparition: it was truly him, the Lord, and they were filled with joy.
On the eighth day Jesus came once again into the Upper Room and showed his wounds to Thomas, so that he could touch them as he had wished to, in order to believe and thus become himself a witness to the Resurrection. To us also, on this Sunday which Saint John Paul II wished to dedicate to Divine Mercy, the Lord shows us, through the Gospel, his wounds.  They are wounds of mercy.  It is true: the wounds of Jesus are wounds of mercy.
Jesus invites us to behold these wounds, to touch them as Thomas did, to heal our lack of belief.  Above all, he invites us to enter into the mystery of these wounds, which is the mystery of his merciful love. Through these wounds, as in a light-filled opening, we can see the entire mystery of Christ and of God: his Passion, his earthly life – filled with compassion for the weak and the sick – his incarnation in the womb of Mary.  And we can retrace the whole history of salvation: the prophecies – especially about the Servant of the Lord, the Psalms, the Law and the Covenant; to the liberation from Egypt, to the first Passover and to the blood of the slaughtered lambs; and again from the Patriarchs to Abraham, and then all the way back to Abel, whose blood cried out from the earth.  All of this we can see in the wounds of Jesus, crucified and risen; with Mary, in her Magnificat, we can perceive that, “His mercy extends from generation to generation” (cf. Lk1:50).
Faced with the tragic events of human history we can feel crushed at times, asking ourselves, “Why?”.  Humanity’s evil can appear in the world like an abyss, a great void: empty of love, empty of goodness, empty of life.  And so we ask: how can we fill this abyss?  For us it is impossible; only God can fill this emptiness that evil brings to our hearts and to human history.  It is Jesus, God made man, who died on the Cross and who fills the abyss of sin with the depth of his mercy.
Saint Bernard, in one of his commentaries on the Canticle of Canticles (Sermon 61, 3-5: Opera Omnia, 2, 150-151), reflects precisely on the mystery of the Lord’s wounds, using forceful and even bold expressions which we do well to repeat today.  He says that “through these sacred wounds we can see the secret of [Christ’s] heart, the great mystery of love, the sincerity of his mercy with which he visited us from on high”.
Brothers and sisters, behold the way which God has opened for us to finally go out from our slavery to sin and death, and thus enter into the land of life and peace.  Jesus, crucified and risen, is the way and his wounds are especially full of mercy.
The saints teach us that the world is changed beginning with the conversion of one’s own heart, and that this happens through the mercy of God.  And so, whether faced with my own sins or the great tragedies of the world, “my conscience would be distressed, but it would not be in turmoil, for I would recall the wounds of the Lord: ‘he was wounded for our iniquities’ (Is 53:5). What sin is there so deadly that it cannot be pardoned by the death of Christ?” (ibid.).
Keeping our gaze on the wounds of the Risen Jesus, we can sing with the Church: “His love endures forever” (Ps 117:2); eternal is his mercy.  And with these words impressed on our hearts, let us go forth along the paths of history, led by the hand of our Lord and Saviour, our life and our hope.

Message of Pope Francis to Armenians
Pope Francis delivered a Message to all Armenians on Sunday, presenting the President of Armenia, Serž Azati Sargsyan, Catholicos Karekin II, Catholicos Aram I, and Patriarch Nerses Bedros XIX, with copies at the end of Mass marking the centenary of the Medz Yeghern in which more than 1 million Armenians under Ottoman rule were driven from their homes, dispossessed and killed. Below, please find the full text of the Message in its official English translation.