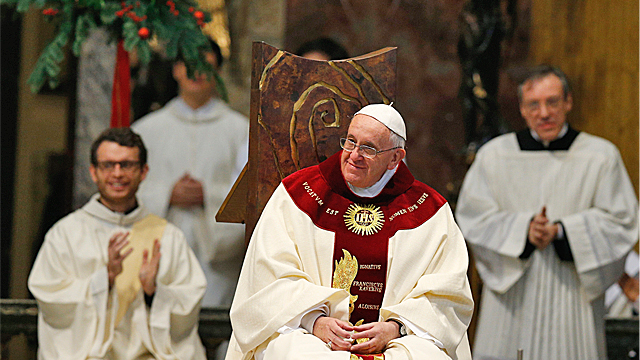 By Peter Schineller, S.J.
The first Jesuit Pope! We have moved beyond the original surprise and shock. What does it mean? How is Pope Francis deeply Ignatian and deeply Jesuit? I see one key link between Francis and Ignatius, a link that Francis himself has pointed. It is found in a Latin phrase, not easily translated, which Pope Francis has quoted several times.

“Non coerceri maximo, contineri tamen a minimo, divinum est.” “To suffer no restriction from anything however great, and yet to be contained in the tiniest of things, that is divine.”

The maxim was composed in 1640 as a way to describe the genius of St. Ignatius - his ability to hold together the great and the small, the global and the local, in a tension of seemingly opposites. Ignatius, with his world wide vision and desire to set the world on fire, could spend the last 16 years of his life working from his room in Rome composing the Jesuit Constitutions. The Ignatian scholar Hugo Rahner incidentally wrote that “no description of Ignatius has ever equalled these words.”
This maxim cited by Pope Francis shows, I believe, how he sees himself in accord with the mind and heart of St. Ignatius. The pope tries to keep in mind great visions and dreams, the larger picture, but at the same time, he urges us to reach down and out to the peripheries, to serve the needy and vulnerable. Thus in an essay of 1981 entitled “Leadership: The Big Picture and the Tiny Detail,” Bergoglio writes that in the maxim “Non coerceri maximo, contineri tamen a minimo, divinum est, we find a happy balance in the heart’s attitude towards things great and small." He explains that Ignatius was able to combine severity with sweetness, rigor with gentleness. He was always ready to make exceptions. The key is discernment, first know what is big and what is little, and then to correct the big, and gloss over the small, always keeping the whole, the larger picture in mind.
In his book Open Mind, Faithful Heart then Archbishop Bergoglio speaks against apathy: “Occasionally it reveals itself in those who elaborate magnificent plans without any concern for the concrete means by which they will be realized. Conversely, it is seen in those who get so wrapped up in the minutiae of each moment that they cannot see beyond them to the grand plan of God. We do well to recall the epigram attributed to Saint Ignatius: ‘not being overwhelmed by what is greatest, while still being attentive to what is smallest - that is divine’.”
In June 2013 Pope Francis calls for students to be magnanimous.

"Magnanimity: this virtue of the great and the small (Non coerceri maximo contineri minimo, divinum est), which always makes us look at the horizon… means having a great heart, having greatness of mind; it means having great ideals, the wish to do great things …Hence also, to do well the routine things of life… doing the little everyday things with a great heart open to God and to others."

He echoes this in an interview in America Magazine, entitled “A Big Heart Open to God." When asked “what does it mean for a Jesuit to be pope?” he replies:

I was always struck by a saying that describes the vision of Ignatius: (‘not to be limited by the greatest and yet to be contained in the tiniest – this is the divine’). ….it is important not to be restricted by a larger space, and it is important to be able to stay in restricted spaces.

In his Apostolic Exhortation Evangelii Gaudium he writes that “We need to pay attention to the global to avoid narrowness and banality. Yet we also need to look to the local, which keeps our feet on the ground ”(No. 234). We must see and seek the greater good but must also work on a small scale, in our own neighborhood, always keeping the large perspective in mind (No. 235).
Preaching during Advent 2013, Pope Francis explains that at Christmas:

“God, in the Christmas mystery, reveals himself not as One who remains on high and dominates the universe, but as the One who bends down, descends to the little and poor earth, …to be like him, we should not put ourselves above others, but indeed lower ourselves, place ourselves at the service of others, become small with the small and poor with the poor….”

In February 2014, addressing newly created cardinals, Pope Francis refers to the words of St. Paul on charity linking them with the maxim describing St. Ignatius:

It means being able to love without limits, but also to be faithful in particular situations and with practical gestures. It means loving what is great without neglecting what is small; living the little things within the horizon of the great things, since ‘non coerceri maximo, contineri tamen a minimo divinum est’.

In my view, it is significant, amazing and not accidental that Pope Francis has frequently referred to the maxim. As Pope and as Jesuit, he is following the example of St. Ignatius who quietly worked in his room in Rome, writing and refining the myriad of details in the Constitutions, and at the same time sent Xavier around the globe to the Indies. Ignatius worked with kings and princes, popes and bishops, but at the same time ministered to the least, the women of the streets of Rome.
Pope Francis keeps the big picture in mind as he calls together the group of nine cardinals as a type of cabinet to advise him, as he strives to reform and renew the Roman curia, as he appoints new cardinals from the peripheries. Daily he meets with heads of state, church leaders and world leaders. At the same time, in his pastoral visits he instinctively reaches out to the handicapped, the child, the sick, the elderly. He visits prisoners and soup kitchens, He travels simply in a Ford Focus. For Pope Francis, as for Jesus, the child is the least and the greatest. The weak and the handicapped are the most precious and most important.
The ongoing challenge facing Pope Francis, St. Ignatius - indeed, any leader, is to keep the larger or greater in mind, and at the same time take into account the little ones - the poor, the needy - those Jesus Christ identifies with. Nothing, no one is too small; in fact, the smaller and weaker, the more he or she calls forth our Christian response!
The Year of Mercy declared by Pope Francis is one way to urge and encourage the faithful to put on Christ, the Christ who reaches down and out to the poor and needy. This is the Christ enshrined in the maxim: “Not to be restrained by what is greatest, yet to be contained by what is least - that is divine.”
--
CNS photo/Paul Haring
Fr. Peter Schineller, a Jesuit priest from New York, after teaching theology at seminaries in the USA, (Chicago and Boston) Africa (East and West Africa) and Vietnam, is now assisting at the Jesuit Center and Sacred Heart Parish, an English-language parish in Amman, Jordan.