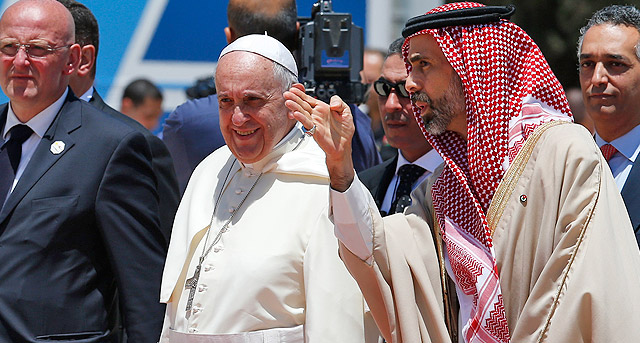 Pope Francis has arrived in Jordan, the first leg of his three-day pilgrimage to the Holy Land. He will also visit Palestine and Israel before returning to Rome on Monday evening.
Following the arrival ceremony at the airport in the Jordanian capital of Amman, he made his way to the Royal Palace for the meeting with King Abdallah II, the Royal Family and Jordanian authorities.  The King's address to the Pope is not yet available.  Below find the English translation of Pope Francis' address in Italian.

Your Majesties,
Your Excellencies,
Dear Brother Bishops,
Dear Friends,
I thank God for granting me this opportunity to visit the Hashemite Kingdom of Jordan in the footsteps of my predecessors Paul VI, John Paul II and Benedict XVI.  I am grateful to His Majesty King Abdullah II for his warm words of welcome, as I recall with pleasure our recent meeting in the Vatican.  I also greet the members of the Royal Family, the government and the people of Jordan, this land so rich in history and with such great religious significance for Judaism, Christianity and Islam.
Jordan has offered a generous welcome to great numbers of Palestinian and Iraqi refugees, as well as to other refugees from troubled areas, particularly neighboring Syria, ravaged by a conflict which has lasted all too long.  Such generosity merits the appreciation and support of the international community.  The Catholic Church, to the extent of its abilities, has sought to provide assistance to refugees and those in need, especially through Caritas Jordan.
While acknowledging with deep regret the continuing grave tensions in the Middle East, I thank the authorities of the Kingdom for all that they are doing and I encourage them to persevere in their efforts to seek lasting peace for the entire region.  This great goal urgently requires that a peaceful solution be found to the crisis in Syria, as well as a just solution to the Israeli-Palestinian conflict.
I take this opportunity to reiterate my profound respect and esteem for the Muslim community and my appreciation for the leadership of His Majesty the King in promoting a better understanding of the virtues taught by Islam and a climate of serene coexistence between the faithful of the different religions.  I am grateful that Jordan has supported a number of important initiatives aimed at advancing interreligious dialogue and understanding between Jews, Christians and Muslims.  I think in particular of the Amman Message and the support given within the United Nations Organization to the annual celebration of World Interfaith Harmony Week.
I would also like to offer an affectionate greeting to the Christian communities present in this country since apostolic times, contributing to the common good of the society of which they are fully a part.  Although Christians today are numerically a minority, theirs is a significant and valued presence in the fields of education and health care, thanks to their schools and hospitals.  They are able to profess their faith peaceably, in a climate of respect for religious freedom.  Religious freedom is in fact a fundamental human right and I cannot fail to express my hope that it will be upheld throughout the Middle East and the entire world.  The right to religious freedom “includes on the individual and collective levels the freedom to follow one’s conscience in religious matters and, at the same time, freedom of worship… [it also includes] the freedom to choose the religion which one judges to be true and to manifest one’s beliefs in public” (Ecclesia in Medio Oriente, 26).  Christians consider themselves, and indeed are, full citizens, and as such they seek, together with their Muslim fellow citizens, to make their own particular contribution to the society in which they live.
Finally, I cordially invoke peace and prosperity upon the Kingdom of Jordan and its people. I pray that my visit will help to advance and strengthen good and cordial relations between Christians and Muslims.
I thank you for your courteous welcome.  May the Almighty and Merciful God grant happiness and long life to Your Majesties, and may he bless Jordan abundantly.  Salaam!

- Photo Credit: Pope Francis is welcomed by Jordan's Prince Ghazi bin Muhammad bin Talal upon his arrival at Queen Alia International Airport in Amman May 24. The pope is making a three-day visit to the Holy Land, spending one day each in Jordan, the Palestinian territo ries and Israel. (CNS photo/Paul Haring)