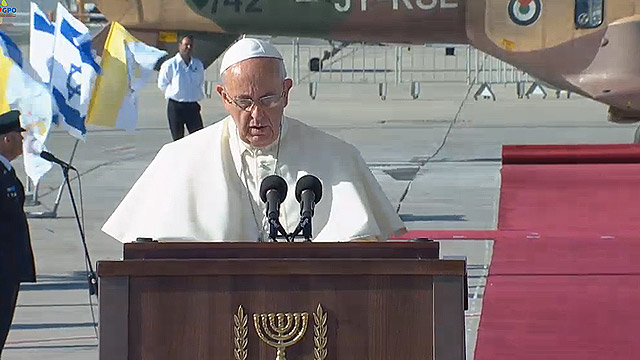 Pope Francis arrived by helicopter, from Bethlehem in the West Bank to the Israeli international airport near Tel Aviv. Upon his arrival at the airport around 4:30 this afternoon, he was greeted by Israeli Prime Minister Shimon Peres and other Israeli government authorities.

Mr. President,
Mr. Prime Minister,
Your Excellencies,
Ladies and Gentlemen,
I thank you most heartily for your welcome to the State of Israel, which I have the joy of visiting on this pilgrimage. I am grateful to President Shimon Peres and to Prime Minister Benjamin Netanyahu for their kind words and I willingly recall my meetings with them in the Vatican. As you know, I have come on pilgrimage to mark the fiftieth anniversary of the historic visit of Pope Paul VI. Since then, much has changed in the relationship between the Holy See and the State of Israel: diplomatic relations, established some twenty years ago, have favoured the development of good relations, as witnessed by the two Agreements already signed and ratified, and a third which is in the process of being finalized. In this spirit I greet all the people of Israel with prayerful good wishes that their aspirations of peace and prosperity will achieve fulfilment.
In the footsteps of my predecessors, I have come as a pilgrim to the Holy Land, rich in history and home to the principal events in the origin and growth of the three great monotheistic religions, Judaism, Christianity, and Islam. As such, it is of immense spiritual significance for a great part of humanity. So I express my hope and prayer that this blessed land may be one which has no place for those who, by exploiting and absolutizing the value of their own religious tradition, prove intolerant and violent towards those of others.
During my pilgrimage to the Holy Land I will visit some of the most significant places in Jerusalem, a city of universal importance. Jerusalem, of course, means “city of peace”. This is what God wills it to be, and such is the desire of all people of good will. Yet sadly Jerusalem remains deeply troubled as a result of longstanding conflicts. We all know how urgent is the need for peace, not only for Israel but also for the entire region. May efforts and energies be increasingly directed to the pursuit of a just and lasting solution to the conflicts which have caused so much suffering. In union with all men and women of good will, I implore those in positions of responsibility to leave no stone unturned in the search for equitable solutions to complex problems, so that Israelis and Palestinians may live in peace. The path of dialogue, reconciliation and peace must constantly be taken up anew, courageously and tirelessly. There is simply no other way. And so I renew the appeal made in this place by Pope Benedict XVI: the right of the State of Israel to exist and to flourish in peace and security within internationally recognized borders must be universally recognized. At the same time, there must also be a recognition of the right of the Palestinian people to a sovereign homeland and their right to live with dignity and with freedom of movement. The “Two State Solution” must become reality and not remain merely a dream.
A particularly moving part of my stay will be my visit to the Yad Vashem Memorial to the six million Jews who were victims of the Shoah, a tragedy which is the enduring symbol of the depths to which human evil can sink when, spurred by false ideologies, it fails to recognize the fundamental dignity of each person, which merits unconditional respect regardless of ethnic origin or religious belief. I beg God that there will never be another such crime, which also counted among its victims many Christians and others. Ever mindful of the past, let us promote an education in which exclusion and confrontation give way to inclusion and encounter, where there will be no place for anti-Semitism in any of its forms or for expressions of hostility, discrimination or intolerance towards any individual or people.
With a deeply saddened heart, I think of all of those who lost their lives in yesterday’s savage attack yesterday in Brussels. In renewing my deep sorrow for this criminal act of anti-semitic hatred, I commend to our merciful God the victims and pray for the healing of those wounded.
Although my brief visit makes it impossible to meet everyone, I would like even now to greet all Israel’s citizens and to express my closeness to them, particularly those living in Nazareth and in Galilee, where many Christian communities are found.
To the Bishops and the Christian faithful I offer a warm and fraternal greeting. I encourage them to persevere in their quiet witness of faith and hope in the service of reconciliation and forgiveness, following the teaching and example of the Lord Jesus, who gave his life to bring about peace between God and man, and between brothers. May you always be a leaven of reconciliation, bringing hope to others, bearing witness to charity! Know that you are constantly in my prayers.
Mr President, Mr Prime Minister, Ladies and Gentlemen, I thank you once again for your kind welcome.
May peace and prosperity descend in abundance upon Israel. And may God bless his people with peace! Shalom!