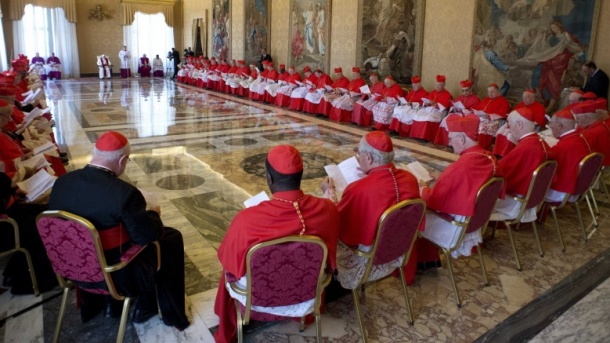 Pope Francis announced the names of the 19 new cardinals he will create in the upcoming February 22 consistory. One of the prelates who will receive a red hat is Archbishop Gerald Lacroix of Quebec City.
The pope announced the names after leading the Angelus prayer on January 12.
Out of the 19 prelates who will join the College of Cardinals only 16 are eligible to vote in conclave. Only one of the 16 voting-age cardinals is from North America. Latin America is the most represented region among the new cardinals.
From North America, only Archbishop Gerald Lacroix of Quebec City will become cardinal.
Five members of the Roman Curia will become cardinals:  the Vatican’s Secretary of State, Archbishop Pietro Parolin,58; the head of the Synod of Bishops, Archbishop Lorenzo Baldisseri,73; Archbishop Beniamino Stella, 72, Prefect of the Congregation for the Clergy and Archbishop Gerhard Muller, 66, Prefect of the Congregation for the Doctrine of the Faith.
The presence of Latin Americans in the college of cardinals will increase with the addition of five new cardinals from that region. One of the new Cardinals is Archbishop Mario Poli, 65 of Buenos Aires. Pope Francis appointed Archbishop Poli to replace him in Buenos Aires just two weeks after he was elected pope. Archbishop Orani Joao Tempesta, 63, of Rio de Janeiro will also be elevated.
The three other cardinals from Latin America are:
The other Cardinals from Latin America are:
Archbishop Ricardo Ezzati Andrello, 72, of Santiago de Chile, Chile
Bishop Chibly Langois, 55, of Les Cayes, Haiti
Archbishop Leopoldo Brenes Solorzano,64, of Managua, Nicaragua
Two Europeans will recieve a red hat:  Italian Archbishop Gualterio Bassetti of Perugia-Citta del Pieve and Archbishop Vincent Nichols,68, from the British Archdiocese of Westminster.
Ivory Coast will have a Cardinal, Archbishop Jean-Pierre Kutwa, 68 of Abidjan as will Burkina Faso with the elevation of Archbishop Philippe Nakellentuba Ouédraogo,68, of Ouagadougou.
Asia receives two cardinals: Archbishop  Orlando B. Quevedo, 74, of Cotabato, Philippines, and Archbishop Andrew Yeom Soo jung,70, of Seoul, Korea.
Three prelates over 80 will also be made cardinals They will not be eligible to vote in a conclave. Pope Francis said he is elevating them in recognition of their work for the Church. The three non-voting cardinals are:
Archbishop Loris Capovilla, 98, formerly of Loreto, Italy. Arcbishop Capovilla was the personal secretary of Pope John XXIII.
Archbishop Fernando Sebastian Aguilar, Archbishop Emeritus of Pamplona, Spain.
Archbishop Kelvin Felix, 80, Archbishop Emeritus of Castires, Antilles.
The consistory will take place February 22 at the Vatican. The date of the consistory was announced last year.
.