Pope Francis and the Order of Malta 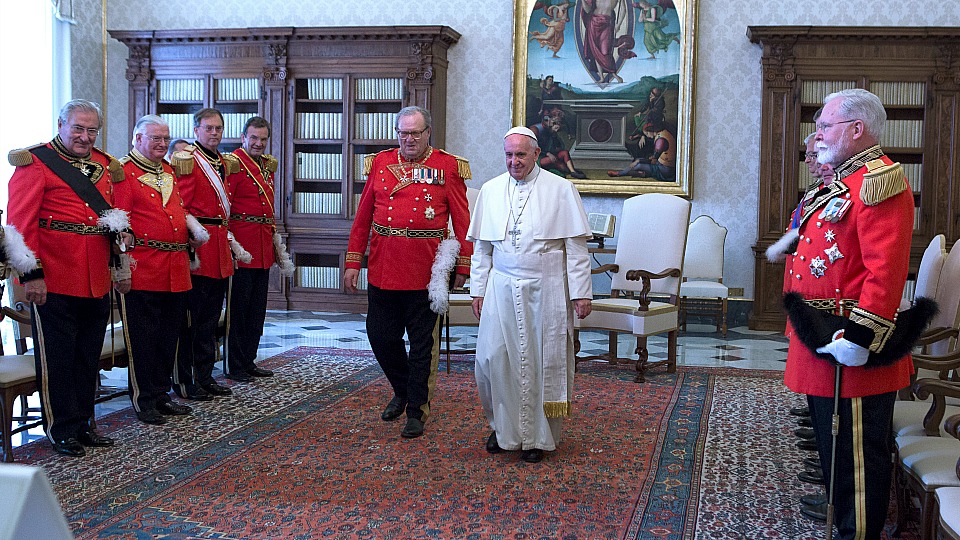 CNS photo/Maria Grazia Picciarella, pool
The Vatican released a statement Tuesday morning, regarding the Sovereign Military Order of Malta, saying the Holy See “wishes to reiterate its support and encouragement for the commendable work that members and volunteers carry out in various parts of the world, in fulfilment of the aims of the Order.” The statement came during a recent clash between the Holy See and the Order, over the wrongful dismissal of their Grand Chancellor, last December. The Vatican’s press release was a response to a statement made by the Order’s Grand Master Fra Matthew Festing, who said that the Order won’t cooperate with the committee established by the Holy See to clarify the removal of Grand Chancellor Albrecht Freiherr von Boeselager. It all started with the forced resignation of the Grand Chancellor, who is presumably guilty of having distributed contraceptives during humanitarian initiatives in Myanmar in recent years. The Grand Chancellor has denied this, adding he was unaware of the issue and intervened immediately when he learned the fact. At the moment, the Order wants to reaffirm its sovereignty asking the Pope to not interfere in their affairs; however, the Pope’s involvement in the dismissal of some knights began at the request of the Order’s patron Cardinal Raymond Burke. The Order's patron was received in a private audience by the Holy Father last November, asking permission to remove the Grand Chancellor from his position. In recent weeks, new details emerged. On December 21st, the Secretary of State Cardinal Pietro Parolin sent a letter to the Grand Master Fra Matthew Festings, saying that the Pope did not want the removal of the Grand Chancellor. Cardinal Burke had asked the Pope’s approval to proceed with the expulsion of several members of the Order, including the Chancellor. The Holy Father intervened, and advised the Order to go back to its founding principles and solve the matter internally, without expulsions. At the time of the Grand Chancellor’s removal, to justify the fact, the Pope was quoted as having endorsed it, which the Holy See denied through Cardinal Parolin’s letter before Christmas. The Order refused to cooperate with the Holy See out of fear it is intruding on its autonomy, a difficult position to be in for both parties. The Vatican commission explained that “This is not about interfering in the internal affairs of the order because the purpose of the commission, as is evident, is to give an account to the Holy Father on the procedures used to remove the Grand Chancellor and nothing else”. What the Holy See hopes for now is the “complete cooperation of all in this sensitive stage.”

For more on the Order of Malta, catch Vatican Connections Fridays at 8 pm ET!