Pope Francis, the death penalty, and the development of doctrine 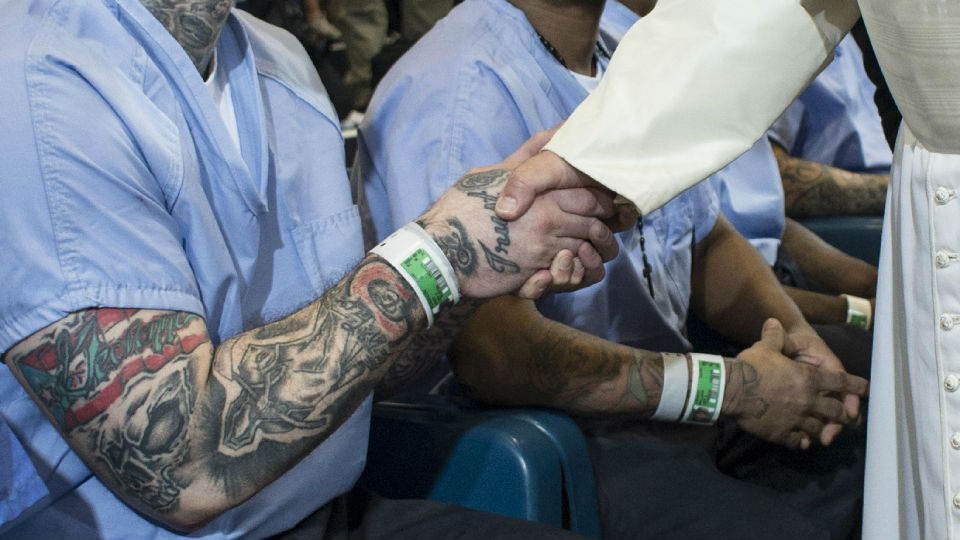 (CNS Photo: Pope Francis shakes hands with an inmate at the Curran-Fromhold Correctional Facility in Philadelphia, PA Sept. 27, 2015.)
“It is not that the Gospel has changed: it is that we have begun to understand it better,” ruminated Pope John XXIII on his deathbed in May 1963. That famous utterance lingered in my mind this past week as I read commentaries on Pope Francis’ recent statement that the death penalty is “inadmissible,” “contrary to the Gospel,” and must be given a “more adequate treatment” than is currently outlined in the official Catechism of the Catholic Church. Francis was speaking at a meeting to celebrate the twenty-fifth anniversary of the promulgation of the Catechism at the Vatican. “It must be clearly stated that the death penalty is an inhumane measure that, regardless of how it is carried out, abases human dignity,” the Pope declared, adding that, “doctrine cannot be preserved without allowing it to develop, nor can it be tied to an interpretation that is rigid and immutable without demeaning the working of the Holy Spirit.” In the past, the Catholic Church has taught that recourse to the death penalty is admissible in certain cases to protect other human beings and the common good. Pope John Paul II tweaked the Catechism back in the 1990s to stress that such cases are today “very rare, if not practically non-existent.” But Francis has taken a further step by declaring the death penalty inadmissible in all cases. As might be expected, the Pope’s words set off a debate in the Catholic world about what sort of “development” in official teaching this is. Clearly, Francis wants the Church’s teaching on capital punishment to be updated in the Catechism. Yet in his address he confidently stated he was not, “in any way contradicting past teaching,” and that his request “in no way represents a change in doctrine.” Here are a few critical points to consider on this possible development in Church teaching: Having said relatively little about capital punishment up to this point, I’ll conclude by sharing some of my own thoughts on the topic in the life of the Church today: I’ve always wondered why the obvious connection between Jesus’s death and capital punishment isn’t referenced more frequently in this discussion. Jesus did not leave behind a reference book with answers to every difficult moral question that would arise in future eras. We don’t know what he would have said about nuclear weapons, for example, or about the manner in which capital punishment is used in various countries today. It’s up to the Church to interpret the signs of the times in light the Gospel. But the connection here seems obvious. Capital punishment is as old as human civilization, and Christianity is in the rather curious position of worshiping a man who was sentenced to death by the state. It’s true that Jesus didn’t explicitly condemn capital punishment. It’s true that he was explicitly condemned by it. The nature of Jesus’s death by capital punishment has always made me uncomfortable with its continued use. If there’s one thing that jumps off the pages of the passion narratives (especially in Luke’s Gospel), it is Jesus’s innocence, and by association, the guilt of the authorities who unjustly pursued and procured his state-sanctioned execution. There’s something enduring about that infamous injustice of putting an innocent man to death. Modern science and DNA testing have shown us how the trend continues. But I sometimes think the very fact that we are capable of putting an innocent person to death, as Jesus was, suggests that human beings should never use their power to do so. Jesus’s death teaches us, among so many other things, that we are not God; that when we pass our judgement or impose our will over another human being, we will probably get it wrong, and rather than achieve justice we destroy it. The crucifixion scene with the penitent criminal at the end of Luke’s Gospel may be the most poignant pro-life statement in the New Testament. The self-admitted criminal asks Jesus to remember him when he enters his kingdom. Dying on the cross, Jesus promises him paradise that very day. What does this say about the death sentences procured by the authorities? They got it wrong twice; even when they got it right—in the case of the criminal—they got it wrong. In God’s eyes, neither the execution of the innocent man nor of the guilty man is justified. “The death penalty is contrary to the Gospel,” Francis says, “because it entails the willful suppression of a human life that never ceases to be sacred in the eyes of its Creator and of which—ultimately—only God is the true judge and guarantor.”