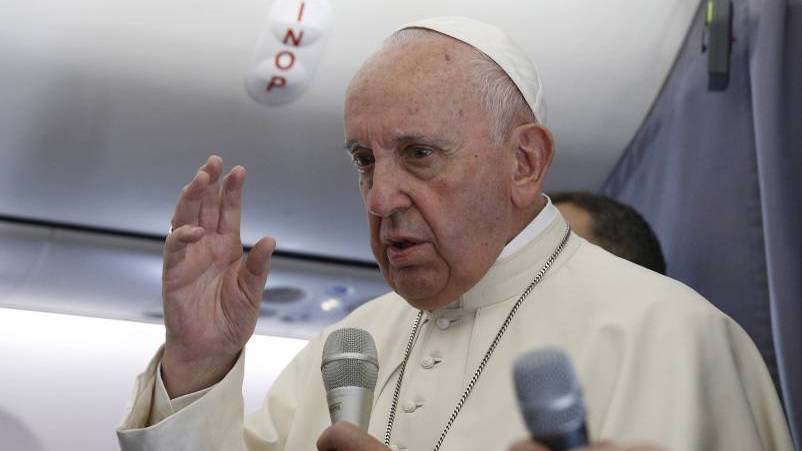 Pope Francis answers questions from journalists aboard his flight from Sibiu, Romania, to Rome on June 2, 2019. (CNS photo/Paul Haring)
I recently wrote a reflection for the Feast of the Visitation (May 31) for the Catholic prayer book, Give Us This Day. In it, I suggested that Mary is considered the “model disciple” precisely because she welcomed the new things God was doing in her life. And beyond that, that our dogmatic teachings about Mary (immaculately conceived, ever-virgin mother of God, etc.) have actually indoctrinated newness within the Catholic tradition.
A few days later on June 2, Pope Francis returned to Rome from Romania. It was a beautiful visit for many reasons, but as so often happens, it was overshadowed to some degree by his theologically colourful press conference aboard the flight back to the Vatican. Specifically, what he said about the Catholic “tradition” is worth reflecting upon.
During the in-flight Q&A, the pope commented on the state of politics in Europe saying, “There is the sickness of corruption in the politics…everywhere,” and pleaded that Europe not be “overcome by pessimism and ideologies.”
Francis also weighed in on the work of Christian unity, particularly between Catholics and Orthodox churches (Romania is a predominantly Orthodox country), reiterating his long held opinion that Christians should not wait for theologians to agree on an understanding of the Eucharist in order to collaborate and pray together. When asked about the concerns some Orthodox and Catholics had about reciting the Our Father together in Bucharest's Orthodox Cathedral, the pope turned it around: “Even us Catholics, we have closed people… that say that the Orthodox are schismatics… These Catholic groups are a little bit fundamentalist. We should tolerate them, pray for them, so that the Lord with the Holy Spirit softens their hearts.”
He also spoke about his relationship with Pope Emeritus Benedict XVI, which, to the great perplexity of some Catholics who pit the two against each other, is remarkably fraternal and fruitful: “When I hear him speak, I become strong. I hear this history of the Church, which is not something like a museum, tradition… No, tradition is like a root which gives us the juice to grow… The tradition of the Church is always in motion.”
Taken together, these comments relay an important lesson in ecclesiology that relates to my original reflections about Marian doctrines.
Typically, the type of comments we heard from Pope Francis aboard the plane are interpreted as “liberal,” or even “unorthodox,” i.e. that he is departing from traditional Catholic positions.
In reality, the opposite is the case. To say that “tradition is like a root which gives us the juice to grow,” implies that our human understanding of the realities of God is not exhausted. As history progresses and the pilgrim church matures, we grow in our understanding of the mysteries of God. This reading of “tradition” is grounded in humility and awe before the Creator of the universe.
When Francis speaks of some Catholics who are “a bit closed” and “a bit fundamentalist,” he is referring to a way of interpreting “tradition” as immutability, which he believes resists the free-flowing workings of the Holy Spirit (though he still believes the Holy Spirit can touch a hardened heart).
In the story of the Visitation, Mary encounters a God who is doing new and impossible things in her life. How can we expect such a God to sit on his hands, so to speak, for the rest of history? A criterion of Christian doctrine seems to be newness. Or, put another way, in Christianity newness itself becomes indoctrinated.
Pope Francis speaks very freely and often without prepared remarks. But we should not presume his theology and understanding of tradition are “liberal” or “unorthodox”. His openness to the Spirit is fundamentally Christian and modelled after the “model disciple” herself. As he himself stated in a recent interview, “I am conservative.”