Pope Francis' Address to the Chief Rabbis of Israel 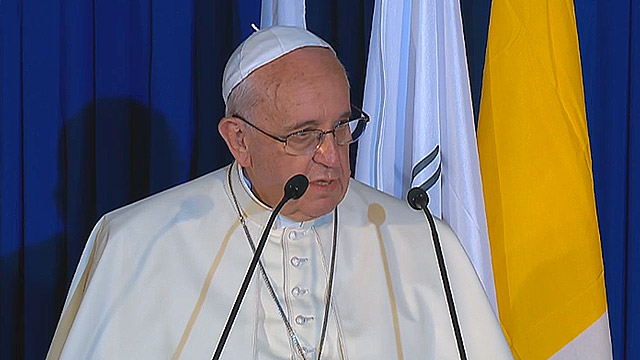 Address of His Holiness Pope Francis
To the Two Chief Rabbis of Israel
Jerusalem, 26 May 2014
Distinguished Chief Rabbis of Israel,
I am particularly pleased to be here with you today.  I am grateful for your warm reception and your kind words of welcome.
As you know, from the time I was Archbishop of Buenos Aires, I have counted many Jews among my friends.  Together we organized rewarding occasions of encounter and dialogue; with them I also experienced significant moments of sharing on a spiritual level.  In the first months of my pontificate, I was able to receive various organizations and representatives from the Jewish community worldwide.  As was the case with my predecessors, there have been many requests for such meetings.  Together with the numerous initiatives taking place on national and local levels, these testify to our mutual desire to know one another better, to listen to each other and to build bonds of true fraternity.
This journey of friendship represents one of the fruits of the Second Vatican Council, and particularly of the Declaration Nostra Aetate, which proved so influential and whose fiftieth anniversary we will celebrate next year.  I am convinced that the progress which has been made in recent decades in the relationship between Jews and Catholics has been a genuine gift of God, one of those great works for which we are called to bless his holy name: “Give thanks to the Lord of lords, for his love endures forever; who alone has wrought marvellous works, for his love endures forever” (Ps 135/136:3-4).
A gift of God, yes, but one which would not have come about without the efforts of so many courageous and generous people, Jews and Christians alike.  Here I would like to mention in particular the growing importance of the dialogue between the Chief Rabbinate of Israel and the Holy See’s Commission for Religious Relations with the Jews.  Inspired by the visit of Pope John Paul II to the Holy Land, this dialogue was inaugurated in 2002 and is already in its twelfth year.  I would like to think that, in terms of the Jewish tradition of the Bar Mitzvah, it is just coming of age.  I am confident that it will continue and have a bright future in years to come.
We need to do more than simply establish reciprocal and respectful relations on a human level: we are also called, as Christians and Jews, to reflect deeply on the spiritual significance of the bond existing between us.  It is a bond whose origins are from on high, one which transcends our own plans and projects, and one which remains intact despite all the difficulties which, sadly, have marked our relationship in the past.
On the part of Catholics, there is a clear intention to reflect deeply on the significance of the Jewish roots of our own faith.  I trust that, with your help, on the part of Jews too, there will be a continued and even growing interest in knowledge of Christianity, also in this holy land to which Christians trace their origins.  This is especially to be hoped for among young people.
Mutual understanding of our spiritual heritage, appreciation for what we have in common and respect in matters on which we disagree: all these can help to guide us to a closer relationship, an intention which we put in God’s hands.  Together, we can make a great contribution to the cause of peace; together, we can bear witness, in this rapidly changing world, to the perennial importance of the divine plan of creation; together, we can firmly oppose every form of anti-Semitism and all other forms of discrimination.  May the Lord help us to walk with confidence and strength in his ways.  Shalom!