"Pope Francis – A Man of His Word" Movie Review 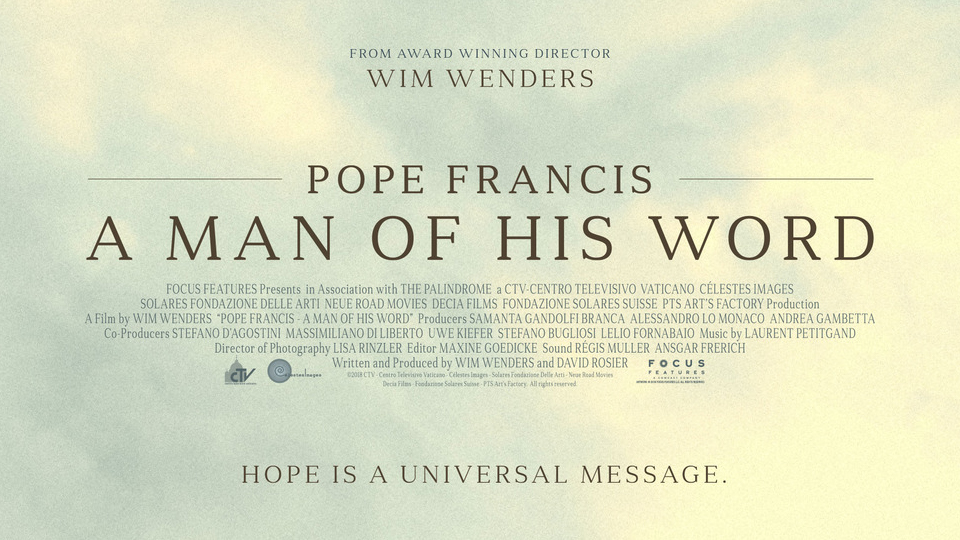 CNS Photo
This week, I had the opportunity to screen an advanced showing of Wim Wenders’ Pope Francis – A Man of His Word. Although I’m definitely not a seasoned film critic, I do pride myself on knowing filmmaking and today’s state of the Catholic Church. This film brings the two together to present us with an intimate portrait of Pope Francis. It’s a complete portrait. I’ve heard others say that the film does not go deep enough or is not “gritty,” but what many don’t realize is that this is Francis’ pontificate — simple and straightforward. It’s what you see, with no deep analyzing or decoding necessary. As for the message presented, it comes to us as a living “apostolic exhortation,” a communication from the pope that does not define Church doctrine but encourages a lifestyle. Wenders has chosen a technique made famous by Errol Morris, sometimes known as direct-to-lens filmmaking. This is where the director films the subject through a two-way mirror known as a teleprompter, in order to create an intimate and personal interview in which the interviewee looks directly into the camera. This film is the closest most people will ever have to an audience with Pope Francis. And it is authentic. When you have an audience with the pope, he looks you directly in the eye. He is fully present to you in that moment, as is the concept of this film. The film isn’t perfect; it’s hard to recall a film that is. And being a filmmaker, I often have the burden of not being able to fully enjoy a film because I dissect, challenge narrative decisions, and think of ways I would do things differently. I tried to put all that aside, but couldn’t get over an element in the film where Wenders used re-enactments to illustrate a parallel between Pope Francis and St. Francis of Assisi. The re-enactments were necessary but just didn’t work for me, as they removed me from the conversation and reminded me that I was in a theatre and not the Vatican Gardens. So I would have approached the re-enactments differently. Perhaps something more abstract, maybe even an animation? The other element that weakened the film for me can only be blamed on myself, or maybe my ancestry — the fact that Pope Francis’ main interview, this most intimate and personal conversation, was in his native tongue, Spanish. The right decision was made to subtitle the film and not dub it, as that would have ruined the whole experience in losing the bond created by this very personal interview style. Still, as a result of the subtitles, I couldn’t refrain from envying my colleagues who understood his words, as there were times I struggled to maintain eye contact with Pope Francis because I had to keep up with the subtitles. I consider John Paul II as the pope of my generation, but it was always an effort to fully absorb his words. I often relied on others to simplify his messages. With Pope Francis, it doesn’t get any simpler. It’s no secret that I highly admire this man and feel that he is the right man at this time in history to lead my Church. I feel that this film does an excellent job of showing us why. Who is this film for? It’s for lapsed and practising Christians, it’s for people who care about society and the world we live in, it’s for the family. It’s for those who struggle to figure out where they belong in this complicated world. And it’s probably for you.

Richard Valenti is a filmmaker and editor at Salt + Light TV. He has been the editor of many S+L productions including Love Is a Choice, Journey of Light, A Hand of Peace, The World I Know, Ends of the Earth, Abraham's Tent, Across the Divide and many others. He is the editor for Salt + Light Media's new production, The Francis Impact.