On Saturday evening in Rome, the story reverberating around the Vatican walls was not the 24 new Cardinals who had just been created, or which Roman church they would be assigned as their titular church. 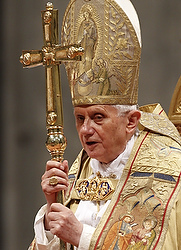 Instead, while the two dozen new Cardinals were meeting and being congratulated by the faithful, the story making headlines on every evening newscast was a quote from the Pope published in L'Osservatore Romano, the Vatican's newspaper. The quote came from the Italian translation of "Light of the World: The Pope, the Church and the Signs of the Times," the book-length interview conducted by German journalist Peter Seewald. The book is set to be released on November 23rd [Note: not the 24th, as previously stated]. Several passages from the book were published in L'Osservatore Romano's Saturday edition. Some of what was published came from the three chapters that a select group of commentators were given permission to quote before the book's official release. At least one part, however, came from a section that was supposed to remain under embargo until Tuesday. In that section, Pope Benedict talks about human sexuality and the Church's position on the use of condoms. He says that focusing exclusively on condoms trivializes the complexity of human sexuality, or "the banalization of sexuality". The Holy Father says that because of this, too many people no longer see sexuality as something that expresses love. Instead, the sexual act is "a sort of drug that people administer to themselves". He goes on to consider the use of condoms in certain individual cases, such as "when a prostitute uses a condom." He said in such a situation, the use of a condom could be a person's "first step" towards taking responsibility for their actions. However, the Pope adds that "it is not really the way to deal with the evil of HIV infection. That can really lie only in a humanization of sexuality." It's a nuanced analysis. The buzz around Rome was first about the Holy Father's statement and, secondly, why L'Osservatore Romano published that section in spite of an agreement between the book's publisher (the Vatican-run Libreria Editrice Vaticana) and the international media. As it turns out, the whole thing was a mistake. According to a Vatican official who asked not to be named, L'Osservatore Romano had been given the same instructions about which sections could be published and when. That same official says "they made a mistake" and included the section on condoms, which was not supposed to be revealed until the day before the book's release. The Vatican publishing house was preparing resources to release to journalists on the 23rd, explaining the nuances of the Pope's seemingly surprising statement about the use of condoms. They did give several media outlets advance copies of that section, but it was strictly under embargo. The mistakes don't end there. In the Italian text published in the L'Osservatore Romano, the Pope considers the question of condom use in the case of "una prostititua". The article una is feminine and thus implies that the prostitute is female. However, in the actual Italian language translation of the Pope's response to the question of condoms, the expression is "uno" therefore making the gender male. (The official English translation also specifies "male prostitute".) The Vatican official said an error was made in text published in L'Osservatore Romano. [Note: at a Nov. 23rd news conference in the Vatican, it was clarified that the incorrect article una does appear in the Italian translation of the book, but that this mistake is being corrected for the second printing. However, the director of the Holy See Press Office explained that the gender of the prostitute in the given example does not change the meaning of the Pope's statement.] Despite the broken embargo, despite a careful publicity strategy getting turned upside down, and despite journalists hyperventilating around the world, at least one Vatican official considers this episode to be "not bad, all things considered." In fact, it could have been much worse. A German Catholic website had posted the entire text of the book on its website for several hours on Friday. They finally took instead of risking legal action by the German distributor of the book. As any communications strategist will tell you, it is better to have the Vatican's own newspaper release such a potentially explosive snippet than for a foreign secular paper break the story, presenting it with less context and inflating it beyond recognition. Whatever one's take, the publicity has been massive. How many people do you know who suddenly want to get their hands on a copy of this book because of this weekend's hullabaloo? - Credit: CNS photo/Paul Haring