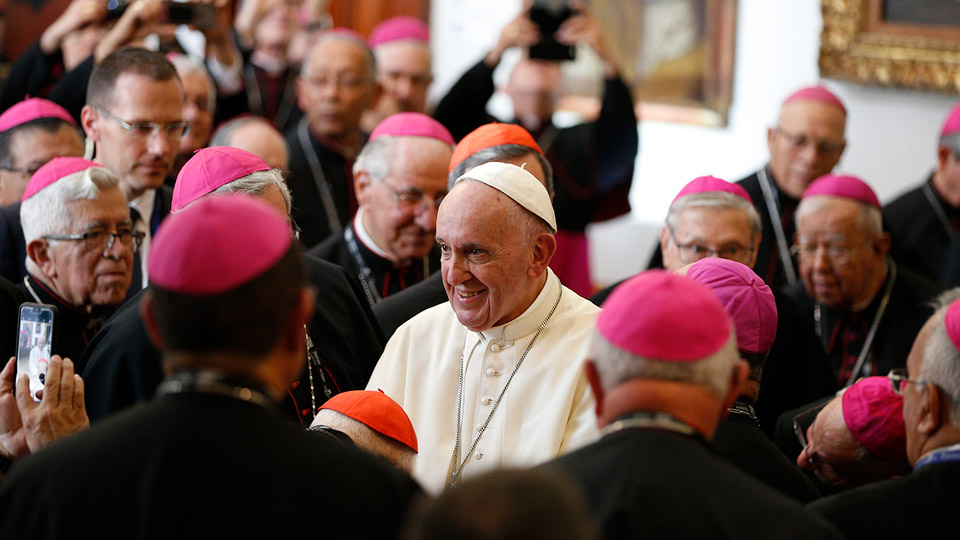 CNS photo/Paul Haring
Following a short address to the youth of Colombia, Pope Francis met with all the Bishops of Colombia in the Cardinals residence. Find the full text of his address below:

The word of reconciliation.

Many people can help with the challenges facing this nation, but your mission is unique. You are not mechanics or politicians, but pastors. Christ is the word of reconciliation written on your hearts. You have the power to preach that word not only in pulpits, in ecclesial documents or newspaper articles, but also in the hearts of individual men and women. You have the power to proclaim it in the inner sanctum of their consciences, where they hope to hear the heavenly voice that proclaims: “Peace to those whom God loves” (Lk 2:14). You must speak that word with the frail, lowly yet invincible resource of God’s mercy, which is capable of averting the pride and cynicism of selfish hearts. The Church seeks only the freedom to speak that word. She has no need for alliances with this or that party, but only the freedom to speak to the heart of every man and woman. There, they are free to face their anxieties; there, they can find the strength to change the course of their lives. The human heart, so often misled, wants to see life as a vast warehouse for depositing everything it accumulates. For this very reason, the question needs to be put: What does it profit a man to gain the entire world, if his soul remains empty? (cf. Mt 16:26). From your lips as legitimate shepherds of Christ, Colombia has a right to be challenged by the truth of God, who never ceases to ask: “Where is your brother?” (cf. Gen 4:9). That question may not be silenced, even if those who hear it can do no more than lower their gaze in embarrassment and stammer in shame that they sold him, perhaps for the price of a fix of narcotics or for some misguided notion of reasons of state, or even for the false belief that the end justifies the means. I ask you to keep your gaze ever fixed on concrete men and women. Do not talk about “man”, but about human persons, loved by God and composed of flesh and bones, history, faith, feelings, disappointments, frustrations, sorrows and hurts. You will see that this concrete approach will unmask cold statistics, twisted calculations, blind strategies and falsified data, and remind you that “only in the mystery of the Word made flesh does the mystery of man truly become clear” (Gaudium et Spes, 22).

A Church on mission: