In 1986 Pope John Paul II became the first Pope to visit the Great Synagogue of Rome. 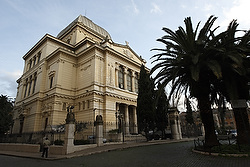 Nearly 24 years later Pope Benedict XVI follows in his predecessor’s footsteps visiting Rome’s synagogue and meeting with leaders of Rome’s Jewish community and the Chief Rabbi of Italy. The Holy Father will also visit the Jewish Museum of Rome, commemorating the history of Jews in Rome, including the closing of the ghetto and the 1984 attack on the Synagogue. The itinerary for the program can be found HERE.  In anticipation of the visit, Catholic News Service also offers THIS interview with the Chief Rabbi of Rome, Rabbi Riccardo Di Segni, and THIS look at the history of Rome's Jewish Ghetto. Join us live on Sunday, January 17th at 10:30am ET, for Pope Benedict XVI's visit to the Great Synagogue of Rome, hosted by Matthew Harrison and featuring commentary from Salt + Light CEO, Fr. Thomas Rosica. - CNS photo/Paul Haring